Book Excerpt from The Continuing Journey of a Different Necromancer 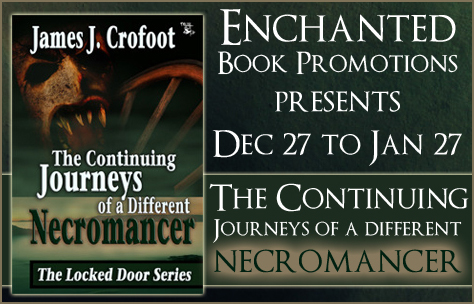 The boy ate solid food finally, while telling Thomas he belonged to the Roma people. The necromancer heard of these people once, but knew little. They kept closely to themselves. The girl, Andrea, had been working very hard to become one of them, Christoff said. Every menial chore put to her, even as low as cleaning excrement houses, she set about with glee at the chance of becoming Christoff’s wife.

As soon as he could ride, the Roma boy saddled his horse. The old woman knew there would be nothing she could say to stop him, but he still leaned heavily against the horse while saddling it.

“Time is short,” he said. “I don’t want to think of what Andrea must be going through. We must ride, Lord Thomas, and we must ride hard.”

“I’m sorry for asking,” Thomas said, giving the horse a sideways glance. “Why are you sure this girl yet lives? This demon of yours will probably have killed her or worse, turned her by now.”

“I’m sure because our witch said she yet lived.” He narrowed his black eyes as

he pulled the cinching strap tight. “The witch said I have strayed from our ways, but if I married her daughter, the girl would be set free. I have to believe she yet lives.” Pulling himself up into the saddle with groan of effort, he held out his hand to help the necromancer up behind him.

Thomas looked at the hand and then the horse. Wishing he could just walk, he sighed and grabbed the Roma boy’s hand.

After a morning of bouncing heavily in the saddle, Thomas spoke.

“You still wish to bring this girl into your people, even though your witch is against you.”

“I have my uncle’s backing. He is very wise, some say crafty.” Christoff laughed. Then, though, he grew deadly serious. “My uncle suspects the witch has made a deal with this nesferatu.”

“How could you think that?” Thomas asked incredulously. “I ask because one doesn’t just make deals with these creatures. She must be either very stupid or very dangerous.”

“I know my uncle is right, because the witch has been trying overly hard to get my father to agree to a marriage between me and her daughter. Ever since she came west from the eastern clans three years ago. She insists her daughter is the only Roma girl worthy.”

“Worthy, what do you mean worthy?”

“I am a prince of the Roma, Lord Thomas.” Christoff bit of a chunk of bread Christina had packed for them. “My father is King of the Western Roma, from the Bluet Mountains to the western sea.” 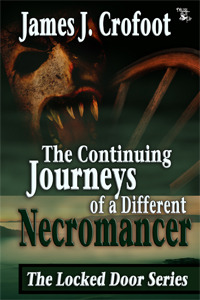 James J has travelled on sea and land, managing to get two degrees and has attended Gotham Writing Workshop. Through it all writing remained his first love. Now he is publishing his work for your enjoyment. ‘The Continuing Journeys of a Different Necromancer’ is the sequel to ‘The Journeys of a Different Necromancer’, both available at MuseItUp publishing, Amazon, Barnes & Noble and Smashswords. He has also appeared in Silverblade Magazine. For notice of further publications, you can find him at www.crofootwrites.com