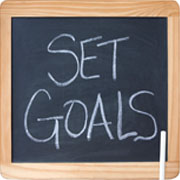 Uhm, 2014? Where the heck did you go? Does anyone else have the feeling time is moving faster and faster each year, as if a day isn’t even a full 24 hours anymore, and a week isn’t even seven days. It’s like everything sped up. Or maybe I’m just getting older. Le sigh. Next year, I’ll turn twenty-five. Twenty freaking five. I can’t believe it. It seems like yesterday when I was eighteen and didn’t have a care in the world. By the rate I’m going, I’ll probably be a grumpy senior by the time I hit thirty. I’ve been upset about this whole turning twenty-five thing for months now, and it’s still seven months away.

Anyway, the age rant isn’t what this post is about. I kind of let myself get carried away there, heh. No, this point is about goals, more precisely, my writing goals for 2015. At this point I’m too chicken to even glance at my goals for 2014 and figured out how horrible I did, but that’s the beauty of a new year – you can start anew. Clean slate.

So here are my goals. If you have a goals post, feel free to link it in the comments. I love to read these things! Because my list is so long, I divided it into categories.

Well, that’s it for me. Still, those are a lot of goals! I hope I can achieve at least some of them. What are your goals for 2015? Feel free to link in the comments.