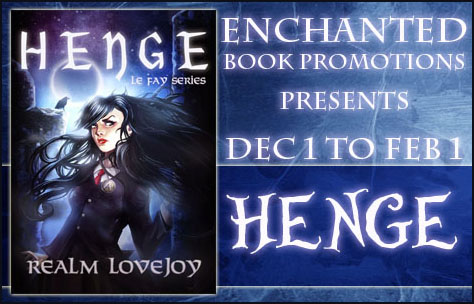 I’m interviewing Realm Lovejoy today, author of YA fantasy novel “Henge”. Welcome to my blog, Realm, and thanks for answering my questions!

Ever since I can remember I was writing and drawing stories. I knew I wanted to be a writer when I was a child and started working on picture books and novels at the age of 11. However it took a long time for me to craft something that I felt could be published. My first serious attempt was made when I hit the age of 22 and drafted Clan, which became my debut novel.

2. Where did you get the inspiration for Henge?

I’ve been itching to write a dark story about rivalry. Morgan le Fay is my favorite Arthurian character and I thought about how frustrated she must be that she’s so powerful, yet Merlin gets all the awesome wizard credit. He’s the famous one everybody knows. I adapted Merlin and Morgan into modern teenagers and as soon as I started writing about them, I couldn’t stop.

Once the first draft is complete, I put it away for a month. I then read it with fresh eyes and make notes on areas that need improvement. I then complete the second draft. That’s the draft I send to an editor, agent, and/or beta reader and get feedback. Then it’s the third draft. After, it’s more revisions, then line edits, copy edits, and proofreading!

Since Henge is the first book in a big series, everything had to be very solid and have depth, especially the protagonist herself. I worked on Morgan le Fay for years, figuring out her mind, her past, and how she develops.

Yes! I finished the revision and published Henge as I planned to.

To publish the next book in the Le Fay Series!

Aside from promoting Henge, I’m second drafting the second book in the Le Fay Series. It’s a lot darker than the first book with a few twists. I’m especially excited about it because the second book is what drove me to write the series in the first place. It’s the big bang that spun out the story in my mind and I can’t wait to share the next book with everyone. It’s coming out in 2015!

For side projects, I am in the progress of adapting my novels into screenplays and graphic novels. 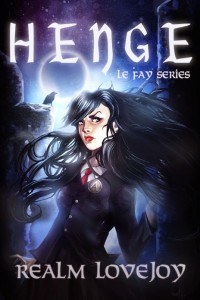 Inspired by one of the greatest legends of all time…

Modern-day Camelot. Where knights no longer carry swords. Magic is dangerous. And those who seek control are not to be trusted.

Sixteen-year-old Morgan le Fay is a fire user. An ordinary girl with an extraordinary skill, she has the ability to create and command fire at will. Her dream is to become the Maven—the right hand of the future King Arthur. In the chance of a lifetime, Morgan is selected to join Arthur’s Round, an elite group of young magic users from which the new Maven will be chosen.

Along with the other fire, water, and wind users in Arthur’s Round, Morgan is rigorously trained and tested. The handsome Merlin, a brilliant water user, takes a particular interest in her. Is his friendship to be trusted, or is Merlin simply trying to win the position of Maven for himself? Among the many rivals Morgan faces is the current Maven, Mordred, who seems determined to see her fail.

But Morgan has a secret—years ago, her mother was executed for using fire magic, and Morgan’s desire for justice makes her more than ready to take on the challenge before her. Can she prevail in Camelot’s tests of survival and magic? Only time—and Morgan’s powerful fire—will tell.

Realm Lovejoy’s modern Arthurian series features one of literature’s most complicated and powerful female figures. Henge is the first book in the LE FAY series, and—like Morgan le Fay’s magic—it is sure to dazzle and amaze.

Realm Lovejoy is an American writer and an artist. She grew up in both Washington State and the Japanese Alps of Nagano, Japan. Currently, she lives in Seattle and works as an artist in the video game industry. CLAN is her first book. You can find out more about her and her book at realmlovejoy.com