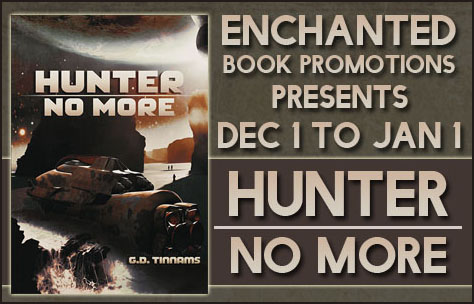 I’m interviewing G.D. Tinnams today, author of science-fiction “Hunter No More”. Welcome to my blog, and thanks for answering my questions.

I don’t remember the exact age, but it was very very young, probably under ten. It was basically an off shoot of being a bookworm, I wanted to write it too.

2. Where did you get the inspiration for Hunter No More?
Humans and machines and how they fit together. Machines can outlive us, out think us, be stronger than us, but can they out feel us? Can they understand emotion or even cope with it? I wanted to explore concepts of emotion, logic and morality underpinned by a direct action framework.
3. What is your editing process like?
Painful. The first draft is the hardest and then it’s taking apart the pieces and making it fit better, making it more detailed and more complete. A first draft is a shadow of the finished novel, but without it there is no novel. You just have to keep going regardless of how bad it is and then when it’s finished you can do something with it. You can tinker to your heart’s content and make it fit your vision of how a novel should be.

4. What was the most challenging part of writing this book?
Finding the time, because there are always other things you could be doing and always this fundamental urge not to do it battling with the need to do it. In the end, once I get the first draft done, I enjoy the tinkering more than the initial writing.

Real life got in the way in 2014, lots of ideas but no story. 2015, I hope will be a different. Ideas are brewing and it’s only a matter of time until they come to fruition. 6. What are your writing goals for 2015?

To write a new novel which will explore different concepts – Like I said, lot of ideas, but no story as of yet. I’ve had some false starts but no momentum.

What can I tell you? Hmmm, something old, something new, something maybe a little scary. I’m a big fan of 50s black and white sf movies which in themselves are offshoots of classic sf concepts. I’d like to go down that road and see what I find. 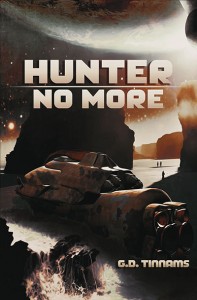 The Hunter Class Spacecraft designated ‘The Amberjack’ disappeared during a routine mission to Seek, Locate and Destroy the enemy Machine Mind contingent known as ‘The Ochre’. Conclusion: It was either destroyed by the Ochre or went rogue for reasons unknown. If sighted, approach with extreme caution.

On the planet Borealis, a violent revolution forces Samantha Marriot and her parents to flee their home for the relative safety of ‘The Rainbow Islands’. Once there, Sam discovers a secret her father has been keeping from her all her life, a secret that will change everything.

Meanwhile, The Machine Mind Hierarchy of Earth dispatches a ship to rid themselves of the planet’s troublesome human population. The only hope of a defence lies with a damaged binary Hunter unit that has long since abandoned both its programming and weaponry.

In order for the unit to succeed it must call upon the aid of an ancient enemy, and prove, once and for all, that it is a Hunter no more. 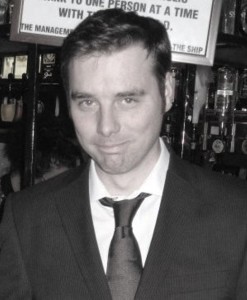 G.D. Tinnams has worked as a barman, a call centre operator, an IT support analyst, and a software tester. But during all this time he was also an insatiable reader of science fiction and fantasy books like Susan Cooper’s ‘The Dark Is Rising Sequence’, Orson Scott Card’s ‘Ender’s Game’, Robert Charles Wilson’s ‘Blind Lake’ and Greg Egan’s ‘Permutation City’. He is very fond of weird, mind-bending stories and decided quite early on to try writing some. ‘Hunter No More’ is his second novel.

Hunter No More on Amazon US

Hunter No More on Amazon UK