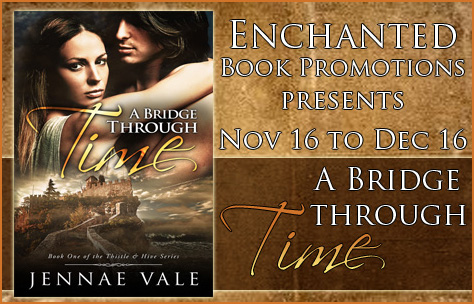 I’m interviewing Jennae Vale, author of time travel romance “A Bridge Through Time”. Welcome to my blog, Jennae, and thanks for answring my questions.

From a very young age I’ve always enjoyed writing. In high school I had a creative writing class and the teacher was inspirational. She really liked my writing and gave me good grades on my work. That got me thinking about it. It took me a long time to get from that point to actually writing and completing my first book.

2. Where did you get the inspiration for A Bridge Through Time?

I love the idea of time travel. I’ve always thought there could be no greater adventure than to be able to go back in time. Since that’s not really a possibility, I started thinking about all the things I like when I read – time travel, romance, the medieval time period and Highlanders, of course. All that put together gave me my inspiration.

My editing process takes place both during the writing and after I’m finished writing. I tend to go back and tweek things as I’m writing, but not so much that it ruins my flow. Then when I’ve completed the book I go through and read it from start to finish at least twice and make corrections as I go. After that I work with an editor who goes through it and fine tunes everything. She makes corrections and suggestions and I fix things on my end
.
4. What was the most challenging part of writing this book?

The most challenging thing for me was saying, “It’s finished.” There’s always the urge to go back in and change something or add something, but at some point I had to let it go so others could read it.

I did. My main goal was to finish A Bridge Through Time, which I did. My next goal was to start Book 2 of The Thistle & Hive Series and I did that as well. I would like to have it finished by January 1, 2015. We’ll see how that goes, but I’m well on my way.

I’m working on Book 2 of The Thistle & Hive series. I can’t tell you too much about it, but it takes place in twenty-first century San Francisco and 16th century Scotland. You’ll meet some new characters and some characters from Book 1 will also make appearances. Our witch, Edna, plays a part in sending a Highlander to San Francisco in search of a wife. 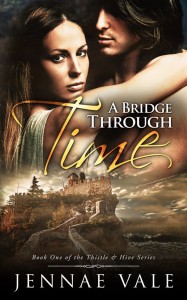 Title: A Bridge Through Time

Ashley Moore’s life in San Francisco has hit a few snags, not the least of which involves sightings of a mystery man around every corner.  Is she losing her mind or does he really exist?   Her search for this grey-eyed stranger leads her to  Scotland. There she meets a witch with a secret, a vindictive English knight who is bent on revenge, and she crosses a fog shrouded bridge into the arms of a 16th century Highlander.

Cailin MacBayne is no stranger to beautiful women, but has always managed to stay one step ahead of commitment.  That all comes to an end when he meets Ashley.  He doesn’t care where this beautiful, yet unusual lass came from, he’s just happy to have found her.  Ashley cannot resist the handsome Scot and finds herself falling hopelessly in love.  In the process, a secret is revealed, a battle is waged and Ashley must ultimately decide whether to return to her own time or give up her 21st century life to stay with the love she has found in the past.

Jennae was born and raised a New England girl, just outside of Boston, Massachusetts, where her imagination was always bigger than she was. Her large, extended Irish and Italian families were a great source of support, inspiration and humor.  Laughter, love and food were never hard to find in her home. Jennae grew up surrounded by nostalgic, historical landmarks, which fed her love of history and creative writing.