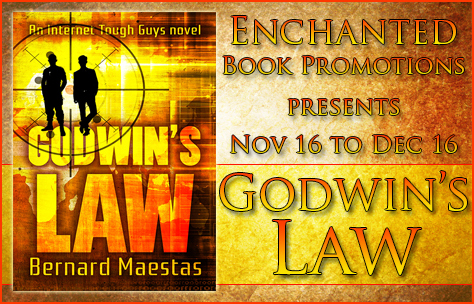 I’m interviewing Bernard Maestas today, author of thriller “Godwin’s Law”. Welcome to my blog, and thanks for answering my questions.

Since I can remember. I’ve been dreaming up stories from my earliest memories (and, I assume, before that). I’ve gone through a variety of mediums over the years. I made comic books most of my life and truly believed that was my calling. Unfortunately, my art never quite kept up with my writing. I made some (award winning) films on my mom’s camcorder as a kid and wanted to go to film school for a five or ten minutes. Ultimately, though, I settled on prose. I think I’m pretty good at it and I’m quite happy with where I ended up!


2. Where did you get the inspiration for Godwin’s Law?

From a lot of places. I tend to grab a bunch of things out of the ether and blend them together to make my stories. In this case, I knew I wanted a start-to-finish chase in the spirit Empire Strikes Back with a globe-hopping tale in place of the galaxy-spanning odyssey. I heard the song “Not Gonna Get Us” by TATU playing over the movie trailer in my head as I was coming up with the plot. Finally, perhaps most importantly, the heroine, Gwen, was inspired by someone very special to me. I was trying to work some things out when I wrote this book and channeling it resulted in the novel Godwin’s Law.

Giving it to my editor and letting her tell me all the mistakes I made, word-by-word, sentence-by-sentence! I can’t edit or proofread myself, I only see it as I wrote it and can’t find the errors. It takes her practiced and brutal analysis to get my words ready for public consumption.


4. What was the most challenging part of writing this series?

Ted’s parts are probably most difficult because he’s smarter than me. It’s not always easy to figure out what he would do or say in a given situation.

Otherwise, writing Godwin’s Law also involved a certain degree of the ripping open of old wounds. That’s never an easy thing to do but art should never be easy. I think every drop of blood I shed on the page was a worthy donation to the cause of a work of art like this book.

Well, I set out to top my productivity from 2013, my most prolific year as a writer. In 2013, I wrote four complete novels, start to finish, including one in a month (the month of February, 28 and not 29 days, just saying). I have fallen pitifully short of that particular goal, only writing two books thus far in the almost finished year.

HOWEVER… I wanted to find that pace again where I finished my unpublished novel Dangerous Boys in a month. I ended up obliterating that. Instead of a month, I wrote my last novel, Concrete Smile, also unpublished, from start to finish, in just one week (well, eight days to be exact).

Of course! I’m always either working on something or trying to work on something, depending on whether the muses have visited me or have abandoned me in the desert. I’m either on an unstoppable writing juggernaut or I’m beating my head against the brick wall of writer’s block. I don’t really have a middle ground.

At the moment, I’m taking a break from thrillers, having written Concrete Smile directly behind the third Internet Tough Guys novel, You Think This is a Game? Currently, I’m writing a fascinating young adult fantasy novel with a slick twist. It’s under the working title OneiroKnights, which is probably going to be the final title if I ever get it published. At least so far, it’s turning out awesome! 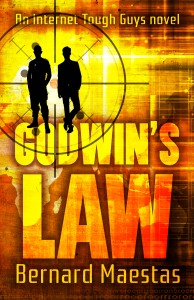