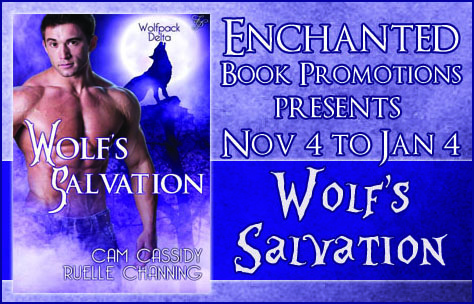 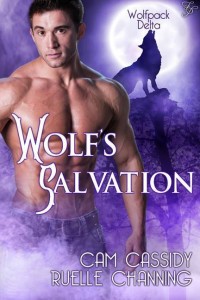 JT Howard’s heart had hardened over the years as he struggled with the demons of his past.  Once he became the Alpha of Wolfpack Delta, he gave it up for a life of quiet solitude.  JT’s solitude is shattered as he finds his pack embroiled in a war.  When he dives into active duty, he will do whatever it takes to protect what is his.

Lou Piacella life has been filled with struggles, each one overcome, but leaving behind a scar that she’s hid behind a smart mouth and cocky attitude.  A tech at MedVision Genetics lab, she finds herself an unwilling ally to the Wolfpack Delta.  Finally released, she thought her life could return to normal.  How could she have been so wrong?

Thrown together by circumstances beyond their control, JT and Lou will be forced to face the demons of their pasts as they struggle to stay one step ahead of MedVision.  Can two people broken over time come together and find salvation one another? 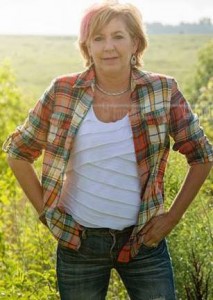 Cam Cassidy grew up in a small Ohio farming community.  The lack of neighbors and companionship of mostly cows, dogs and horses left plenty of time for her passion of reading to flourish.  It wasn’t long before her imagination ran away and she was creating her own stories.

As an adult, Cam is married and the mother of three who loved keeping her on her toes.  The ever present cup of coffee in her hand and notebook in her purse has become a trademark.  While she works full time in the medical field, her spare time is filled reading and writing.  Watching her daughter ride horses, the boys dirt bikes, four wheelers, running around from one sports field to the next, she never missed jotting down that all important plot twist.

Her love romantic suspense and paranormal creatures, werewolves in particular, are showcased in her recent works.  Stay on the look out vampires, some alpha military men and cowboys that are all screaming in her head to get their stories done.

Somewhere between running kids and catching up on laundry, her hard work paid off with her first publication of Wolf’s Heart, co-authored with Ruelle Channing, by Fated Desires Publishing. The second book in the series, Wolf’s Salvation November 2014.

Her solo career begins with A Wolf Awakens, published by Decadent Publishing  coming in 2015 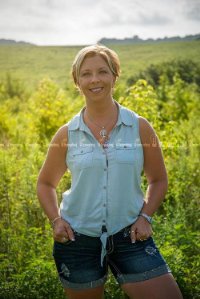 You can win an eBook copy of Wolf’s Salvation by commenting below. Good luck!