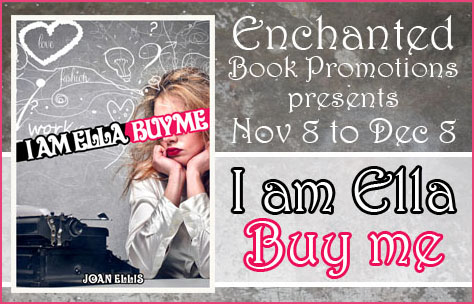 I’m interviewing Joan Ellis today, author of chick lit / humor / romance novel “I am Ella. Buy Me”. Welcome to my blog, Joan, and thanks for answering my questions!

I was ten-years-old. Thanks to my Mum’s endless patience, I went from being the kid who couldn’t spell to the girl who had her essays read out in class. One week, I was the butt of the jokes, the next I was writing stories that even made the teacher laugh. Happy days.

Almost forty years later, after a career penning commercials for clients like Chanel and Absolut, I decided to write a book about it, my first novel, I am Ella. Buy me.

Like Ella, I was a girl in a man’s world in Soho’s sexist, sexy Adland in the 80s. Collaborating with some of the sharpest minds in the business, it was my job to come up with adverts for everything from perfume to pet food.

It was an amazingly creative environment, giving us free rein. When someone came up with the idea of a talking dog for one client, it was my job to write the scripts and figure out what a dog might say. Before I could ask an obliging pup, my Creative Director assured me a dog had the same vocabulary as a four-year-old child. So now you know!

Suspending disbelief was a daily occurrence. Luckily, you don’t have to be a fan of advertising to like Ella. She’s real – funny, sad, slightly flawed but always true to her values. Adland may have been the inspiration but the book is all about people, their lives, loves and screw-ups. I wanted to make people laugh, just like I did when I was a kid.

Conveying a different time with wildly differing values from now in a way people who weren’t even born in the 80s can relate to. I’m happy to say, my eighteen-year-old students get Ella and having read what she went through at the hands of her sleazy boss, Peter can see just how far women have come in the workplace.

Back in the 80s, the world was populated with men like Peter. I’m glad I met them. They’re a great source of comedy gold.

I wanted to publish I am Ella. Buy me, which I did in July. I was also desperate to finish my second novel, psychological thriller: The Killing of Mummy’s Boy. It hit the bookshelves in September. I felt compelled to write it after being trapped with a self-confessed killer, on a train for almost two hours. I was terrified, horrified and disgusted but never bored. What better start for a novel?

Set against a backdrop of lies, it’s about unconventional love and possibility of redemption. My friend has banned his wife from reading it on the grounds it is ‘too terrifying’. You’ve been warned!

My third novel Guilt, another psychological thriller, will be out soon.

It’s about seven-year-old Susan who is alone with her younger brother when he dies of an overdose. The guilt she feels informs the rest of her life. When it threatens to destroy not only her but also her family, she sets out to discover the truth. The consequences are as magical as they are tragic.

Guilt is a powerful emotion often playing on innocent minds.

My next novel will be another chick lit. After going to a dark place with the thrillers, I need a laugh.

Thank you for a great interview and inviting me to stop-over. It’s been brilliant. 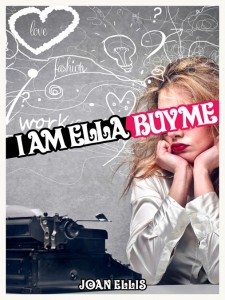 I AM ELLA. BUY ME

Working in Soho’s mad, bad Adland in the sexist 80s, Ella is a rare beast – a woman in a man’s world, dodging her sleazy boss, Peter.

Based on Joan’s experiences in Soho’s mad, bad Adland, this fast-paced, funny tale is set against a backdrop of Thatcher’s Britain when money trumps morals
and lust is a must. Thankfully, Ella knows love is more powerful but can two unlikely friendships help her go from a girl in the firing line to a woman calling the shots? 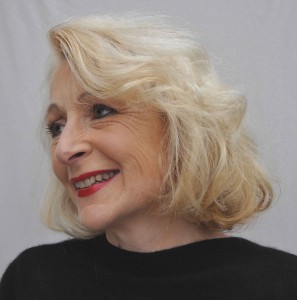 Joan Ellis
Award-winning advertising copywriter, comedy writer, performer, lecturer – Joan Ellis has been them all. With a full-time job in a top London advertising agency and a new baby, she did what any right-minded woman would’ve done and set up a comedy club. She even appeared on the same bill as Jo Brand. Once.

A career highlight was casting a black and white moggie as Humphrey Bogart for her award-winning cat food commercial. Other great performers who brought her words to life include Penelope Keith and Harry Enfield.

As a lecturer, Joan taught comedian Noel Fielding all he knows about advertising before encouraging him to showcase his talents on a wider stage.

Working for The Press Association, she tutored Wordsworth’s great-grandson in the art of copywriting: Buy a host of golden daffodils and get a blue one, free!
She was a lecturer in PR and Advertising at Bournemouth University.

She penned a regular column about her daughter for parenting glossy, Junior. Sophie is now eighteen and refuses to read a word her mother writes.

Suffering from swine flu and sweating like a pig, she moved from London to her beloved Isle of Wight where she writes and eats cream teas with her long-suffering husband, daughter and cat.

She recently launched her books at The Ventnor Fringe and the Isle of Wight Literary Festival.

You can win a .pdf copy of the book during the tour!