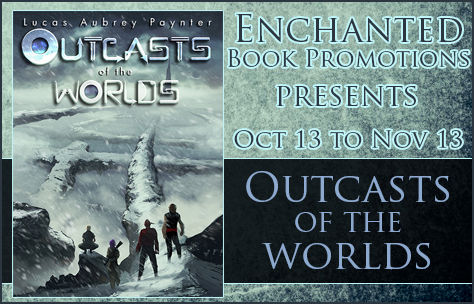 I knew I wanted to write for a living when I was in high school, and I started defining myself as a writer around that time. Even before then, I wanted to do animation and comic books and for a while after that, video games, so the want to work in creative media is something that’s always been in me. I’ve never thought of myself as an author exclusively, and while it’s come with its own challenges, I’ve also found a share of creative freedom in it, and I’d be happy to make my living on it for years to come.

That’s a layer question, and it ranges from Japanese Role Playing Games to Buffy the Vampire Slayer and a number of smaller things in between. Somewhere early on, it stemmed from a want to write epic fantasy adventures where the fate of the world(s!) was at stake and, in the beginning, that’s all Outcasts of the Worlds was. I wanted big set pieces and expansive heroic casts of characters and I outlined this story for years that started out as heroic fluff but became something that I wanted to inject more and more meaning in as time went on.

Eventually, I redrafted it from scratch and tried to figure out what elements worked and what didn’t, and what would make it a more compelling piece. I pared down the cast a bit, rearranged who met who in ways that would better compliment the plot and found the protagonist Flynn in a darker place, but one that gave him a stronger point to try and climb out of. This re-draft is not Outcasts itself (there are still a number of differences), but it’s the one that most influenced the final product.

Seemingly ceaseless. I do a fair bit of editing as I write, sometimes falling back to earlier scenes that didn’t sit well or reviewing recent material to get back on my groove. If I had to take a few weeks or more away, I’ll re-read everything I’ve written to see if it’s working. Sometimes I dash away whole passages, though I may keep one or two bits that I liked and try to reinsert them into the revised material.

When I finished writing Outcasts in August 2013, I began re-reading it from the beginning that same night, and didn’t consider it “done” until two weeks later. Once my editor went through it the following year (I tried shopping it around to agents, but most who gave more than a cursory rejection said it was too long for an unproven author), I must have gone through it again six more times. It became tedious and nerve-wracking, as I wanted to be done but would find one or two small errors from time to time–some of them I accidentally made myself in revision!

Finding the narrator’s voice. The prologue and first chapter were a mess for the longest time, because I redrafted that part more than any other piece of the book. The events presented are almost (almost!) entirely the same from day 1, but I continuously re-defined the speaking voice between past and present (well, present tense didn’t last long), order of events and just what details to inject and remove.

A major symptom of this information injection was trying to decide how often I had to restate or reiterate pieces of key information from the early story that would define the later parts. My editor left a frustrated note in the margins concerning the fate of a character in the early chapters that I had been bringing up in more detail than was needed.

Likewise, with the narrating voice, I also had to get comfortable describing oddities about the characters that had become second nature to me. I worried continuously early on that major character traits would come off as tacky and hurt the perception of the work if they weren’t described just right.

5. What were your writing goals for 2014, and did you accomplish them?

Half my writing goals were this book, and just getting it out there. As it’s the first piece I’ve formally published, it was a huge undertaking and a learning experience and I’m grateful to all the people I’ve had to work with and help shape it up.

Of course, I’d have liked to be further along with my next book, but proofreading took a great deal more time than I expected. But it’s underway. Speaking of…

I’m working on the second book of the saga that Outcasts of the Worlds began: Killers, Traitors and Runaways. I don’t want to give too much away since it would involve details on how the first book ends, but suffice to say it picks up a few weeks later, with the Outcasts of Book 1 both having found new direction and simultaneously being more lost than they’ve ever been. 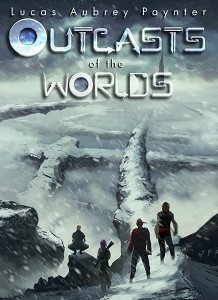 Title: Outcasts of the Worlds

Beyond the remnants of Earth lie many worlds, connected by pathways forgotten and invisible. They were left by the gods and have been found by Flynn.

A confidence man. A liar. A monster. Flynn has seen himself for what he really is and has resolved to pay for everything. Even if it means spending the rest of his days locked in Civilis, a tower prison for society’s unwanted – “half-humans” gifted by the fallout of nuclear holocaust centuries past.

Jean, a prisoner in the neighboring cell, has different ideas and despite himself, Flynn finds himself joining her daring escape. After rescuing her friend Mack, the three flee Civilis as Flynn pieces together the hours before his capture and finds himself drawn to an abandoned facility where a rift to another world opens at his nearing.

Together they will venture farther beyond the stars than humanity ever imagined, find others like them that will never belong, and tangle with forces both ancient and immortal. They stand alone, hated and scorned – and the last hope of making things right in a cosmos gone terribly wrong. 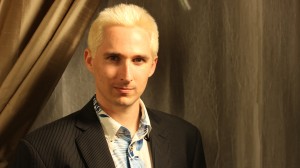 Lucas Aubrey Paynter holds a Creative Writing degree from California State University Northridge—which looks really good when one talks about how they want to write for a living. A fan of engaging storytelling in any medium,  he spent years developing the worlds, characters and conflicts that Flynn and his company encounter, before settling at his desk and writing Outcasts of the Worlds, the first part of a much larger tale to come.

Currently residing with his wife in Burbank, California, Lucas enjoys reading in a variety of formats, potentially overanalyzing character motivations and arcs, and the occasional good, stiff drink.