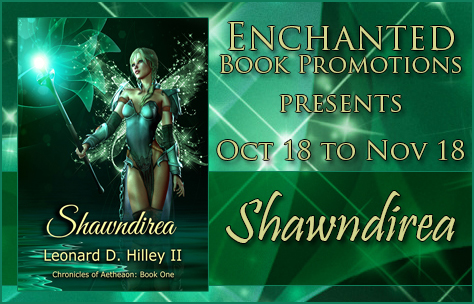 I’m interviewing Leonard D. Hilley II today, author of fantasy novel “Shawndirea”. Welcome to my blog, and thanks for answering my questions.

I knew at an early age. I loved books and learned to read at the age of three. I had stacks of Dr. Seuss and Early Reader books when I was a child. In first grade, my teacher had a closet of old grade school literature books. She let me take a different one home each day until I had read all of them. By fourth grade I had read every book in the grade school section of the library and the librarian allowed me to read fiction from the high school section of the library.

In the fourth grade I wrote my first novel (age 11), which was the original novel for Devils Den. I wanted to write stories about characters and places I couldn’t find in other books. I also grew up during a time where technology was at a minimum. We didn’t have cable, computers, or the Internet, so my sister and I spent our time using our imaginations in our little fantasy worlds. Otherwise, there wasn’t anything else to do. I’m thankful that my childhood was back then. I dare to say that the lack of those tools allowed my imagination to blossom.

2. Where did you get the inspiration for Shawndirea?

Shawndirea is a character in Devils Den. She’s a faery and also the Butterfly Queen in her realm, which means that when the butterflies’ wings are worn and tattered, they come to her for her blessings. She adorns them with new wings. The twist for the novel is when she is mistakenly captured and injured by an entomologist that has thousands of mounted butterflies and moths in his collection. She teaches him the importance of nature and its species in a way he never imagined before. Their interactions set the stage for the novel and many unplanned surprises emerged along their journey, too.

I typically go through each page dozens of times. Generally, I back up three pages from the day before and reread them. This gives me a chance to catch some errors while refreshing my mind of the story and character interaction, and then I find myself ready to move on.

And thank goodness for Beta Readers! I have six great readers that proofread and provide feedback throughout the process. It’s great having extra sets of eyes, but even with all of that, a few mistakes slip by.

Finding adequate long periods of time to write was difficult, but it’s amazing how a page here or two-to-three there add up so quickly. My college advisor told me after I finished my MFA in creative writing that “a writer will find time to write, no matter what.” He was right. I took that statement to heart and made time to write each day.

One goal was to finish Shawndirea, which I did earlier in the year. I am hoping to finish my sci-fi novel by the end of 2014, and it’s coming along quite well.

The sci-fi novel I’m working on begins on the Deimos Moonbase. Dr. Frank Carter is the sole survivor after miners uncover a hidden virus that wipes out the settlement. Since Carter is immune to the virus, he vows to avenge the deaths of his colleagues and fiancé by taking the virus back to Earth to kill the founder of the Olympus Mons Mining Base and Deimos Life Station. His thirst for vengeance blinds him to the fact that he might also kill millions of people on Earth. 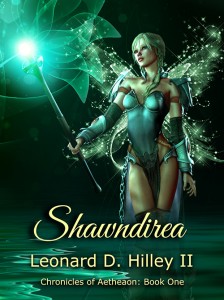 Often the smallest unexpected surprises garner the most demanding dilemmas, which proves to be the ordeal that entomologist Ben Whytten faces. While netting butterflies to add to his vast collection, he mistakenly sweeps what he thinks is the most spectacular butterfly he has ever seen into his net. Upon examining his catch, Ben is horrified to discover he has captured a faery and shredded her delicate wings into useless ribbons.

Devastated, Ben vows to take Shawndirea back to her realm, Aetheaon; but he discovers that doing so places their lives into immediate danger. To get to Aetheaon, they must pass through a portal rift deep inside the haunted cavern, Devils Den.

Once they cross the rift, Ben enters a world where mysteries, magic, betrayal, and power struggles await. He must adapt quickly or die because Aetheaon is filled with enchanted creatures and numerous races where chaos often dominates order. And since Shawndirea’s destined for the throne of Elvendale, opposing dark forces plot to prevent her from ever reaching her kingdom again. The faery’s magic isn’t enough to fully protect them, so he must trust other adventurers to aid them during their journey.

Leonard D. Hilley II currently lives in the mountains of Kentucky with his wife, Christal, and their two children.  He is the author of The Darkness Series–Predators of Darkness: Aftermath, Beyond the Darkness, The Game of Pawns, and Death’s Valley.

Shawndirea is available via Kindle Unlimited as well.