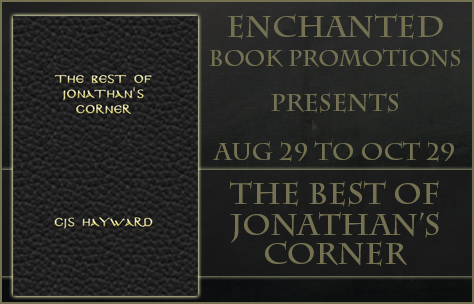 I’m hosting an interview today with Christos Jonathan Seth Hayward, author of creative non-fiction / religion / spirituality “The Best of Jonathan’s Corner”. I hope you enjoy the interview, and thanks to the author for responding to the questions.

​ I don’t remember exactly; from a young age my desire was more to be a speaker than an author. But I remember in college, when I visited Malaysia, saying that I was going to write a book.

The inspiration for the various pieces that make up The Best of Jonathan’s Corner​ snuck up on me to some extent; I wasn’t looking for it when it found me.

In recent years, I have looked for inspiration in different places; when I was younger, inspiration found me, and much of it came in response to youthful energies. The Best of Jonathan’s Corner is a collection of my best works of theology, and its inspiration largely caught me unawares.

My editing process is largely in my heart; for most of these works, the inspiration and the process of editing were one thing, and writing it down came as a very last step, when things were grown to full stature. I haven’t done much editing on paper.​

The pieces included in it both include my biggest struggles to create something and something that was not difficult at all. The process involves intense work but it is overall a very light burden to bear.

​ Right now, to fulfill all the writing needed for my blog tours. I’m spread a little thin, ​but there are one or two pieces I’d like to get down.

​I was able to say something for humility and repentance, first in A Pet Owner’s Rules, ​and then picked up some of the same thread in Repentance, Heaven’s Best-Kept Secret, both included in The Best of Jonathan’s Corner. I would like to do something for the indescribable Providence of God. 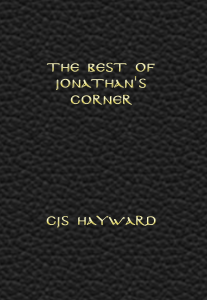 Title: The Best of Jonathan’s Corner

The Best of Jonathan’s Corner, newly expanded ​ after getting five star reviews​, is a collection of varied works of Eastern Orthodox mystical theology. It spans many topics and many different genres of writing, but it keeps coming back to the biggest questions of all. It is inexhaustible: the works are independent, and you can read a few, many, or all of them to suit your taste. Fans of CS Lewis and GK Chesterton will love it. 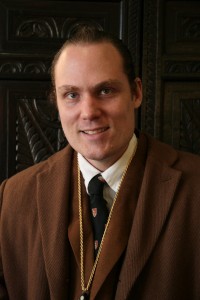 Some have asked, “If a much lesser C.S. Lewis were Orthodox, what would he be like?” And the answer may well be, “C.J.S. Hayward.”

Hayward has lived in the U.S., Malaysia, England, and France, and holds master’s degrees bridging math and computers (UIUC), and philosophy and theology (Cambridge).