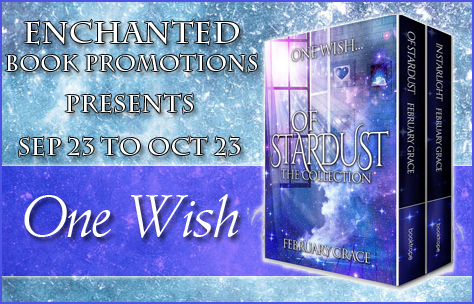 I’m interviewing February Grace, author of fantasy romance “One Wish”. Thanks for answering my questions, February!

1. When did you know you wanted to be an author?
A: I knew I wanted to write from a very early age; but as far as becoming a published author, I really didn’t aspire to that until after I went blind, then was lucky enough to regain some of my eyesight through six surgeries. I don’t know what it was, but after going through all that there was just this desire to share my work with others as much as I could that I hadn’t had before. As an extreme introvert I was happy writing and either only showing it to a few friends or just keeping it to myself. Something changed, though, and I wanted to connect with people through my words. So I guess I’d say that things changed for me around 2008, and I started to think about wishing I could be published.

2. Where did you get the inspiration for The One Wish Collection?

A: I wanted to genre hop after my first book (which was romance with steampunk elements) into fantasy/romance and I knew I wanted to do something fairy tale related, but I didn’t know what. Then I was half asleep and the question came to my mind, “How do Fairy Godmothers get certified?” Then the next question, “What about Fairy Godfathers?” After that, it just took off from there.

A: I have to print the first draft out on paper and do the first round of edits there. Then I let the book rest for a little while. Then I reread it, usually while having a reader program read it out loud to me at the same time. I catch a lot of repetitive word usage and overused phrases that way. I clean it up, repeat the process until I’m satisfied, and then it either gets submitted to an editor for them to go over or, as if in the case of some of my work, I’m doing my own editing, I just keep going through draft after draft until I have polished it to as shiny and beautiful as I can without making it all sound mechanical.

I find editing uses a different part of my brain than writing fresh content does…in a way it’s easier. You can see what fits and what doesn’t…like putting together a puzzle. Then if I need to, I will physically rip pages apart and tape them back together in the right sequence to reorder scenes, then take it all back to the computer and slowly put it in as my eyesight allows. It’s a process, let me tell you! But so worth it.

A: I’d have to say the most challenging part was writing book two in the set, IN STARLIGHT. Because so many readers had asked me for a sequel, and I knew that no matter how I ended the story that it wouldn’t please them all. I’ve been fortunate though, I have received a lot of positive feedback about the way I wrapped it up…except people keep asking for another book LOL. I keep telling them that I want to leave the rest up to their imagination but they keep asking! I guess that’s a good thing, though 🙂

A: To finish the manuscript I started in July that has been waiting patiently for me to return to it. I hope to begin major revisions right after this blog tour ends.

A: I can’t tell too much without giving a lot away, so I will only be able to tell you that it is also a fantasy romance. There are, however, no Fairy Godparents in it. It’s a book meant to stand alone, on its own. Hopefully, when I am finished with it, it will. 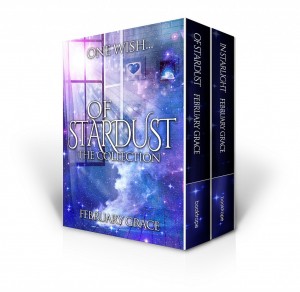 Title: One Wish – The Of Stardust Collection

Till Nesbitt had no idea what she was getting into when she learned the truth about her future from her Great Aunt Tilda: that she was destined to become a Fairy Godmother, because the skills were written into her DNA.

Faced with a whole new world of rules to navigate and a heart full of confusion, will Till be able to live for her work, or will her partnership with sweet, handsome Gus Duncan lead to her downfall? 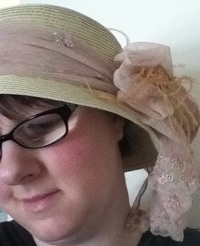 February Grace is a writer, artist and poet who lives somewhere that is much colder than she would like most of the time.

She sings on key, plays by ear, and is more than mildly obsessed with music, clocks, colors, and meteor showers.

Her poetry, prose, and/or flash fiction have appeared in The Rusty Nail Literary Magazine, Vine Leaves Literary Journal, and Rose and Thorn Journal. Her work can also be found in the following anthologies: Poetry Pact Volume One, Anything Prose…And Poetry, Too! and Orange Karen, Tribute To A Warrior.

GODSPEED, her debut novel, is a labor of love she refers to as “Literary romance with steampunk embellishments.”

Her second novel, OF STARDUST, is a modern, romantic fantasy tale. IN STARLIGHT is its sequel.