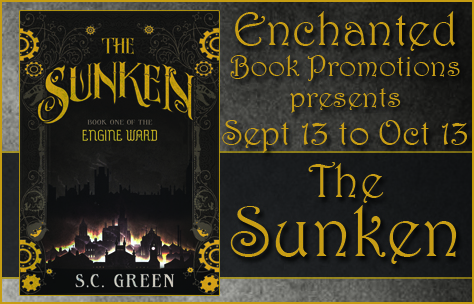 I’m interviewing Steff Green, the author of steampunk dark fantasy “The Sunken”. Thank you for taking the time to answer to my questions, Steff! I enjoyed reading through your responses.

1. When did you know you wanted to be an author?
Ever since I was a child, I’m not sure exactly what age. I was always making up stories and writing and drawing. I remember one of the longer stories I ever finished. It was about my cat, Benji. He was a detective, solving crimes in the cat world for the Alleyway Cat Detective Agency. I wrote three books in the series, with lots of ideas for more. I imagined a whole franchise, with books and movies and soft toys and a TV cartoon and everything.
2. Where did you get the inspiration for The Sunken?
My husband and I were traveling around Europe with two amazing friend. My husband had just got into steam trains in a big way and so we were visiting a lot of vintage railroads. I got really fascinated with the big engines and how they worked and how they shaped the world, and I started thinking about the people who invented them and what their lives might’ve been like if they lived in a different world. I started reading about Brunel and Stephenson and “The Gauge War” and I started thinking how neat it would be if the Gauge War was a REAL war, and the whole concept kind of arose from there.
3. What is your editing process like?
I write very rough drafts, and then edit them and re-edit them down to something tight. For me, the magic happens in editing. That’s when I really get inside the character’s head and the story comes to life. It’s where I add all the detail I missed in the main draft.
4. What was the most challenging part of writing this book?
Probably the historical research. I wanted to create an alternate world that felt real, and that meant researching many facets of Georgian life, from readings books about how London as a city functioned and how inventions shaped the industrial age, to volunteering at a heritage steam railway and learning the HARD way who locomotives actually work!
5. What are your writing goals for the rest of 2014?
I want to finish the second book in the Engine Ward series. (It’s called The Gauge War). I’ve got about 18000 words to go now. I’ve also got a couple of short stories for another pen name to finish, and I’m planning on doing NaNoWriMo with a couple of friends – hoping to get the first draft of a new dystopian series finished. My husband and I are also building a house at the same time, so that takes up a lot of energy right now.
6. Are you working on something now? If so, can you tell us a little about it?
Currently, I’m working on two projects; The Gauge War – the second in the Engine Ward series. I’ pretty excited about this! And a dystopian series set in a near-future city where oil has become so scare that people have reverted to using horses for all their transportation and freight needs. The main character is a cop who busts illegal hay growing operations and has a very dark past. I love writing characters like him – he’s a kind person who has been hardened by the things he’s seen and his horrible personal life, he’s very strong and very vulnerable at the same time. 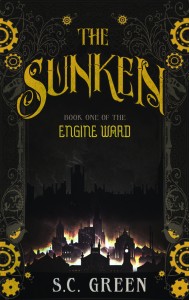 In the heart of London lies the Engine Ward, a district forged in coal and steam, where the great Engineering Sects vie for ultimate control of the country. For many, the Ward is a forbidding, desolate place, but for Nicholas Thorne, the Ward is a refuge. He has returned to London under a cloud of shadow to work for his childhood friend, the engineer Isambard Kingdom Brunel.

Deep in the Ward’s bowels, Nicholas can finally escape his strange affliction – the thoughts of animals that crowd his head. But seeing Brunel interact with his mechanical creations, Nicholas is increasingly concerned that his friend may be succumbing to the allure of his growing power. That power isn’t easily cast aside, and the people of London need Brunel to protect the streets from the prehistoric monsters that roam the city.

King George III has approved Brunel’s ambitious plan to erect a Wall that would shut out the swamp dragons and protect the city. But in secret, the King cultivates an army of Sunken: men twisted into flesh-eating monsters by a thirst for blood and lead. Only Nicholas and Brunel suspect that something is wrong, that the Wall might play into a more sinister purpose–to keep the people of London trapped inside. 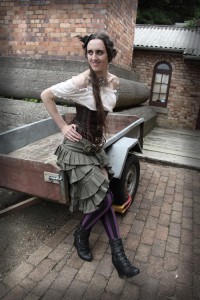 Steff lives in an off-grid house on a slice of rural paradise near Auckland, New Zealand, with her cantankerous drummer husband, their two cats, and their medieval sword collection. The first CD she ever brought was Metallica’s ‘Ride the Lightning’, and she’s been a card-carrying member of the black-t-shirt brigade ever since.

Steff writes about metal music, her books, living off-grid, and her adventures with home-brewing on her blog www.steffmetal.com. She writes humorous fantasy under the name Steff Metal, and dark, dystopian fantasy under S. C. Green. Her latest novel, The Sunken, explores an alternative Georgian London where dinosaurs still survive.

Stay up to date with Steff’s books by signing up to her newsletter at http://steffmetal.com/subscribe, or like her Facebook page at http://facebook.com/steffmetal.