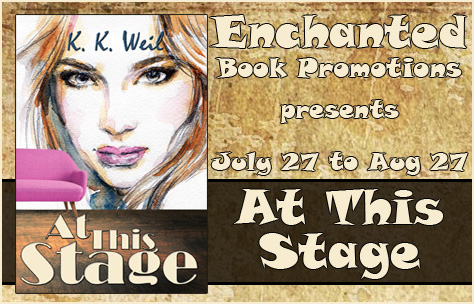 I’m interviewing K.K. Weil today, author of YA / NA crossover “At This Stage”. Enjoy the interview.

I’ve always loved to write and have been creating stories in some form or other since I was a kid. So being an author was always something I wanted to do, even when life took me on other paths. This past year was the first time I had the opportunity to write a novel from beginning to end, and the process was wonderful.

2. Where did you get the inspiration for At This Stage?

I’m usually inspired by conversations I have with people. Thought-provoking questions without any right or wrong answers have always interested me. The topic of conversation one day was impossible relationships. Long after the conversation was over, I found myself wondering what would happen if two people were thrust into a situation where it was inappropriate for them to be together. And could something happen over time that would change their circumstance and make the relationship okay after all? Thus, the inspiration for At This Stage.

After I finished my first draft of the book, I knew it was much too long and had to be cut. I needed to make sure the book didn’t get bogged down with too many details. I tend to like things to be very accurate, but what I learned through editing it was that excessive details slowed down my story. When I started cutting from the first draft, I was nervous I’d be taking away from the story. But it actually made it much tighter and a smoother read.

It was definitely the development of Jackson’s brother, Danny. I wanted to make sure I depicted him the way I imagined him. Warm, loving, and as Jackson says, “awesome”. I also wanted to show how Jackson’s devotion to his brother influenced Jackson’s decisions. It was part of why he took Kaitlyn in to begin with and a big part of his writing. I even felt like Jackson was sort of testing Kaitlyn to see how she reacted to Danny. Luckily, she passed with flying colors.

Before the end of the year, I’d like to have the book I’m working on now finished and have a good idea of where my next book will go.

Griffin is a character I didn’t initially intend to be in the book. The more I wrote about him, though, the more I connected with him. I became very curious about what made him tick. So now I’m writing Griffin’s story. Knowing his back story, about his family, what got him into sculpting to begin with and why he’s so brooding, makes me love him even more. I’m also working on a young adult novel that is not connected to At This Stage, which is centered around family dynamics. 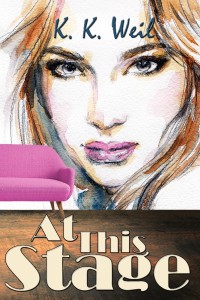 Title: At This Stage

The attractive man sleeping on her couch was never like a father to her. That would’ve been much easier…

Outspoken seventeen-year-old Kaitlyn Fowler loses her mother, gets taken in by a gorgeous family friend, and discovers her mysterious biological father has always known she existed. All within a few months.

At twenty-three, Jackson Wall lives without a single obligation. That is, until the daughter of his late public relations manager and dear friend is threatened with foster care. Shocking even himself, the rising playwright volunteers to become her guardian. Eloquent and incredibly talented, Kaitlyn comes to mean more to Jackson than he ever imagined. Or wanted.

Jackson struggles with their friendship as it develops into something much more complex. While Kaitlyn can’t deny her feelings, she knows what will happen if she pushes him too far. As they search for Kaitlyn’s unknown father, she wonders if Jackson will reject her, too, or if she can convince him that something wrong to begin with can become right over time. 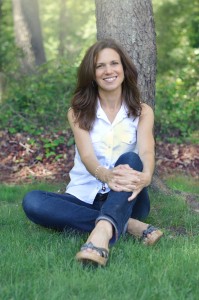 K.K. Weil grew up in Queens, a subway ride from New York’s theater district, which had her hooked early on a mix of major musicals and low-budget one-man shows. Weil, a graduate of N.Y.U. and former teacher, now enjoys writing her own dramas. She lives near the beach in New Jersey, where she is at work on her second novel.