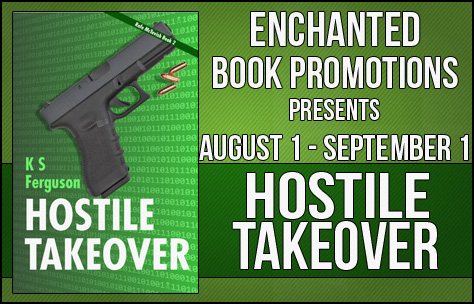 I’m interviewing K.S. Ferguson, author of mystery / thriller “Hostile Takeover”. I hope you enjoy the interview, and thanks to the author for taking the time to respond to my questions.

I started writing stories around the age of nine. I loved reading, and I thought it would be great to make up my own books. Unfortunately, I didn’t know how to spell half the words I wanted to use and couldn’t find them in the dictionary. I drove my family crazy asking how to spell things. Then I got involved in other things, and writing went on the back burner for years and years.


2. Where did you get the inspiration for Hostile Takeover?

Hostile Takeover is the second in the Rafe and Kama series. It continues the story started in Calculated Risk. I’ve spent 15 years working in corporate America, and I felt like I had things to say about that environment. I also enjoy futuristic settings and asking “What if…?” But I wanted the focus to be on the people and not on the technology. I wanted to know how the events in their lives force them to face their fears and change.

I work from an outline, so I know what I should write. I start each day by reading what I wrote last and editing that. It helps me get back in the swing of things to write forward. I’m not the type to rush forward and write a complete first draft before going back over the work. If I feel like the story has gone off the rails, I have to stop and figure out why. I won’t hand off to beta readers unless I know I’ve done everything I can to give them the best and cleanest manuscript I’m capable of. If I know I have problems that need fixes, and I know how to fix them, it seems a huge waste of my beta readers’ time to have them read mistakes. I need their help to find the things I overlooked or don’t know how to fix. Once I have their feedback, I do a final rewrite. Then it’s off to copyedit.

Writing Hostile Takeover was like pulling teeth. I want my characters to change in every book, even if they are series characters. Finding the right change was extremely difficult this time out. Possibly that’s because I know where I want them to be at the end of the third book and kept trying to get them there at the end of this book.

I’m releasing my fourth book, No Place Like Hell, by the end of August, and I hope to complete a fifth, Undercover Madness, by the end of 2014. I’d also like to grind away on the marketing to the point where I’m making some steady sales, but I know it takes a lot of time and effort to find an audience in the current market.

I’ve just finished No Place Like Hell, the first in a supernatural PI series set in 1968. Nicky Demasi, the first female patrol officer on the Solaris, California police force discovers the victim of a ritual murder. The hippie she finds standing over the body is actually the hellhound, clothed in flesh. He’s been sent to retrieve a damned soul that escaped from Hell, and he won’t let anything stand in his way—including Nicky. Nicky’s determined to take him down.

I’m currently writing Undercover Madness, the sequel to Touching Madness. Hapless schizophrenic River Madden, a man with an uncontrolled talent for fracturing dimensional barriers, has been recruited to join Dimensional Protective Service. River’s anxious to prove himself. When a scientist is lost while traveling between dimensions, River attempts a rescue. But the scientist is dead. The Neanderthals claim a demon murdered him. The FBI and CIA blame a Chinese mole bent on stealing the secret of dimensional travel. The light bulbs aren’t talking—but they’re still serenading River off-key. River must unravel a web of lies and spies to find the killer before the demons destroy the human and Neanderthal dimensions. 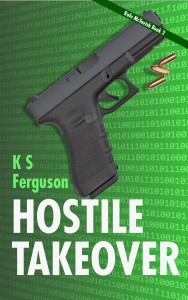 Rafe McTavish, security expert and new CEO at interplanetary mega-corp EcoMech, and his undercover ally Kama Bhatia, hacker and corporate spy, continue their pursuit of a ruthless blackmailer in the sequel to Calculated Risk.

When Rafe’s arrival on EcoMech’s frontier colony world ruins their adversary’s plan for supremacy, events take a deadly turn. As tensions amongst the workers rise and unrest turns to violence, Rafe and Kama must race to unmask a killer before Rafe and his family fall victims to a murderous hostile takeover.

You can win a set of print copies of the entire series.