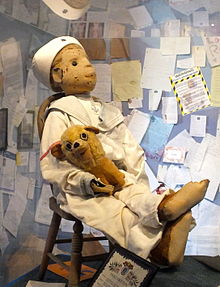 If you thought Annabelle was scary, wait until you read about Robert the Doll. The name might sound innocent enough, but this doll brings scary to a whole new level.

It was the late 1800s when the Ottos moved into a mansion in Key West, Florida. The house is now known as “The Artist House”. The story begins when Mrs. Otto fired a servant after she witnessed her practicing black magic. The woman – probably not too pleased with being fired – gave Robert, the young son of the Otto’s, a doll as a departure gift. The doll was three feet tall, had buttons for eyes, and was filled with straw. Some claimed he had human hair (Robert’s) but that was never proved.

Either way, despite it being obvious that you shouldn’t let your kid keep the doll he was given by a creepy, black-magic practising servant, Robert got to keep the doll anyway. And because he was a little creepy himself, he called the doll “Robert”, his own name. Shortly after, he insisted he be called “Gene”, his middle name, since apparently “Robert” was the doll’s name. He also dressed the doll in his clothes, took him to bed, even fed him food…whatever happened to that food, we’ll probably never know.

Now, that already ranks highly on my scale of scary, but it got worse. Objects started moving across rooms. Disembodied voices resonated through the house. Gene always insisted Robert was the one to blame. Fed up, his parents placed Robert in a box on the attic, and that was that.

Except that, after his parents died, Gene and his wife moved into the house, and Gene, inspired by what can only be called stupidity, went up to the attic and retrieved the haunted doll. He installed the doll back in the Turret room, began having conversations with it, and eventually drove himself, and his wife, mad. Whether it was from seeing her grown-up husband communicate with a doll, or from the doll moving to random places around the house, we’ll never know.

Robert is now stationed in the East Martello Museum in Key West. He wears a sailor suit and clutches a stuffed lion – as if that could make him look any less creepy. If you’re in the KEy West area, you should definitely drop by for a visit. Just make sure you don’t get cursed.