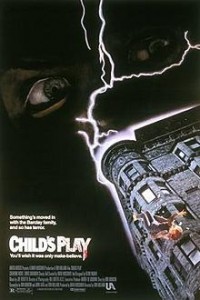 I’m a huge horror movie fan. I tend to freak out whenever something disgusting comes on screen, or whenever the music picks up and I know something is about to happen, but that doesn’t mean I don’t love scary movies. I’ve watched more horror movies than any other genre. Some horror movies rely heavily on blood and gore for the scary part, others use atmosphere and setting to up the creepy factor. I’m no so big on the first category, but atmospheric horror is always a must-watch for me.

When I wrote “The Doll Maker”, I decided to rewatch (or watch for the first time) a bunch of horror movies that featured dolls. Here’s my top five.

For some reason, the dolls in Dead Silence scare me more than any other doll I’ve ever seen on screen. This movie was actually quite chilling to watch. It starts out with an urban legend of a sleepy town named Raven’s Fair where a woman named Mary Shaw, a ventriloquist, was accused of kidnapping a young boy, murdered by an angry mob, and buried alongside her collection of dolls. But ever since, the town has been disturbed by some mysterious deaths, and some claim Mary is responsible.

This movie doesn’t have a high rating from the general crowd, but I enjoyed it. It was atmospheric, scary, and those dolls were eerie. Almost guaranteed you won’t sleep all night after watching this one.

If the name Chucky doesn’t ring a bell, then you’re probably not a horror fan. Child’s Play is actually the name of the movie featuring homicidal, disturbed, psychopathic doll Chucky.

I don’t think this movie needs any more introduction.

Asylum is a rare gem – one of the few horror movies that kept me up for more than one night in a row. It’s also not that well-known to the general public, so I thought it deserved a mention here.

The plot is rather original – through an interviewee applying for a job at the aslyum, we get to know several stories of the inmates. One story, “Mannikins of Horror” talks about a creepy doll, and when I say creepy, I mean hiding behind the couch creepy.

This is a strong movie, with great plot, characters, settings and atmosphere. If you’re looking for a somewhat more obscure horror movie, this one is an excellent choice.

Poltergeist hits number four because the doll makes only a short appearance here – and the doll is, in fact, a clown. And just about the scariest thing in the entire Poltergeist movie. He doesn’t get a lot of screen time, granted, but he’s still the suff of nigthmares.

If you want a movie featuring a terrifying doll, and you don’t mind taking over-the-roof scenes (like, the entire house vanishing into a graveyard) and some silly dialogue, give this classic a shot.

The Conjuring tells the story of a family who moves into a haunted house. Soon after they move in, creepy stuff starts to happen, a demon targets them, and the family enlists the help of famous paranormal researchers Lorraine and Ed Warren to help them get rid of the demon troubling them.

The movie is heavy on dramatics. It’s not that atmospheric, and instead of building up to the scary parts, it just throws the viewer right in. Overall, I liked the story though and how it tied real events to fiction. The acting wasn’t stellar, but it wasn’t horrible either.

One of the minor characters in the movie is Annabelle, a haunted doll who the Warrens rescued from a case, and put in their own private museum. In the movie, the doll unfortunately looks nothing like the original. Read my article if you want to find out more about the real Annabelle.