The Island of Dolls: A Nightmare Come True 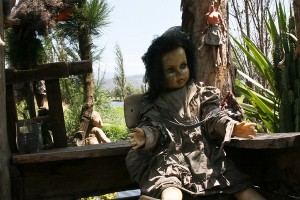 Dolls can be scary. They have beady eyes that follow your every move. Sometimes they’ve switched poses when you return to a room. Or they just have creepy scare, and they’re plastic or porcelain yet they look so human. If you’re scared of dolls, then imagine a whole island filled with them.

The Isla can be found in the Xochimilco area, in Mexico. And it’s creepy. Trust me. 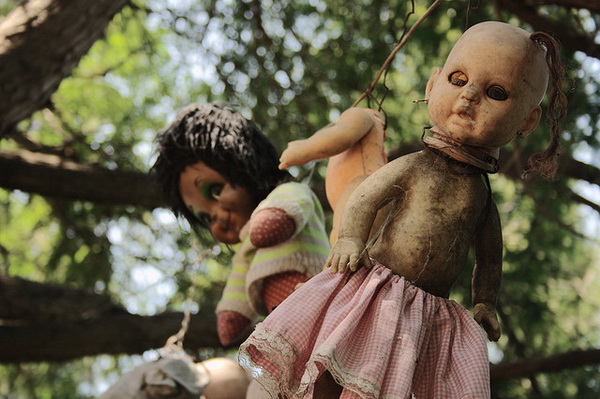 Not only is the island a paradise for fans of dolls, it’s also reported to be haunted. The reason why the dolls are there is in fact a ghost story from the 1950s. A man named Julian Barrera lived in a lonely life in a hut on the island. He witnessed a girl drown, and grew convinced the girl’s spirit was haunting him. He heard disembodied giggles, silly songs, scraping noises from outside his cabin. In short, he experienced all typical signs of a haunting.

Barrara grew afraid, and when he saw a doll drift by in the water one night, he thought that was a sign from the deceased girl. He hung it on a tree on the island, hoping it would appease the spirit. But one doll wasn’t enough. He began hanging more and more dolls all across the island, and the doll-collecting turned into a real obsession.

Now, of course, rumors spread like wildfire about this strange man collecting numerous dolls to appease a spirit girl. Witnesses even claimed that Barrera talked to the dolls and acted like they were actual children.

Are you scared yet?

Well, when Barrera died, they found him floating face down in the same canal the little girl drowned – the girl that supposedly haunted him. Locals say Barrera’s spirit now tied to the island as well.  And, because it’s apparently a fun tourist attraction, no one bothered to take down the dolls. Decades later, they’re still there, and their number has only grown over the years. People who visit the island sometimes bring a doll with them to appease the bad spirits that have infected the island. Others just bring a photo camera, and take dozens of equally-creepy pictures.

The current tenant is Barrera’s cousin, and he has plenty of spooky stories to tell about the dolls, the curse, and all the eerie things that happened on the island so far.

If you haven’t found an interesting holiday location yet, there’s no reason not to add La Isla de las Munecas to your list. Except, you know, how it’s just about one of the creepiest places on earth.