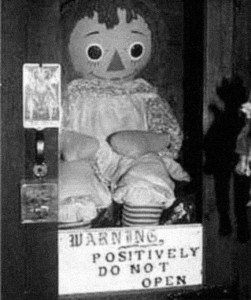 In a series of articles, I’m going to talk about haunted dolls. When I was a kid, I loved playing with dolls. But some dolls…well, they’re just plain creepy. The first doll we’re going to discuss in this series, is Annabelle, who played a small part in the hit horror movie “The Conjuring”, which released in cinemas last year. She also appeared in several documentaries, and can be found in the museum of ghost hunters extraordinaire Ed and Lorraine Warren. Annabelle is so popular she’ll even get her own movie this year, “Annabelle”.

For those of you who’ve seen “The Conjuring”, Annabelle looks nothing like the creepy porcelain doll they used in the movie. The real Annabelle is a Raggedy Ann doll, and doesn’t even look creepy. As the story goes, a woman was browsing through an antique shop, looking for a birthday present for her daughter Donna. The latter brought the doll into the apartment she shared with another student, Angie. Both were studying at nursing school, and about to graduate. Why Donna’s Mom decide to buy her grown-up daughter a doll for her birthday, remains one of the biggest mysterious about this case.

Anyway, as soon as the doll was in the house, trouble started up. Donna would come back home and notice the doll had slightly changed positions. At first, the girls thought they were imagining things, or they looked for logical solutions. But as the doll’s behavior became more erratic, they both grew scared of the doll. Sometimes the doll would even be in a completely different room than where they left her. The girls confided in a male friend of theirs, who the Warrens refer to as “Lou” in their account of the events.

A while later, notes started appearing all around the apartment. Words like “HELP” or “HELP LOU” were written on them, and the handwriting was child-like. On top of that, the notes were written in pencil, but there was not one pencil in the entire apartment. Apparently Annabelle had her own secret pencil stash.

Like that wasn’t enough evidence, the girls started laying traps around their house, but the doll didn’t fall for any of that.  Even though it still moved around, it carefully avoided the girls’ traps. However, instead of kicking the doll out like any sane person would do if their doll suddenly start moving on its own, they waited until the doll stated oozing blood from its hand and chest until they got truly alarmed.

Instead of tossing the doll out, they decided the bleeding-incident was sufficient to call upon a medium, who promptly visited and decided to make things even worse. According to the medium, the doll was possessed by the spirit of a girl named Annabelle Higgins. She was a seven-year-old girl who died on the property long before it was build. Annabelle’s spirit had connected to the doll when they brought her into the apartment. Then the medium continued to ask the girls if Annabelle could stay with them, and permanently move into the doll.

Bad move. This is the moment in any horror movie where any self-respecting protagonist should say “no” and get the heck out of there, but for some reason, never does. As you can guess, things went from bad to worse, to nightmare.

Annabelle attacked Lou, the male friend mentioned above. To her credit, he had been the one to nag to the girls to do the only sane thing and get rid of the doll, so maybe she was out for revenge, or to shut him up so her hostesses wouldn’t kick her out. Either way, she crawled up on him one night and tried to strangle him. How’s that for a child spirit? But while this encounter couldn’t be proven – he might just have had a vivid nightmare – he did get attacked for real the other day, and was bleeding when Donna found him. Seven slices were on his chest, four horizontal and three vertical. No photographs are taken though, because hey, the word of the Warrens is enough, right? Oh, and aforementioned marks disappeared without forty-eight hours.

Then the Warrens entered the stage, and they concluded the doll wasn’t possessed by any child spirit, but by a demon. Yikes. Oh, and on top of that, the doll itself was not just possessed, but served as a conduit between earth and hell. An exorcism ensued. Afterward, the Warrens kindly offered to take the doll with them into what turned to be the craziest car ride of their lives, as the doll did everything it could with its demonic powers to make them crash. However, after getting a dose of holy water over its head, it remained quiet, and the Warrens managed to give it a prominent spot in their museum.

If you want to see the incarcerated version of Annabelle, you should visit the Warren’s museum, which is a place filled with all kind of memorabilia from hauntings, demonic possession, and other misadventures.

Annabelle is one of the most famous creepy dolls. If she’s truly haunted, or if she was possessed by a demon, we’ll probably never know. In reality, she doesn’t look nowhere near as creepy as the movie version, but looks can be decieving. As always, there’s an important lesson to be learned from this though. If your doll starts moving on its own, then starts leaving cryptic messages? Time to kick it out. Or chop it up into pieces and burn it somewhere. Maybe getting a medium involved isn’t always the best cause of action. And when the thing starts bleeding, it’s time to call your resident exorcist.

Is the legend of Annabelle real, or a paranormal hoax? What are your thoughts on the story? Any other creepy dolls you’d like to read about, or do you have a creepy haunted doll story of your own to share? Feel free to leave your thoughts in the comments below.

Read more about this on: