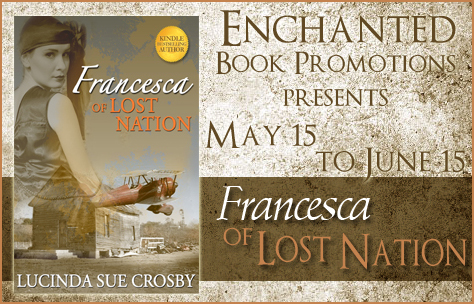 Surrounded by amazing storytellers as a girl (family members and friends) and having taught myself to read by accident at age 3, writing seems like the perfect undertaking for me.

Where did you get the inspiration for Francesca of Lost Nation?

My grandmother, Frances Ella Pittschtick Mendenhall, was the best friend I ever had. She was quite the daring and unconventional person, especially considering she was born in the 1890s. Like the lead character in this novel, Frances was born and raised in small town Iowa, was a dirt track county fair race car driver who never lost, was a pro caliber poker player and was the first woman in her county to attend college. How could you not write a book about a woman like that?

I read a certain predetermined portion of the text slowly. Whenever I find myself thrown out of the text or thinking about something else, I know the passage or sentence or paragraph needs reworking. I prefer reading out loud – or even getting (bribing) someone else to read the text out loud. Anything confusing, any balky, unrealistic dialogue, any boring or redundant phrasing stands out for me more when read aloud. I also often put a skeleton down – adding what I hope is uniquely expressed description and more active verbs later.

What was the most challenging part about writing Francesca of Lost Nation?

The story is written in first person by the now-adult, then-child, Sarah, who shared this great and adventurous summer of 1947 with her daring and unconventional grandmother, Francesca. Keeping the voice of the narrator on the child-like side when the story called for it and on the adult-looking-back side at other moments took planning and lots of rewriting. Also, the character Daddyboys is also a writer. Ensuring that his “voice” (cadence, rhythm, point-of-view) was unique from Sarah’s was another big challenge.

What was your writing goals?

My goal changes little whatever I write: I endeavor to remember that my reader has invested time and money into this encounter as well as giving over their conscious selves into my hands. I owe them my utmost respect and my best work, pristine copy, ideas that matter on many levels, the truth as I and my characters know it – I think of this as a sacred trust or honor-bound contract.

I have a novel to be released soon: The Cancer Club; a crazy, sexy tail of survival. Based on the real experiences of a select few cancer survivors and victims (including my own cancer episode in 1991), it takes an unprettified look at how a woman sloggingly and exhaustingly survives breast cancer and then stubbornly reclaims her self – her soul, her sexuality, her confidence, her LIFE. It is, hopefully, raw, thought provoking, scary and hilarious. 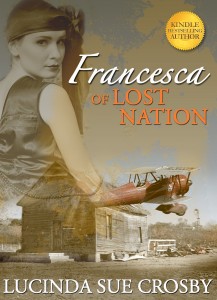 This family saga is “funny at times and filled with little pearls of everyday wisdom, it is as much a romantic thriller as it is a perfect little capsule of a time gone by. It is a book about love of all kinds – between grandmother and child, between child and dog, between man and woman.”

If you like Old Fashioned Romance Reads similar to Norah Roberts or Kristin Hanna for kindle, you will want to add this one to your collection:

Here’s a little about the story:

When a mysterious man named Matthew appears in the small Iowa town of Lost Nation, his sudden arrival raises questions about his past. Quiet with an apparent taste for rum, Matthew makes it clear he doesn’t want to make friends. He isn’t too pleased to be dropped off at Home Farm where the independent and eccentric Francesca doesn’t accept bad manners or booze binges.

Matthew doesn’t want to form personal ties and intends to move on as soon as his damaged leg from a recent plane crash heals. But a series of events draw him into reluctant relationships: One with the feisty Francesca, the second with her 10-year-old granddaughter Sarah.

In spite of her own reservations, Francesca finds herself falling for this brooding pilot but his past looms between the pair and what neither knows is that Sarah, Francesca’s 10-year-old granddaughter, has encountered a stranger of her own … leading to a climatic confrontation that will put her and her grandmother’s life in danger.

There are plenty of eccentric characters, including Francesca who is quirky and full of secrets – she keeps the town gossips busy. There are some dramatic family dynamics that cause tension and uneasiness at times. Because the story is told through the wide-eyed 10-year-old Sarah, this romance mystery is humorous at times.

Readers love this kindle romance fiction, because it has a touch of everything: friendship, humor, romance, adventure and mystery. 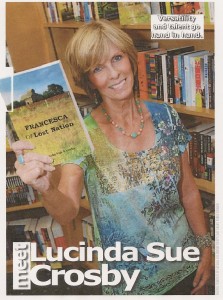 Lucinda Sue Crosby is an International Kindle Bestselling author and award-winning journalist and environmentalist as well as a published and recorded Nashville songwriter. She’s also a former film and television actor, professional athlete and sports commentator. Lucinda Sue has always had a love affair with the written word.