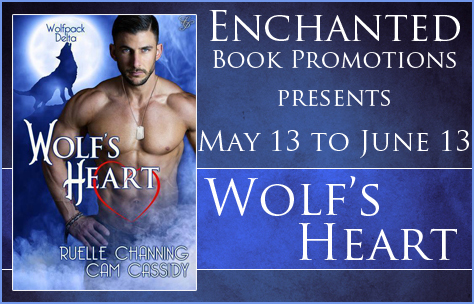 I never really knew what it was I wanted to be when I grew up.  I have always been an avid reader, almost anything I could get my hands on.   It was a couple years ago a friend and I were talking and it came to me.  I can come up with some pretty good story ideas and just finally decided to give it a try.

Where did you get the inspiration for Wolf’s Heart?

It actually started as Ruelle and I just messing around, tossing out ideas.  She loves the shifters.  I’ve always liked books with a military theme.  We just combined the two.

Like giving birth, lol.  When I sit down to write for the day, the first thing I do is re-read what I had written the prior day.  That helps catch errors and inconsistencies.  After the book is complete I read it completely before I send to critique. Then there are more edits.  After that it goes to the beta readers…. More edits.  After a final read over I finally submit.

I think being a debut author is the hardest part.  There are so many things that you don’t anticipate.  Everyone thinks you write a book, send it off and you’re done.  From the time we finished writing it until it was released was almost a year.

Book two in the series, working title Wolf’s Salvation will be released by the end of the year.  I have two solo submissions that I am currently working on and another co-authored series.

Just finishing up the edits for Wolf’s Salvation to get it into the hands of the beta readers.  Then it is back to my submission calls for Fated Desires which will be released in 2015. 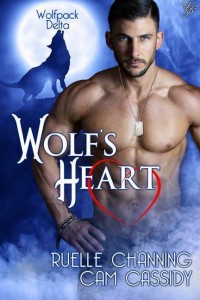 Wolfpack Delta gave Ryden Coulter’s life purpose after the attack that not only changed his life, but destroyed his only hope for happiness. While the woman he left behind is always on his mind, he knows that his new-found strength lies in the power of his wolf, not in his heart…or so he thinks.

Being born for the sole purpose of saving another’s life isn’t quite the way one imagines coming into the world, but Carlee O’Shannon knows no other reality. The one time she ever opened her heart, she lost it all. Vowing to never let another person hurt her that way again, she’s unprepared for Ryden to come back into her life.

Together again, out of necessity rather than desire, Ryden and Carlee will be forced to fight not only for their lives, but the lives of Ryden’s unit. Secrets and danger lurk beneath the surface, and it will take more than the strength of a lone wolf and the woman he loves to fight their way out.

As an adult, Cam is married and the mother of three ornery children who keep her on her toes.  The cup of coffee in her hand is a trademark.   She works full time in the medical field.  In her spare time,  she spends every minute reading and writing.  Watching her children ride horses, dirt bikes with a notebook in hand to never miss jotting down that next all important story idea.

All of the “hard work” reading and writing sitting beside the fire drinking a glass of wine.  Or was it between loads of laundry, recently paid off with her first publication.