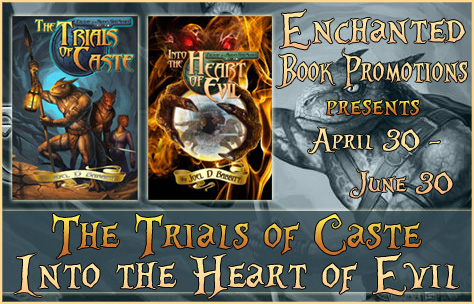 I’m interviewing Joel Babbitt, author of fantasy novels “The Trials of Caste” and “Into the Heart of Evil”. Welcome on my blog, Joel.

– When did you know you wanted to become an author?

– Can you give us a short synopsis of your books?

The Paladin of a Hidden God Series is about a group of young creatures called kobolds who come of age in a primitive tribe at a time of destiny for their race.  The Trials of Caste is all about the coming of age ritual that their race conducts, which was handed down to them through the ages from a god-like being called The Sorcerer.  In this competition all the young male kobolds compete for their place among the social castes of their tribe.  At the end of the Trials of Caste, these new warriors are sent on a quest!  This particular year, the leader of their tribe feels the call of some higher power directing him to send these new warriors to find a lost artifact of great power.  And so, these new warriors are unknowingly sent Into the Heart of Evil…

I am absolutely a perfectionist, so The Trials of Caste went through three major rewrites, plus seven minor revisions.  Into the Heart of Evil went through almost the same.  I firmly believe that if a reader is going to invest several hours in reading my work, it should be absolutely awesome!  Working with professional editors has been enlightening as well.  I thought I was pretty good at English—turns out I still had a lot to learn, and I enjoy learning more each day.

– What was the most enjoyable part about writing your book?

I absolutely LOVE art.  I fill my books with it.  My paperback books are beautiful, elegant show pieces.  They’re a pleasure just to look at.  The art on The Trials of Caste is noble and redeeming, while the art on Into the Heart of Evil is dark and scheming.  I love seeing my initial concepts being turned into magnificent art by the several artists I’ve worked with on these books!

Publishing book three of the Paladin of a Hidden God Series, publishing episodes two and three of my science fiction serial Life Sticks, and getting half way done with Ella Sister-Daughter, which is a stand alone novel about a young Viking princess who just wants to choose her own path in life, despite what everyone is telling her.

– Are you working on something? If so, can you tell us more about it?

I have a stunningly alien series called Life Sticks about a primordial clan on the edge of a galaxy under invasion by a ruthlessly effective star-traveling bug race.  The first short episode, called Clan Lord, introduces the main character Razz and sets up an exceptionally original scenario.  Here’s what one reviewer wrote:

“The story was amazing, creative and endearing. With quite a few unexpected plot turns. I wish it wasn’t a serial, because now I want to know what happens next. I got a taste of a wonderful new world, presented in a wonderful new and refreshing light… Finally a new story, with new creatures, and a new stage.”

I’m currently working on readying episodes two (Hunt Master) and three (Puppet Master) for publication in June.  I love writing about Razz!  He’s just plain awesome!  At 99 cents, it’s a steal!  For that matter, it’s free through 20 May!  So get it now here on Amazon!

Title: The Trials of Caste

A Game of Destiny, a Throne, a Paladin, a Prophecy… and Kobolds

In this explosive first novel in the Paladin of a Hidden God Series, the ancient game of destiny known as the Trials of Caste shows the Will of the Gods and reveals the Hand of the Fates.

A fresh voice in the Fantasy genre, Joel Babbitt’s story of Durik the kobold and his companions is genuine, triumphant, and absorbing.  In two days and two square miles of caverns, Joel takes the reader deep into the heart of a tribe in turmoil.  Looming insurrection, insurgent pacts, ancient powers, noble designs, and young aspirations combine to make the unforgettable coming-of-age tale of Durik the kobold and his companions.

With their year of training now past, Durik and six other young warriors are about to undergo the Trials of Caste where all of them will strive for the coveted position of elite warrior and the prestige and power that comes with it, though only one will win.  Simultaneously, a deadly conspiracy threatens to destroy their tribal leaders and seize the throne for its own evil purposes.  Durik and his six companions must each chose sides as the actions of an insurgent pact bring a day of decision for all the children of Kale.  Yet through it all, as if from beyond where the ancestors go, an ancient power calls to Durik, strengthening him as he and his closest companions risk everything to fight against this encroaching evil. 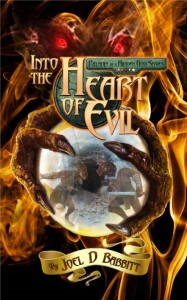 Title: Into the Heart of Evil

In this second novel of the Paladin of a Hidden God series Joel masterfully weaves an explosive tale that puts Durik and his companions in a desperate fight for their lives, one they will only survive if they are true to themselves and to each other.

It was supposed to be an easy journey… a simple first step for a band of new warriors.  But evil has an agenda of its own, and relentless conquest strikes when it chooses.  And what can so few do against so many?  Yet evil is not the only power that stirs in the southern valley; from deep in their prophetic past an ancient power also has returned, nurturing, watching, and helping its paladin.  On the anvils of danger and sacrifice Durik and his small group of companions will be forged by the hammer of their mutual hardships into an able band of heroes, but only if they can survive the journey into the heart of evil… 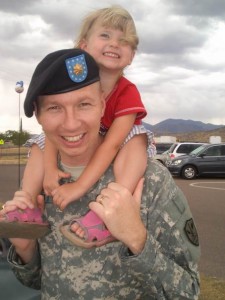 Joel Babbitt is an officer in the U.S. Army and a bishop in his church.  He has spent his entire adult life living and teaching principles of leadership and team building in a warrior environment.  Joel and his family live in Maryland, USA.