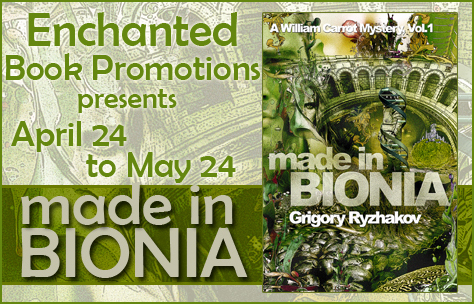 I’m hosting an interview for the book tour for techno-thriller / scifi novel “Made in Bionia”. I hope you enjoy the interview!

When I nine or ten, I performed my poem in public at a summer camp. There was a group of Japanese visitors there, and one of them told me that I’m to become a great Russian poet. Well, I turned into a British scientist in the end, but I decided I can also be a Russian writer.

Where did you get the inspiration for Made In Bionia?

I get inspired by so many things: nature, great classics, Hollywood blockbusters… In the end, my writing is just a product of the sub-consciousness.

Tedious. I self-edit a lot. First, structural revisions, I test the story tension, I swap scenes around. Then I do copy-editing. And then I send my book to the editor. Editing is not my strength, but I am working on it.

What was the most challenging part about writing Made in Bionia?

It was hard to tie in multiple subplots together, to try not to spill too much too early.

I need to continue William’s story, this is my current project. In Made In Bionia, Welka, my protagonist’s love interest, took a good care of William. Now, the real trouble is coming, and this time William has to face it by himself.

I also plan to finish working on a catalogue of modern Russian books. Some great gems have been written in my home country since the collapse of the Soviet Union. Russia may have a dubious political reputation at the moment, but the Russian art has always dazzled the surrounding world, even when the country was ruled by terrible figures like Stalin. If you are interested you may check out my blog’s section on Russian literature. 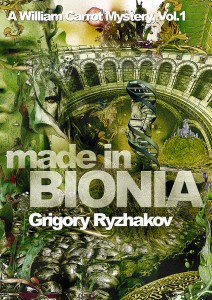 Book Blurb:
Why does Rasa A, the world’s most secret society, want William Carrot dead? And who is William Carrot? He has to figure this out before it’s too late.
In a world very much like ours, the Third Great War is over and the ocean is dying. Scientists in the country of Bionia invent a new technology to stop an ecological catastrophe. Can William get it before it is seized and destroyed by terrorists? With love, betrayal and marine virology standing in his way, it will be hard to call, especially when his own life is at stake.
A novel in the best traditions of science fiction, Made In Bionia has it all: love, mystery, cutting edge science and alternate history.
Your journey begins in Bionia. 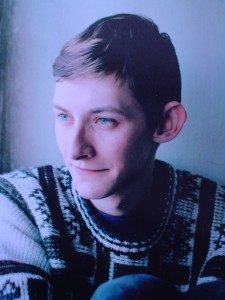 Grigory (a.k.a Grisha) Ryzhakov grew up in the Siberian Far East, bathing in the icy waters of Seas of Okhotsk and Japan and playing hide-and-seek in the snowdrifts that carpeted his native Sakhalin Island. He later travelled thousands of miles to vibrant London, on the way collecting his MSc degree in biochemistry at Moscow State and PhD in molecular biology at Cambridge University. Meanwhile, Grigory has been ceaselessly creating poems, songs and prose until eventually he wrote his debut novel “Mr Right & Mr Wrong”. “Usher Syndrome” was his first published story, also adapted for the stage and performed at London’s Barons Court Theatre in 2010.