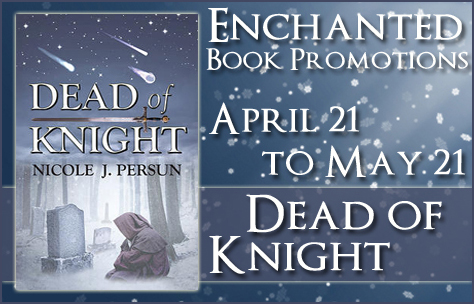 I’m hosting an interview with Nicole J. Persun, author of fantasy novel “Dead of Knight”. Welcome to my blog, Nicole!

That’s a tricky question! I started seriously writing when I was thirteen, but I didn’t really consider being an author—in the sense of publication and a career choice—until about three years later. It wasn’t a black and white decision, either. I started attending writers’ conferences and reading books on writing and pretty soon I was a writer. I sort of just fell into it.

Where did you get the inspiration for Dead of Knight?

Dead of Knight came from the James Blunt song “Same Mistake.” I had never heard the song before and then I heard this part:

And so I sent some men to fight/ And one came back at dead of night/ Said he’d seen my enemy/ Said he looked just like me/ So I set out to cut myself/ And here I go.

And I thought, “I could write a book about that.” So that’s what I did.

When I’m working on a novel, I follow a certain protocol: write the first draft to completion, then edit. I’ve seen many writers try to edit as they go, get frustrated, and then never finish their book. I’ve found that the most important thing when starting a novel is to get it all down without concern for editing. Yes, it will be messy when you’re done, but at least then you have something complete to edit. It’s hard to edit something when not everything is there.

What was the most challenging part about writing Dead of Knight?

Dead of Knight was perhaps the easiest book I ever wrote, in the sense that I rarely had a bad day, was at my most prolific (writing an average of 1,600 words per day), and the characters and story flowed smoothly. That being said, it was also the darkest book I have written, and writing some of the rougher scenes was difficult. It’s also a pretty complicated book, since there are so many characters. Organizing the characters in terms of who knows what, who is in what city, etc. in order to remain consistent was a challenge.

My goal is simple: to write more. College, work, and life in geneal have a way of taking away from writing time, and I would really like to dive into a project full force again. With my recent graduation, more work hours, more speaking obligations, considering MFA programs, and potentially facing a move, this will be a challenge. But being a writer means making time to write, and I’m up for the task.

I’m working on a few things right now. One is a book about my father, Terry Persun, and his writing—an ongoing project that was part of my thesis for my Bachelor’s degree. Another is a collection of short stories and poetry all centered around a bakery owner named Elle. Yet another is the second installment in Dead of Knight. Other than that, I have spare short stories and poems that I’m always working on. It’s never-ending.

About Dead of Knight 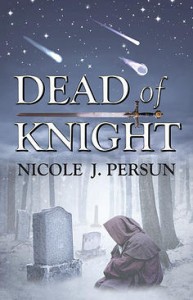 King Orson and King Odell are power-stricken, grieving, and mad. As they wage war against a rebel army led by Elise des Eresther, it appears as though they’re merely in it for the glory. But their struggles are deeper and darker. 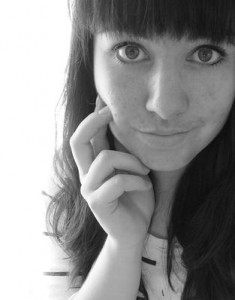 Nicole J. Persun started her professional writing career at the age of sixteen with her young adult novel, A Kingdom’s Possession, which later became a finalist for ForeWord Magazine’s Book of the Year Award. Aside from novels, Nicole has had short stories, flash fiction, poetry, and essays published in a handful of literary journals. Her inspiration is drawn from the latest studies and findings in biology, astronomy, archaeology, psychology, and any other form of scientific, historical, or artistic discovery. She often speaks at libraries, writer’s groups, and writer’s conferences across the country. Currently getting a degree in creative writing, Nicole lives in Washington State. For more information, visit Nicole’s website at: www.nicolejpersun.com.