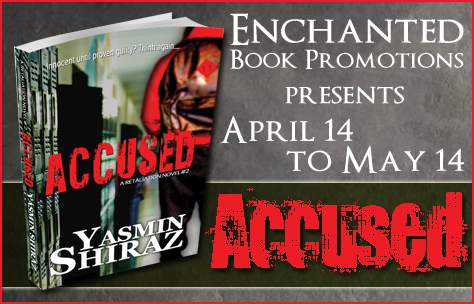 I’m hosting an interview with Yasmin Shiraz, author of YA real life novel “Accused”. Thanks for answering my questions, Yasmin, and welcome to my blog.

I started writing in journals when I was a pre-teen. And, I always loved books. So, I probably knew that I wanted to become an author when I was around 12 or 13.

Where did you get the inspiration for Accused?

I conduct empowerment workshops for youth. I write articles about trends with youth culture so I’m always thinking about situations that are happening in our society.  But, the idea for Accused popped in my mind one day while I was sitting at my desk. I began to hear character voices from the story and the book grew from there.

After I write the first draft, I polish it 2 – 3 times before it goes to my editor. The editor then reads it once and sends the recommendations to me. I make changes and then send it back to the editor again. We repeat the process but then I re-read the entire manuscript, make further adjustments then I submit it to a different proofreader. After the proofreader, I send it to a beta reader. There may be additional changes made based on the comments of the proofreader and the beta reader. After those changes, I consider the editing process complete.

What was the most challenging part about writing Accused?

I was getting over a bit of writer’s block shortly before writing Accused.  Therefore, when writing Accused, I was concerned about being able to finish the book. I really pushed myself and had to stick to my schedule and not allow fear to get in the way.

I would like to complete 4 novels in 2014 and I’d also like to sell a movie script or two.

I’m writing more books. I’m thinking about ways to expand the Retaliation series.  I’m a filmmaker as well and so I’m often working on ways to put my writing on the big and small screens. 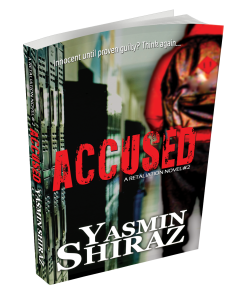 An easier and more peaceful life seemed to be destined for Ahmed and Tashera when they left Washington, DC and entered Georgia Atlantic University.  But when Ahmed is accused of a crime that he didn’t commit and begins to be tried in the media, his popularity plummets, his self-esteem suffers, and his dreams of playing college basketball disappear.

Meanwhile, there is a serial rapist on campus who has been attacking freshman girls at record numbers and forcing them to keep silent. As Tashera learns about the girls, she begins to close in on the rapist. But is the attacker too crafty to be caught? Will the state prosecutor ignore key evidence to instead focus on the fame that comes with convicting a high profile basketball star?

Tashera is beyond stressed as she divides her time between trying to find enough evidence to clear Ahmed while at the same time stopping the rapist who roams the campus of Georgia Atlantic.  Ahmed and Tashera’s journey into a new life away from home is more challenging than they ever thought that it would be.

An Amazon Top 500 Book Reviewer had this to say about Accused:

“I recommend it for teen readers… Shiraz has a knack for writing in the voice of teen characters without having to resort to obscenities. It’s an important and worthwhile YA novel.”

Yasmin Shiraz is an author and filmmaker. She has written several other books including Retaliation (A YALSA Top Ten Quick Pick for Reluctant Readers,) The Blueprint for My Girls and Exclusive. She is a screenwriter and film director who produced the Can She Be Saved? documentary and the Sources web series. She resides in the suburbs of Washington, DC.