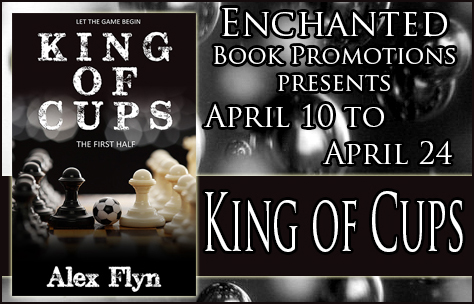 I’m interviewing Alex Flynn on my blog today, author of contemporary romance novella “King of Cups”. Welcome to my blog, Alex, and thanks for answering my questions.

I’ve always liked making up stories, my parents and grandmothers still keep silly short stories I used to write when I was just a small kid, some of those even graphic stories (I drew a book about adventures of a little squirrel) and some I used to type on a typewriter.

But it was the age of 18 when I decided that I want to master this craft and, hopefully, one day to write a book that I would want the world to see.

Where did you get the inspiration for King of Cups?

I’m a huge fan of European football (soccer). The passion of the game, of the title race were the things that I wanted to present in the book, and also how personal things affect professional players, how certain changes in life can alter the way a player is acting on the pitch.

I rewrite a lot, sometimes making characters do the opposite of what I imagined them doing first. There are certains things I sometimes want to be unchanged, because they make the book what it is and what it has to be, but some scenes get rewritten almost completely.

I work with a professional editing company who help me mostly because English is a foreign language to me. This one was particularly challenging because the main events unfold in London and my English is quite general, so the editor has helped me a lot with getting the words and expressions right.

What was the most challenging part about writing King of Cups?

I’ll be honest. There is a world I’m using in the book that I know very little of, the world of publishing.

But it’s not the part of the book that I’m trying to depict in perfect detail, to me it’s a setting for the characters to develop in certain ways. It was probably the thing that had me thinking whether I could pull this off the most, but it’s also fun to try and guess what it would be like in a real publishing house.

Also gathering the courage to actually press the “Publish” button.

Parts two and three of King Of Cups are in the process of being edited right now. They will be called “The Second Half” and “Extra Time” respectively and together all three will make a complete novella.
Also I’m working on a book in Russian (which is my native language). This one has been in the work the most, for almost eight years now and is planned as a series of five books. It is a fantasy/new adult book and I’m enjoying the story very much so far.

And I’ve been writing a series of books about a rock band for four years now.

I would love to finish the first draft of both books I mentioned earlier. They will be different from King Of Cups, but I can’t see myself writing in only one genre at the moment. 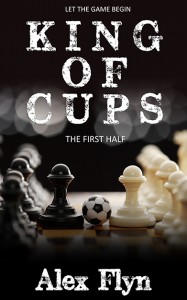 Shy and young, Sarah dreams of working in a fashion magazine, but due to circumstances ends up doing what she never thought she would be doing. Not only she needs to find her way back, she also finds herself in the middle of the British football love drama, with a crazy champion title chase on top. And the Romeo and Juliet of the football world aren’t going to make her life any easier.

Alex Flyn is a young aspiring author who enjoys reading books, travelling the world and watching television shows. At 18 years of age, during a long train journey, Alex simply wondered if it was possible to write a book, and decided to put the idea to the test. Starting in coffee shops, Alex penned three manuscripts, and now, almost eight years later, is proud to share the results of all the plotting, typing and coffeeing in the first e-novella, with more on the way.

Author page where the book will be available for pre-order or later: