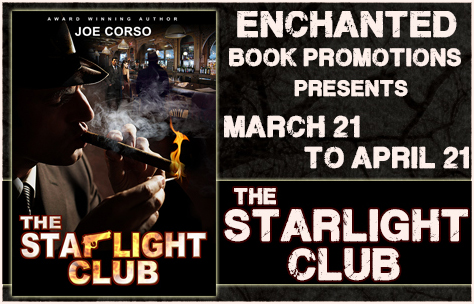 I’m interviewing Joe Corso on my blog today. Joe is the author of historical crime novel “The Starlight Club”. Thanks for answering my questions, Joe, and welcome to my blog.

Not until I was 75 years of age. I never knew I could write. In fact even now after having received 5 awards I don’t consider myself an author, I consider myself a story teller who tells stories that people seem to like.

Where did you get the inspiration for  The Starlight Club?

My inspiration for the Starlight Club came from a bar my father owned in Queens. I described his bar as the Starlight Club only his bar wasn’t world famous. But there was a Starlight Club on the next block. It was a social club and I liked the name so I used it as the main club and I named the social club The Corona Gentleman’s Club. I liked all of the names I used in the book. for example I met Jimmy The Hat once and I liked the name so I made him an important part of the book. I met Trenchie in Manhattan after he was released from prison after serving 10 years. He was a very quiet man who minded his own business and never said much. In fact he was married to a very fine woman and I never could figure that out. I brought him to Queens and made him part of the Queens mob. Big Red who is the central character in the Starlight Club series of books was a small time bookmaker and loan shark who operated out of a little restaurant on the west side opposite the piers on Little West 10th Street. I brought him to Manhattan and made him the main character in my book

Write the book. And then go over each chapter 15 or 20 times to get it clean enough to give to a professional editor. All of you new writers out there who are reading this – remember one thing. YOU MUST GIVE YOUR BOOK TO A PROFESSIONAL EDITOR. You are not qualified to edit your own work. Just keep that in mind.

What was the most challenging part about writing The Starlight Club?

Whenever you are writing a crime book and you are using their real names, the rule is to make sure all of your characters are dead. I may have broken that rule.

I want to concentrate on making sure Lafitte’s Treasure and The Starlight Club 5: Revenge are as good as I can get them and after I’m satisfied I’d like to write at least two books before the end of the year. The Lone Jack Kid is one and the other book I haven’t decided yet, but as I mentioned before, I’d like to do one more book with a masonic theme in it.

Lafitte’s Treasure and The Starlight Club 5

About The Starlight Club 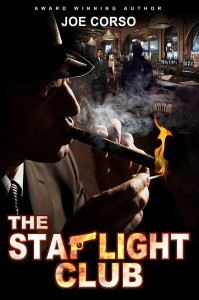 The Starlight Club was jumping . . .

“They looked like mob guys. They had that arrogance exuded by those who liked to intimidate – those who were the proud purveyors of fear.” Amidst the nightly gaiety was the back room, where business deals were made, hits were ordered, and territories were divided. An image of the author is also attached.

Trenchie not being a “rat” is just released from his ten year prison sentence. A new life is waiting – complete with envelopes of money and a steak house to call his own. He finds the woman of his dreams who brings along ex-husband baggage. Hit man Jimmy The Hat finds unexpected fame in the most unlikely of places, yet he always stays true to the “boys”, especially Big Red. “Crazy Joey Gallo” and his brothers break away from the Profaci family and go “rogue, on their own now. They split their gang into several small groups and spread them out over the five boroughs.”

The Starlight club can be purchased on amazon http://www.amazon.com/The-Starlight-Club-ebook/dp/B0098L3LQW/ref=sr_1_1?s=digital-text&ie=UTF8&qid=1353949837&sr=1-1&keywords=the+starlight+club