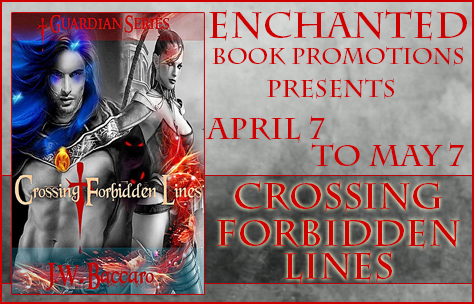 I’m interviewing J.W. Baccaro, author of coming-of-age fantasy story “Crossing Forbidden Lines”. Welcome to my blog, and thanks for answering my questions.

I’ve been creative for as long as I can remember. I drew/wrote at least a dozen of my own comic books when I was seven, and as I grew older I soon got into reading heavy material like Tolkien’s famous “Lord of the Rings.” Upon finishing that trilogy, I knew what I wanted to do. I wanted to be a story teller and an author. The reason was not for the hope of becoming famous (although that would be so cool!), but for the benefit and/or therapeutic satisfaction of the creative process.  You know, putting your heart onto paper (or a computer screen), and bringing those angels and demons to life.  J

Where did you get the inspiration for Crossing Forbidden Lines?

Originally Crossing Forbidden Lines was supposed to be the second half of book one: Guiding the Blue Flame.  My previous publisher thought it was just too long for one book and suggested I separate it. I did, and so CFL is now book two in my Guardian Series.

CFL is a grim tale. We get to see the real evil our heroes have to face. The protagonist also experiences some hellish tests and tribulations. Though cruel, it is necessary in order to break him of his egotistical mindset. See, once he unleashes his Nasharin powers he feels unstoppable and thinks he can crush the forces of darkness threatening his world all by himself. He is confident, but not mature in mind, not yet. He still has a lot to learn.

I actually have an editor. She is also a paranormal romance author. Her name is Leanore Elliot. When I finish my manuscripts I pass them on to her. I’m always excited to get them back, see what my errors were, learn how to improve, and adore the new polished version my editor has made for me. Leanore ROCKS!  J

The battle between our hero Darshun and the Demon Lord Abaddon.  It was complex. The fighting has many sequences to it. It’s not that they just meet, fight and one of them wins. There’s plenty of emotion behind it, we get to see our hero’s true potential—why he truly is the Guardian of Prophecy, and we also see the wickedness of Abaddon. It’s a roller coaster ride of a fight. The ending surprises the reader.

To finish my sixth book and have it out by Halloween. 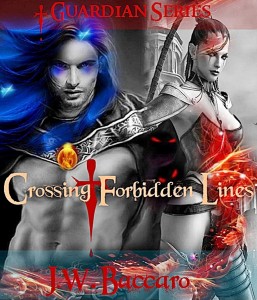 The Elemental Crystals were originally created to protect the earth. However, Abaddon the Demon Lord plans to use them to transform the earth into a realm of haunting darkness and witchery, forever. In Guiding The Blue Flame, a young but powerful Nasharin Warrior, Darshun Luthais is drawn to one of these magical crystals of immense power. He learns he’s the fulfillment of the two thousand year old Prophecy of the Guardian. The Wizard Olchemy informs him that he is the protector and guardian the earth has been waiting for.

With Darshun’s ability to sense the Elemental Crystals, Olchemy devises a plan to obtain them. Accompanied by a small group of companions the hunt is on, in hopes to retrieve the long lost crystals before the Demon Lord claims them. During the journey, Darshun encounters Aurora, the sole survivor of a now extinct people. He falls in love for the first time, and now resents the so-called Guardian of the Prophecy role.

Due to Darshun’s naïve spirit he’s caught off guard by Nayland, a mysterious dark warrior who confronts him about his abandonment of the quest. He reveals that he too, is a Nasharin warrior, though far exceeding Darshun in skill and power. Darshun’s father, Mirabel saves him from death at the hands of Nayland.

Outmatched and in bewilderment from the attack, a fire awakens in Darshun. He plans on reaching his father’s level of power with a journey to Shajin Island, where Nasharin Warriors train. He’ll be gone for only one day in Earth realm time, but due to the magic of the rigorous island, it will be seven long years for him. Entering the mystical realm of Shajin, he eagerly awaits its life threatening challenges.

In Crossing Forbidden Lines, Darshun faces a solemn heartbreaking betrayal by the woman he loves and is left dying from a hideous torture inflicted by the Queen’s guards. He is healed by a female Elf, Kelarin who he calls his angel.

Feeling his power to be tripled, he battles Queen Talvenya’s son and slays him. Thus, earning the Queen’s undying vow of revenge. Afterward, he faces the Demon Lord in a fierce battle which nearly kills him once again. After a mysterious Elder nurses him back to health, he returns to his father, Mirabel to help defeat the massive army of the Demon Lord. 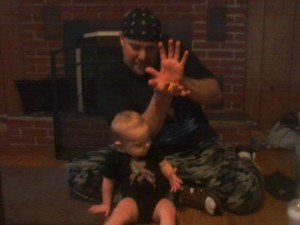 J.W.Baccaro is the author of the Guardian Series. In his free time he enjoys literature—fiction and non-fiction, playing electric guitar in the heavy metal band Rigor Hill, Consciousness and NDE studies, and thinking how to intertwine his thoughts about the world’s myths, legends and distinct truths into his novels. He lives in upstate NY with his wife Melissa, his son Alexander, his two German Shepherds and his three cats.

Buy a copy of the book on Amazon.