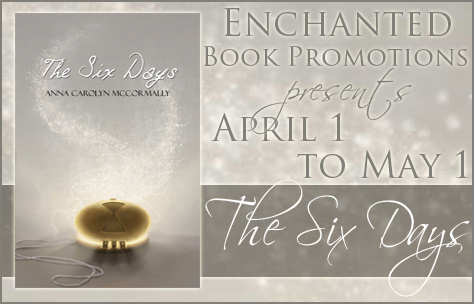 I’m interviewing Anna McCormally, author of YA fantasy novel “The Six Days”, on my blog today. Welcome to my blog, Anna, and thanks for answering my interview questions.

One of my favorite quotes about this is from William Faulkner, who said: “Don’t be ‘a writer’. Be writing.” I’ve been writing stories since high school. It was in the last couple of years of college, though, that I sort of said to myself, okay, McCormally, are you going to take yourself seriously and do this writing thing right? And that’s when I started making time for writing and working much harder at it, and treating it less like a hobby and more like a job.

Where did you get the inspiration for The Six Days?

It’s been so long I don’t even remember! It came to me in bits and pieces over the course of many years before I even started writing.

Long! When I finished the first draft I printed the whole thing out. It was 400 pages! I was taking the bus from New York to DC that night and I spent the whole trip reading and making notes. There were so many problems with that first draft of course, but taking a step back and looking at the story as a whole really  helped me see where I needed to make changes.

When I had a second draft I had people start to read it…and from there on out it was a very collaborative process. I’d get notes on chapters from three different people and then frantically rewrite and send the new version out! My friend Rosa, who shared our tiny Brooklyn apartment with me during this time, deserves a medal. I did a lot of shouting and pacing.

Tying it all up into a cohesive narrative! I started with fragmented scenes and conversations and relationships and the biggest challenge was making it all hang together.

I’m looking forward to nailing down a more set schedule and writing routine. I am a slow writer so setting aside long hours is very important if I’m going to get anything written!

I hope to have a draft of The Six Day’s sequel finished by the end of the summer. Giant Squid Books is also working on a couple of exciting things which will  be announced officially soon–one is an anthology of feminist sci-fi and fantasy stories written for teenage girls. We’ll be calling for submissions soon, so if you’re a writer and that’s your cup of tea, be on the lookout!

About The Six Days 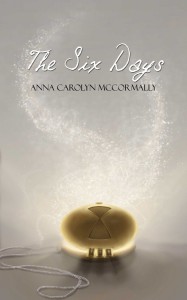 Fifteen years ago, in the middle of the night, Jamie Carpenter’s mother went up to the dark lighthouse on the cliffs. She never came back.

Yesterday, Jamie had a nightmare: his little brother disappearing like their mother did, through the door of the lighthouse, a door that has never opened.

Today, the nightmare came true. Jamie’s brother is missing. And not just missing–he’s been abducted, taken through the lighthouse door into the world of magic that lays beyond.

With his best friend Nia at his side, Jamie crosses into a world he never knew existed–but Emanu is not the fairytale world of childrens stories. Desperate to understand who took Danny and why, struggling to survive in a world of shadowy magic, Jamie and Nia seek the help of the Council of Witches. As they uncover more and more of Jamie’s family secrets and unknown powers, it becomes clear that Nia herself may be something more than human–and that it’s her the Council views as their biggest threat…

Swept up in a dark political game they don’t understand, burdened by magic they don’t know how to use, Jamie and Nia are going to have to learn fast if they’re going to survive Emanu and rescue Danny Carpenter. There are only six days until the gate between worlds closes again. 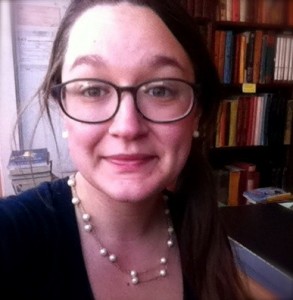 Anna Carolyn McCormally currently manages a small used bookstore in Washington, D.C.. She has a tattoo of the Deathly Hallows and blogs about YA fiction at www.giantsquidbooks.com.. Her short fiction and poetry has been published in pacificREVIEW, Quantum Fairy Tales and 3 am magazine. Follow her on Twitter @mccormallie.