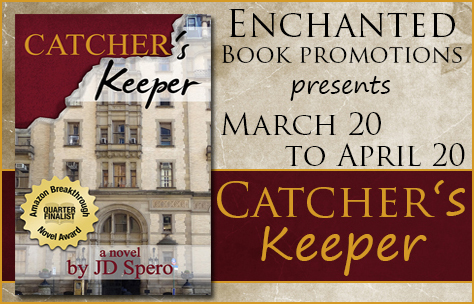 When asked how long I’ve been writing, my standard answer is: “Just over a decade.” But truth be told, I have been writing ever since I can remember, filling childhood journals with poems and existential, prepubescent musings.
I didn’t consider being an author until my late twenties, when I had gotten in on the ground floor of a web design firm in 1996 and thought I’d make millions by the time I hit thirty. That didn’t happen. But the experience was so tumultuous, I started writing about it as a way of catharsis. That became my first novel (unpublished), entitled Giddy-Up, Start-Up. I may go back to it someday.
Where did you get the inspiration for Catcher’s Keeper?
Years ago as a student teacher at Andover High School, my mentor handed me a VHS tape of an old Dateline video that featured Mark David Chapman’s fixation on The Catcher in the Rye and its influence in his murder of John Lennon. Every subsequent year I taught Catcher, I would play that video for my class—and found myself equal parts enthralled and horrified with the tragedy again and again.
This book was born from that fascination of mine—how a novel could move someone to act in such an extreme way. I also couldn’t help but wonder what Holden would have thought if he knew what his words triggered. One of my writing teachers once said it is sometimes easier to outline your novel from the “crisis” backward. In order to place Alden (Holden) where Lennon was shot, I had to publish the report he wrote in the mental clinic (his journal aka The Catcher in the Rye) and somehow have him meet Mark David Chapman. As the book evolved, it no longer became about this incident, but how three siblings had to overcome serious familial issues.
What is your editing process like?
I wrote the first draft of this novel in just three months. Of course, this was just getting down the bones. The plotline was pretty solid, but my characters were thin…and passive. I gave it to a small group of readers and got some good feedback. After a few rounds of revisions, I hired an editor for a professional manuscript critique. That’s when the real work began. It was especially tricky because it’s written in three voices, and I had to treat each of the three characters as a protagonist in his/her own right. Each character has his/her own conflict, etc. When those revisions were complete, I hired a copy editor. A well-edited manuscript is crucial; and even the best of writers need an objective eye to zap those pesky typos.
What was the most challenging part about writing Catcher’s Keeper?
Without a doubt, it was portraying a believable Mark David Chapman. Initially, I had been swayed by my own bias and created an already-guilty Chapman. Something I definitely had to fix. I took the advice of character-building expert, David Corbett (The Art of Character), which forced me to do what I had been avoiding and, frankly, dreading: Get into Mark David Chapman’s head. Understand him. Know him. I read Jack Jones’s Let Me Take You Down: Inside the Mind of Mark David Chapman, the Man Who Killed John Lennon in just 2 days. It was disturbing, to say the least. Haunting. From here, I completely revamped the MD that appears in Catcher’s Keeper.
What are your writing goals for 2014?
I’d like to have another novel drafted by the end of the year. I’m in the outlining stages right now.
Are you working on something? If so, can you tell us more about it?
In addition to the project mentioned above, I’m currently querying a completed Middle Grade Magical Realism manuscript entitled PLAY FOR PAYNE, which is about a young piano prodigy who becomes seduced by a magic potion that gifts athletic prowess. The struggle she endures addresses timely issues such as staying true to yourself in the midst of heavy peer pressure. It also addresses performance-enhancing drug use that has been so prevalent in the news lately. 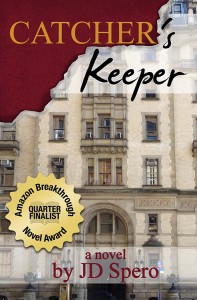 What if Holden Caulfield was around when John Lennon was shot?

In 1980 John Lennon was killed by Mark David Chapman, who believed he was Holden Caulfield, narrator of the classic The Catcher in the Rye. After the shooting, Chapman remained on the scene calmly reading the book, which he later offered to police as “his statement.” Catcher’s Keeper asks the question, “What if Holden had met Chapman, learned of his plan, and tried to prevent the assassination?” 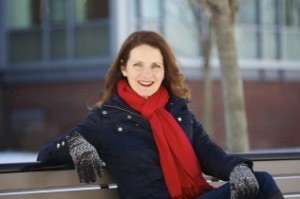 Johannah Davies Spero was born near a pristine lake in the Adirondacks and has lived in various cities such as St. Petersburg (Russia), Indianapolis, Dallas, and Boston. She has pursued her love of narrative through degrees in English literature, Russian language, and teaching—and has worked as an actress, a yoga instructor, a web design entrepreneur, a freelance writer, and a high school English teacher. She lives in the Northeast with her husband and three young sons.