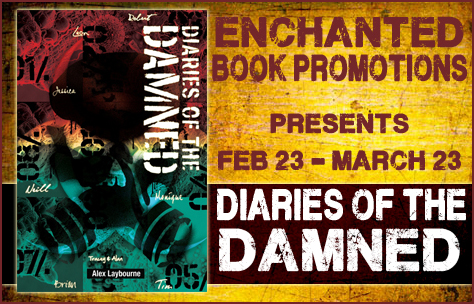 I’m interviewing Alex Laybourne today, author of zombie horror “Diaries of the Damned”. Thanks for answering my questions, Alex.

I guess I have always known. Ever since I could hold a pen I have written stories. At school I was producing stories that were longer then all other kids in my class. My essays and work as I hit my teens would triple the word limits we had been set. I always loved words, and writing them down. I started as a reader, devouring books, and my love just grew from there. I started by writing down random scenes that came into my head, and then one day, while on holiday in Spain, I decided to write a book. The result was (obviously) a pile of crap, but my passion and been born and my muse shackled herself to me.

Where did you get the inspiration for  Diaries of the Damned?

The story kind of came to me itself. I never plan much of my writing in advance, I just let the story evolve as it goes. I don’t like to limit myself with an outline, because it stifles the creative process. I had an idea that was simple, a group of people talking of their survival. It was originally just going to be nine individual short stories, published in serial form. Yet as I wrote I noticed a running theme that become evident and with a bit of a tweak I turned it into the finished product that it is today. The full novel tells one story, with the survivors telling their tales, and through them, come to learn the truth of the outbreak, while each character can be read as a complete and individual short story.

I write the story without editing it. Once I am done I print it out and then go through with a red pen ad make my comments and changes. Once that is done, I go through and type everything up, one last sweep for grammar, or rather my own theories behind grammar. Then it is ready to go to my editor, who is absolutely fabulous. Once I get the comments from her and have them all typed up, it goes to beta’s and then to my publisher. I am a slow editor, so my process does need some tweaking I grant you.

What was the most challenging part about writing Diaries of the Damned?

For me, the most difficult aspect of writing Diaries of the Damned was keeping the nine stories different. I didn’t want to have any formulaic action to it. So  I strove to ensure that each character faced something different, something that made their story unique. Given my busy lifestyle and large family (I have four young children) finding time to write was also a rather large ask at times.

World Domination… I mean… Global Conquest… no, wait, I mean, writing.. yeah, writing is my plan. Aside from the Diaries of the Damned I have another vampire novel in with my editor, and two more novels planned to write before the year changes again.

My current project is one I hold very dear to me. It is the third installment of my horror trilogy ‘Highway to Hell’. It promises to be a hardcore horror adventure filled with hell, demons, angels and theological debate. I have only written 17,000 words, but have already melted a few people and skinned another man alive.

Diaries of the Damned 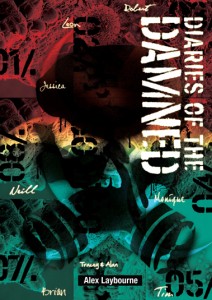 Title: Diaries of the Damned

The dead have risen and a desperate struggle for power has begun. The military are evacuating all survivors in passenger planes. With their destination unknown, one group of survivors led by a journalist named Paul Larkin, decide to share their experiences with the hope that when combined, their stories will reveal some answers that the government had not been willing to give themselves. 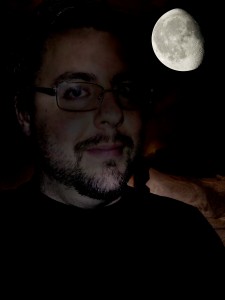 Born and raised in the coastal English town Lowestoft, it should come as no surprise (to those that have the misfortune of knowing this place) that I became a horror writer.

From an early age I was sent to schools which were at least 30 minutes drive away and so spent the most of my free time alone, as the friends I did have lived too far away for me to be able to hang out with them in the weekends or holidays.

I have been a writer as long as I can remember and have always had a vivid imagination. To this very day I find it all too easy to just drift away into my own mind and explore the world I create, where the conditions always seem to be just perfect for the cultivation of ideas, plots, scenes, characters and lines of dialogue everything basically, and when the time is right, I can simply pluck them from the allotment of my mind serve them up on the pages of whatever work is to be their home.

I am married and have four children and my biggest dream for them is that they grow up and spend their lives doing what makes them happy, whatever that is.