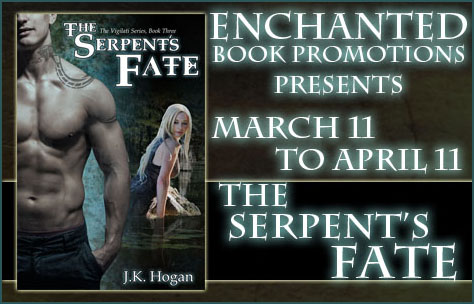 I’m interviewing J.K Hogan, the author of paranormal romance “The Serpent’s Fate”. Welcome to my blog, J.K., and thanks for answering my interview questions.

I started writing my first novel when I was 20 (I’m 32 now, so that gives you an idea), but I’ve always had a penchant for storytelling. It wasn’t until the spring of 2011 that I started writing what would become my first published romance.

Where did you get the inspiration for Serpent’s Fate?

That’s a complicated one…A lot of the inspiration for the plot and the setting came from the previous books in the series. Music is always a big driving factor in my writing. Fate, the female lead is a single mother, and I got the inspiration for that because I started writing this manuscript while I was pregnant with my first child. Matthieu, the hero, is a war vet and suffers from PTSD. I took inspiration from soldiers in general, but having a combat veteran as a father probably gave it more realism.

Terrible! I hate editing! LOL I’m sure I’m not alone. I’m a pantser, so I usually bang out a first draft straight through, although as I’ve matured I’ve started editing myself a bit in my head. Once I’m done with that, I step away from it for a couple of days and then I read through for major issues, continuity, and character development. I do that as many times as I need to before I send my baby to outside eyes (meaning my betas and editors). When it comes to making editing decisions, I’m always more likely to go with my first instinct or gut feeling.

What was the most challenging part about writing Serpent’s Fate ?

The most challenging part was writing it from the perspective of two characters who basically have no idea what is happening to them. The books are about women who find out they are from an ancient race of primitive witches, and have all kinds of innate powers, and the men they end up with are sort of destined for them, if you will. In the previous books, there have been secondary characters that have been able to help these women and their men find out more about their heritage, but in The Serpent’s Fate, that doesn’t happen until much later on in the book. So the reader has to learn along with the main characters. It is incredibly difficult, but worth it for a more authentic POV.

I’ve already accomplished the first couple: to get The Serpent’s Fate out to readers, and to publish my first m/m romance (I Survived Seattle – March 19th from Wilde City Press), a genre that is near and dear to my heart. I’ve planned two more books in that series, I’m working on an m/m paranormal, and I have another idea floating around for an m/f contemporary (with cowboys??). So many things I want to do, so little time!

What are you working on at the moment?

Right now, my primary focus is the sequel to I Survived Seattle, although I’m plotting several things in my head at all times! (See above) 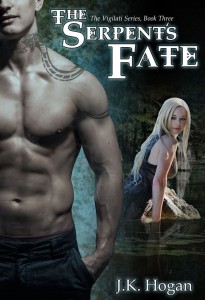 Can a traumatized veteran-turned-mercenary who is tormented by voices in his head be saved by the love of a wayward single mother with demons of her own? Afflicted by PTSD from serving in Afghanistan, and tormented by a childhood trauma, transient veteran Matthieu Rousseau struggles with the choices he’s made in his life. Estranged from his family, Matthieu drifts from one mercenary job to the next, until one thing stops him. Fate.

In hiding from her abusive ex-husband, musician Fate Callahan lives in New Orleans with her seven-year-old daughter. She remains in constant fear of being found, and her worst nightmare comes alive when a dark, dangerous stranger tells her he’s been hired to locate and kill her—but wants to save her instead.

Fate and Matthieu find themselves on the run together, fleeing from the hitmen and an unseen evil worse than anything else they’ll face. While just trying to stay alive, they become entangled in the battle between the Vigilati and the Lochrim; an archaic sect of witches and the evil creatures they are bred to fight. Unbeknownst to Fate and Matthieu, they are more deeply connected to the Vigilati than either of them could ever imagine.

They must join family and allies of the Vigilati to help save the human world, possibly saving each other along the way. Matthieu teaches Fate how to trust in love again, while she gives him back the one thing he never thought he deserved—family. 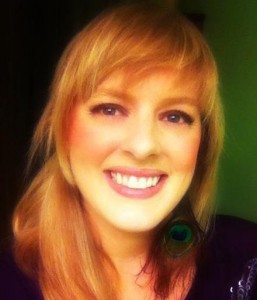 J.K. Hogan has been telling stories for as long as she can remember, beginning with writing cast lists and storylines for her toys growing up. When she finally decided to put pen to paper, magic happened. She is greatly inspired by all kinds of music and often creates a “soundtrack” for her stories as she writes them. J.K. is hoping to one day have a little something for everyone, so she’s branched out from m/f paranormal romance and added m/m contemporary romance. Who knows what’s next?

J.K. resides in North Carolina, where she was born and raised. A true southern girl at heart, she lives in the country with her husband and young son, a cat, and two champion agility dogs. If she isn’t on the agility field, J.K. can often be found chasing waterfalls in the mountains with her husband, or down in front at a blues concert. In addition to writing, she enjoys training and competing in dog sports, spending time with her large southern family, camping, boating and, of course, reading! For more information, please visit www.jkhogan.com.