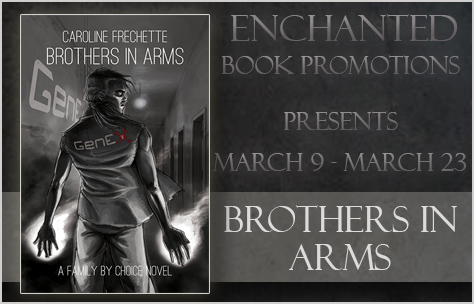 I’m hosting an interview with Caroline Frechette, author of supernatural novel “Brothers in Arms”. Thank you for answering my questions, Caroline, and for visiting my blog.

When I started writing, at 8 years old. I have pretty much wanted to be an author, without changing my mind, completely unwavering, for the past 25 years. I thought that meant I was going to end up in a gutter somewhere (I was a very cynical child) but it turns out you don’t actually need to starve to be an author, you just have to be really creative with your time management.

Where did you get the inspiration for Brothers in Arms?

As is the case with all my stories, inspiration never comes from just one thing; it’s a bunch of things that coalesce together in the mind in a kind of organic invisible process and eventually become a story, and it happens a bit unexpectedly. It was the character first (it always seems to be characters first with me); Alex was created about 15 years ago, in another story that was never meant to be written, and he found his way here. Then there was the superpower thing; I grew up reading comics, and it always bugged me that people had to be heroes or villains; couldn’t they just be people? So I had to write about that, of course. Finally, and that was something that could be said for the whole series, I wanted to try my hand at stream-of-consciousness. I’ve seen it done well so very little, and I’ve seen it done poorly so much, I wanted to see if I can rise up to the challenge. It’s an incredibly hard style to write well, so it was kind of a personal challenge.

First of all, I always wait three months (or more if possible) between finishing a first draft and looking at it again, because often when you look at a first draft too soon you see what you meant to say instead of what is actually written.

When I pick it up again, I read it over and make notes of the structure, character development and subplots to make sure everything fits and there are no loose ends (well, no loose ends that are not meant to be tied off in another book, of course). In Brothers In Arms, this part was extremely long (and the next part as well!)

Third revision is mostly dialogue; starting from the back, I read each page and concentrate on dialogue. Is this really how this character talks? Would he or she say use these words? Does it sound like real speech? Reading it out loud can be essential at this point.

The fourth revision is done with my critique group. We meet every other week, and read bits of our books to each other, and offer critiques, and sometimes the group has a discussion over the critiques. This encompasses every aspect; structure, credibility, character development, dialogue, style, everything.

Fifth revision is done with the help of my beta readers. I get a group of people, usually between 4 and 8 of them, and send them my manuscript via email or print it for them. I give them instructions as to what to look for, and they come back with an annotated version of the manuscript with all of their comments inside.

When all those are done, I give it a little rest and then read it through once more, trying to catch anything I missed. Then I send it out for submission.

I’d like to say that it’s over then, but of course, there’s the copy editors from the publishers who send you more corrections you have to do.

What was the most challenging part about writing Brothers in Arms?

Editing it. I wrote the original draft of this book the first time I attempted the 3-day-novel. I had a newborn back then, and I lost a day entertaining guests, so I wrote the whole thing over a little more than two days with interruption. Thank goodness for rigorous planning! But the editing was still a nightmare. I don’t think I worked so long on a book after I had written it, but you can imagine how much work it needed after being written over two days.

I’m aiming for at least 3 new first drafts and 3 first drafts revised and beta-reader and critique-group approved. So far, I’m on track, with 1 final draft thoroughly revised, approved by my critique group and sent off to beta readers, one going through its 6th rewrite/revision which is looking like the final touches, and one first draft halfway written.

Are you working on something at the moment? If so, can you tell us more about it?

I’m always working on something! Right now, Kindred Spirits, the sequel to Brothers In Arms, is undergoing the final revision process (it’s the one where I’m going through the 6th revision) and should be ready to send to the publisher in just a few weeks. The next volume of the series is halfway written as well. I’ve also got a fantasy trilogy set in a world I’ve been building for the better part of the last decade, and I’m finally getting around to it; volume 1 has already undergone two rewrites and is currently in the hands of my beta readers, and volume two is at least a third of the way into the first draft. Other than that, I have 12 other books at various stages of planning/pre-writing/drafting/revising in my project manager, and I’m hoping to get to at least two more this year. 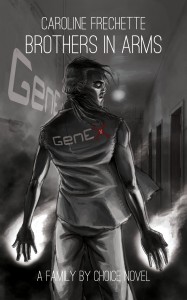 Am I losing my mind, or my power? Right now, I’m not sure which would be worse.

A little over a year after the events of Blood Relations, Alex Winters is doing well, with a relatively comfortable home life with his girlfriend and baby. Although his position as underboss for the Lupino group is starting to weigh on him, he truly thinks the most difficult times of his life are behind him. When he is approached by GenEx, and discovers that there are others with special abilities like him, he finds out just how wrong he is. 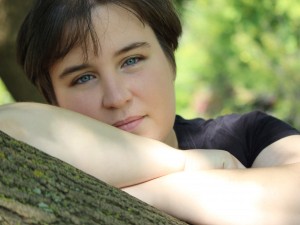 Caroline Fréchette is a sequential artist and author. She has published several short stories, both sequential and traditional, as well as two graphic novels, all on the French Canadian and European markets. She was the editor and director for the French Canadian literary magazine Histoires à boire debout, and works in a library. She has been teaching creative writing since 2005, and manages the writing page Ice Cream for Zombies.