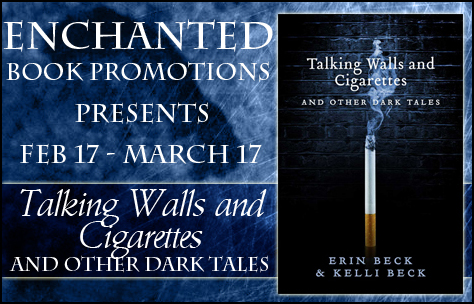 I’m interviewing Kelli Beck and Erin Beck today, the writing duo behind “Talking Walls and Cigarettes (And Other Dark Tales)”, a horror short story anthology. Welcome to my blog, Kelli and Erin, and thanks for answering my questions.

Erin: I’ve been writing since I was twelve years old.  I can’t say for sure that’s when I knew I wanted to be a writer, but it is when my passion began.  I probably knew for sure when I was in high school.

Kelli: When I was eleven. My teacher graded a short story of mine and in the margin of one of the pages she wrote “Nice Detail!” I don’t know why that one little scratch of the pen ignited the passion in me, but it did. I was always an avid reader so I guess it just made sense.

Where did you get the inspiration for Talking Walls and Cigarettes (And Other Dark Tales)?

We each had a story or two on hand.  We both have been fans of the horror genre for a number of years.  I guess the inspiration for the entire collection came for our love for the genre.  The inspiration for my story Homecoming came from my irrational fear of aliens.  I’ve read Whitley Strieber’s Communion and Transformation and the idea of creatures coming for me in the middle of the night utterly terrifies me.

Since we edited the anthology ourselves, the process mainly consisted of reading and rereading our own stories and each others.  The beauty of our friendship is that we can really critique and criticize each other’s stories without getting offended.   A few of our stories were also looked over by our friend and fellow author, Jacob Donley, whose critiques were always extraordinarily helpful.

What was the most challenging part about writing this anthology?

Erin: Two of the three stories I have in the anthology were written quite some time ago.  The challenging part with them was revamping them so they were worthy of being read.  Homecoming was written specifically for this anthology and it was a challenge just to dive into the idea of the story and think about that which frightens me.

Kelli: I had a terrible time with the story Porcelain. I originally wrote it in high school as a fairy tale and over the years it evolved. I tried making it into a novel three times and quit by page 40. I had set the story aside for a couple years when the idea finally hit me to make it a dark fairy tale. I wrote it in a couple hours and then spent awhile editing it. I’m happy with the outcome of it now and I’m glad that I was patient and set it aside for as long as I did.

Erin: My main goal for 2014 is to get to work on our full-length novel.  We have pages upon pages to sift through.  I feel we have something really great with Grabappleberry Punch, we just have to make a few tweeks.

Kelli: I’m excited about working on Grabappleberry Punch as well. I’ve never had more fun writing than with that story.

Erin: Right now I’m not working on anything in particular.  I’ve been in school and it     takes up a lot of my time.  But I would really like to try my hand at some more humorous    writing.   I hope have scared and disturbed some readers with Talking Walls, but I would really love to make people laugh.

Kelli: I plan on releasing my humorous novelette this summer and hope to be done rewriting my satirical novel about Midwest shenanigans so I can release it early next year. I love reading and writing horror stories but humor is a lot more fun. My editor said I have a voice for satire so I’m hoping to build on that. 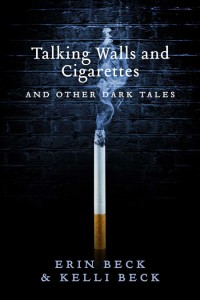 Title: Talking Walls and Cigarettes (And Other Dark Tales)

Talking Walls and Cigarettes is a collection of seven dark short stories that deals with both real life monsters and those that dwell within us. A bartender still grieving the tragic death of her brother, shunning from her family, and the whispers in the street is visited by a man who appears out of thin air to offer her a way out of her own personal hell in The Salesman. A poor family is cursed by a mysterious old man in the woods and the children are at risk for falling victim to their parent’s unspeakable acts in Porcelain. The title story follows a man as he is tormented by demons in his own mind. In Homecoming, can a young woman find what she’s looking for years after her father’s abduction by other-worldly beings?

Erin Beck was born and raised on the mean streets of Chatsworth Illinois.  Every day was a struggle to survive, to overcome, to persevere.  At the age of twelve, she took up writing.  This passion for the written word saved her from such fates as teen pregnancy and tooth decay, that which have befallen many other great Chastworthians.  Erin is also the author of The Pursuit of Hair and co-author of Grabappleberry Punch: The Adventures of Mister Tennison Volumes One and Two.  Her influences include Kurt Vonnegut, Stephen King, and Christopher Moore.  Erin spends her leisure time tossing a ball around with her dogs and parasailing, and has on more than one occasion been caught napping in a box full of packing peanuts.  She is a drop-out of Hogwarts where she majored in English and minored in the contortion arts.  She has scaled the dark tower; she has trekked through middle earth; and she thinks cannibalism is a real hoot.  Erin now lives in the woods with her boyfriend and survives off of insects and pine needles.  She wrote portions of this short fiction collection on homemade paper and her own blood. 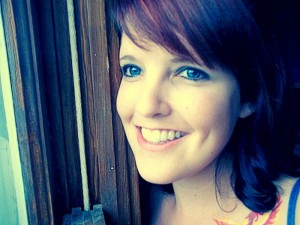 When she is not gold mining or globetrotting with her husband, Kelli spends her time writing, reading, and playing with her two dogs. Often described as “worldly” and “well-traveled,” Kelli is envied amongst co-workers and friends alike. She has a knack for reading minds and can often predict the future. Many people worldwide come to her for financial advice and money as she is the sole proprietor of the only money tree in existence. Her heroes include her father, Stephen King, and Albus Dumbledore. She has read the Harry Potter series many times over and is proud to share her birthday with The Chosen One. She has been described as a fearless leader, charismatic, even bulletproof.