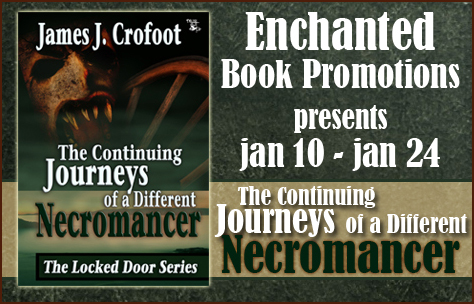 I’m hosting an interview today with James J. Crofoot, author of fantasy novel “The Continuing Journeys of a Different Necromancer”. Welcome to my blog, James, and thanks for responding to my questions!

I think the first time I actually put a name to it would probably be about ’95. But even then it was still a leisurely thing. I submitted one story and then the cares of life got in the way.  I didn’t really start actively seeking publishing my stories until about three years ago.

Where did you get the inspiration for The Continuing Journeys of a Different Necromancer?

I can’t really recall this one in particular, which is unusual. I have ideas all the time though. Just walking down the street, I’ll see a fence and think of just so many what ifs. This is a constant thing, all the time really, to the point of carrying around a notepad and pen to get the thoughts down. For instance, when I was much younger, pre-teen, I saw a small hole in a snow bank and wondered what it would be like to be half an inch tall and carry a laser rifle around in those tiny ice caves.

Re-write, re-write. I start with just getting it down on paper (never let them see the first draft) and then I use a different color pen to go back and make notes, change words, add or cross out as much as whole sections. After about three or four drafts, I turn it over to a professional editor. Currently, this is a very cool older lady in England who is a fellow author herself.

What was the most challenging part about writing The Continuing Journeys of a Different Necromancer?

This actually started as just a collection of short stories. Toward the end of this compilation, I really did have a bit of a difficulty in coming up with new plots, new antagonists. However, I wasn’t through with the characters so I asked a couple old friends who gave me a couple one line ideas. That was all it took. They even helped me come up with ideas that I’m still working on. I knew they would be happy to muse me, they always have.

Very simple. To write and publish more stories. To have people let me to help them escape from their lives for a minute. That’s a dream I hope to continue. Probably with some more schooling thrown in there as well.

Always, and trying to improve. I’m actually working on two, a short piece which is a sequel to another story I have published in an online magazine called ‘Silverblade’ in issue 20. ( Not sure if I can put that but I am promoting my work, right?) It’s about a fairy who learns to kill.

The second is my next book. It’s about a human earl who is forced to move with his Elvish wife to a city which is deeply set against his rule. There’s some politics, some goblins, some saber wielding and bola throwing cattle barons, and a thief.  I’m planning on getting it out by this summer. 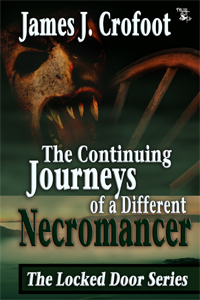 James J has travelled on sea and land, managing to get two degrees and has attended Gotham Writing Workshop. Through it all writing remained his first love. Now he is publishing his work for your enjoyment. ‘The Continuing Journeys of a Different Necromancer’ is the sequel to ‘The Journeys of a Different Necromancer’, both available at MuseItUp publishing, Amazon, Barnes & Noble and Smashswords. He has also appeared in Silverblade Magazine. For notice of further publications, like him on Facebook.