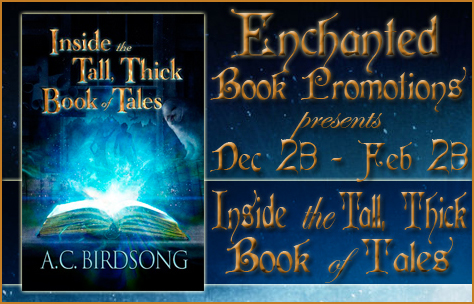 I’m interviewing A.C. Birdsong today, author of fantasy novel “Inside the Tall, Thick Book of Tales”. Welcome to my blog, and thansk for answering my questions!

Probably when I was 22. I was in the Army, and on a week-long 24 hours on / 24 hours off radio duty on Panama’s Caribbean side. For the previous 5 days I’d been living in a guard shack with nothing but my shift partner, a coffee maker, a rather silent field radio, and an old Smith Corona typewriter for documenting the very brief shift reports. Because there was no radio traffic (other than Radio Moscow, which oddly enough came in much clearer than my cohort stations less than half a mile up the jungle), and because my shift partner was spending a free day in town, I was drinking pot after pot of Maxwel House trying to stay awake. Sleeping on duty is frowned upon everywhere, and the bored staff officers tried to make a game of sneaking up on us, catching us asleep, and fining us $127. To pass the time on this particular night, I began typing page after page of stream of consciousness, mostly just drivel. I had the best time coming up with a story about Zelda and her axe handles. When my shift ended, I slept about 14 hours. When I got up, I read what I’d written and laughed out loud – I was so groggy I didn’t really remember writing any of it. But I decided then that it would be a great way to make a living. Especially if the coffee was free.

Where did you get the inspiration for Inside the Tall, Thick Book of Tales?

I’d been working as a civilian tech writer in Saudi Arabia for nearly eight months, but it didn’t work out. I had a choice: I could come back to the States and pay $8,000 in taxes, or I could stay out of the country and go in debt for about $4,000. I chose the obvious, and decided to spend my time in Greece. I’d never been in Greece before, and felt transported into a completely different dimension. Everything was different, and I loved it, but my experience in Saudi was still a sour taste in my mouth. I remember early on in my ‘exile’ at the Cafe do Brazil in Athens (which used to be right near the Tomb of the Unknown Soldier). I’m not sure what sequence of images, foreign language words, and music were happening at that moment, but I do remember being at the cafe and wondering, what would make someone trap another person in a magic book? What would it be like inside? How would the original story be affected? I’d spent the better part of the previous ten years wishing for a great block of time to write, and I started using it right then. I went right across the street, bought a thick orange notebook, and spent the rest of my expatriation touring Greece, looking for warm places to write, and working on the story. It was a cold year there, and I think all these things combined to shape the story.

How long did it take you to write Inside the Tall, Thick Book of Tales from start to finish?

The first draft was done with a pencil and completed over about six weeks time. The book languished for quite a while, and it wasn’t until I wrote a second book that I determined to go back and finish the first one. Over the course of about six months I made significant changes and additions. The realities of holding down a job and supporting a family drew out the actual time it took to start thinking about publishing. Publishing took a couple of months (it involved both print and eBook work). So all totaled, maybe a year. I wonder, if I’d been on long-term radio duty, could I have finished it in a couple weeks? I guess it depends on how much coffee was made available.

I usually have my story all mapped out before I start writing. When I picked <em>Inside the Tall, Thick Book of Tales</em> back up, I read it through, and wrote down every scene and chapter into parallel timelines. This let me see who was supposed to be where, what they were doing, and when they might discover the next thing. It also let me discover the many gaping holes in the story. It took a few weeks before I had a story outline that I liked. Next I hammered out the text of the story, not even stopping for typos (I turn the proofing tools off at this point), until I had a complete draft. After that it was reading and polishing with proofing tools on – probably six or seven runs – where I really got to know my characters. When I was satisfied there were absolutely no errors, and the manuscript was perfect in every conceivable way, I hired a professional editor. Then the work really began :).

I have no shortage of ideas, and when I’m settled in front of my laptop I have no writer’s block. But there are two things that always seem to stand in my way. The first is Time, and never having enough of it. If I had my own Earl of Southampton, and was able to spend the bulk of my days and nights writing, I’d likely be pumping out a novel every other month. But I don’t, and won’t, so I have to eke out the time slots where I can. The second challenge is getting back into the mental state I was in when I last finished a writing session. Having scenes mapped out helps, as does finishing a chapter at every sitting. But there are some times when you can’t be interrupted, call it a Coleridge moment, and if you are, the whole things suffers. I’ve deleted entire chapters because of this.

In 2014, I’d like to sell 1,000 copies of Inside the Tall, Thick Book of Tales, and get 30 solid impartial reviews between Amazon.com and Goodreads. Also, as I mentioned already, I have another book completely drafted and have put it through a couple of polishing runs. I’d like to get that to press. Finally, I have two ideas for sequels to Inside the Tall, Thick Book of Tales, and would like to work out the full storylines for both. I’m considering taking a month or six weeks off to do that.

Last spring I wrote a book that I’ve code named Derek One, a near-future mystery that centers on a disgraced rookie cop who’s been ostracized from the work he loves, and is handed a boon – with strings. His world is a mix of high technology and no tech, poverty and opulence, workplace harassment by private cops, off work harassment by tax cops, and small time kingpin wannabees. In this environment he needs to investigate a closed murder case and search for a person who’s not really missing. I like the story, and hope to have it out before the end of spring. 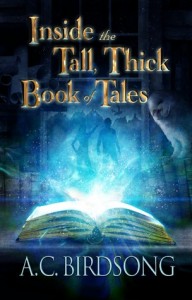 Title: Inside the Tall, Thick Book of Tales

On a small farm just outside of a tiny town lives Jacob, the last in a long line of Caretakers of Magic. His mission in life as the world’s only magician (in fact the only person who knows magic is possible) is to preserve magical skill in preparation for the day when magic is needed in the world. Other than what is required to train an apprentice, Caretakers aren’t to be practitioners, a tenet Jacob adheres to religiously.

Jacob has been teaching an apprentice, Palmer, for eight years. As a student, Palmer is a dismal failure, but this does not stop him from experimenting. Feeling that the pace of his instruction is unnecessarily slow, Palmer takes the little magic he knows, twists it, and uses it to trap Jacob and a young neighbor Lucy inside an old book of fairy tales (The Tall, Thick Book of Tales). Palmer refuses to release them unless Jacob imparts all magical knowledge to him in an instantaneous way.

From the moment of Jacob’s entrapment, Birdsong creates three interwoven storylines: Palmer’s dealings with the townspeople, who are searching for Lucy and quickly suspect Palmer for her disappearance; Jacob’s journey to escape, which takes him through scenes written into the book by Palmer, designed to harass Jacob and to speed his compliance along; and Lucy’s interaction with the book’s original characters, all magical themselves, trapped within the margins by Palmer’s spell, and are united in their desire to expel the intruders. Added to this mix are an enchanted bookworm and the fairy tales’ narrator, who have objectives of their own.

Readers will enjoy Inside the Tall, Thick Book of Tales. Birdsong skillfully mixes the real and the imaginary worlds with a lean and fast-paced style. A well-crafted and fun novel with colorful characters and great dialogue written for any fan of adult fiction, and suitable for young adults and older adolescents as well. 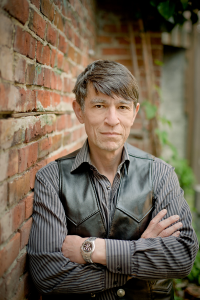 A.C. Birdsong wrote the first draft of Inside the Tall, Thick Book of Tales during an unseasonably cold winter in Athens, Greece. “I spent all my time either writing the story or searching for a reasonably warm and cheap place to write it. Often this left me huddled near tepid steam heaters in dingy hotel rooms, and drinking endless cups of weak Nes to fight the cold. Eventually the weather turned, which was not only fortunate for me, but for Jacob and Palmer as well, because they probably would still be fighting it out inside that book otherwise.”

A.C. lives in Seattle, where people voluntarily allow themselves to be trapped in books on a regular basis. This is his first novel.