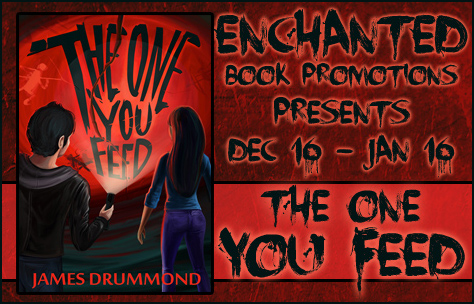 I’m hosting an interview with James Drummond, the author of young adult supernatural horror novel “The One You Feed”. Thanks for answering my questions, James!

I remember writing stories when I was very young that my mom would rewrite in far more legible handwriting. I’d then draw accompanying illustrations of wizards, knights, and dragons on the pages she left blank. I loved dreaming up stories, and still do. My day job involves writing, and I wrote for newspapers for a bit, but I didn’t really decide to become an author until about three years ago. The option to self-publish had a lot to do with that decision.

Where did you get the inspiration for The One You Feed?

I have always been a fan of horror stories and scary movies. Watching or reading these stories as often as I do, I can’t help but imagine different ways they could play out. What if the monster had appeared at a different moment? What would the hero have done? What if a certain action had been taken in Act II instead of Act III? So many people have taken popular creatures and attempted to tell their own tales involving vampires, werewolves, witches, and demons. Some I’ve rushed to read or see and greatly enjoyed, others not so much. When I decided I wanted to write my first book, I decided I wanted to try writing a series using these creatures and see what I could come up with.

I write 2-3 drafts of the book before I pass it on to a select group of readers (friends). That round of reading is more for general feedback, but the readers do usually find some grammatical stuff as well. I wait until I get everyone’s feedback before I dive back in, and that usually leads to me finding some stuff as well with a fresh set of eyes. Finally, I use a professional editor for a final proofreading.

This is probably an answer you get a lot, but it’s finding the time to write. I know people who churn out 3-4 books a year and I just don’t know how they do it. Between work, spending time with my girlfriend and two cats, seeing me friends, keeping up with other hobbies, and occasionally reading someone else’s work, I’m lucky to carve out an hour a day. I’ve never been good at sitting down and forcing myself to write. Whenever I’ve tried that, the stuff I write is mostly done away with the next time I sit down and read it over. I’m not the most disciplined writer. It’s something I need to work on.

To finish the 3rd book in my horror series.

The third book in my horror series. I’m finally getting around to vampires, who are basically holding a small, northern Scottish town hostage so that they can stop running from the hunters chasing them. Living in a world that provides such easy access to cameras and other techniques for verifying that things that used to be considered legend might actually be real, the vamps have chosen to settle in this town to live their lives as normally as possible without being concerned about who or what might be watching. The residents of the town aren’t too thrilled with this arrangement.

The One You Feed 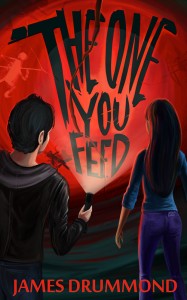 Title: The One You Feed

Like most kids who grew up in the small Oregon town of Silver Falls, Toby Hoffman had heard all the scary stories about the monsters living in the neighboring woods of the Umatilla Indian Reservation. Now a teenager, he knows the stories are made up to keep the town’s children from wandering where they aren’t wanted.

Then his best friend, Nate, wakes up covered in blood in the reservation woods, with no recollection of whose blood it is or where it came from. When even more brutal attacks follow, Toby can’t help but wonder if one of the fables he was told as a child might be true. With the help of Rachel, a determined Native American girl who has moved off the reservation and into the house next door, he begins searching for an explanation for the recent carnage. He also develops feelings for his new neighbor, which are put to the test when he and Rachel discover that her uncle may be responsible for the emergence of a legendary monster that does in fact exist.

To make matters worse, there’s evidence that Nate was turned by the beast, and that he has every intention of holding onto his extraordinary new creature capabilities no matter the cost. In order to save Silver Falls from a true scary story, Toby will have to face off against forces he doesn’t fully understand – and his closest friend. 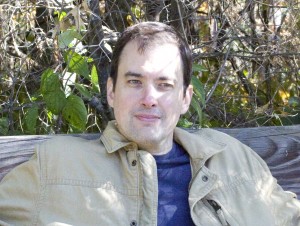 James is the author of The One You Feed and Something Wiccan – the first two books of the Out of the Dark series. He lives in Chicago, Illinois with his girlfriend Angela and two cats named Tim and Ruby. During the day James is a Senior Instructional Designer for an e-learning development company, where he writes activities and scenarios to educate learners on a wide array of topics—from fast food to PTSD therapies. A Graphics Designer at the company, Wojtek Batko, designs the covers for James’ books.