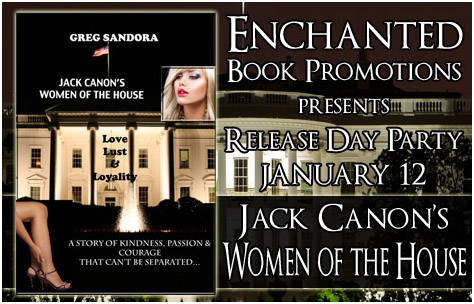 We’re celebrating the release day for “Jack Canon’s Women of the House” today, a political thriller, and the sequel to “Jack Canon’s American Destiny”.

Buy your own copy today:

About Jack Canon’s Women of the House 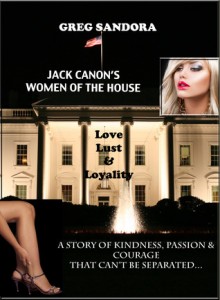 Two months have passed since the long awaited inauguration of the New President of the United States – Jack Canon. Now he must live up to his promises. The World is wounded, people are hurting, the new President must keep the country afloat. Jack leads a very full life – The first couple’s relationship is hot with passion, but he can never admit that to Sandy, his best friend who is also head over heels in love with him. The Women of the House provide a welcome distraction while helping with the arduous task of running the country.

As President Jack must make tough decisions: Global Terrorism, Human Trafficking, Korea on the brink of war, all while thwarting International Greed. Women of the House is a story of noble sacrifice at extremely high cost. Who’s going to be the first to be strong enough and willing to pay? It’s not all work in Women of the House – Think the Wedding of the Decade meets the Crime of the Century.

I’m originally from the Portland, Maine area and lived and worked there for years before moving to Southwest Florida. The sequel to Jack Canon’s American Destiny – titled Jack Canon’s Women of the House was just released. Think the Wedding of the Decade meets the Crime of the Century. It’s the Sexy, Romantic Thriller sequel to the original story.

My next project in the works involves angels – a man on a visit to Bar Harbor Maine encounters an angel; quite accidentally, she is not to make him aware of her existence. They go on an adventure to help innocent victims before a twist of fate happens that changes their destiny. The book is called Gabby, Angel of God. It’s a Supernatural Romantic Thriller.

Buy your copy of the book: