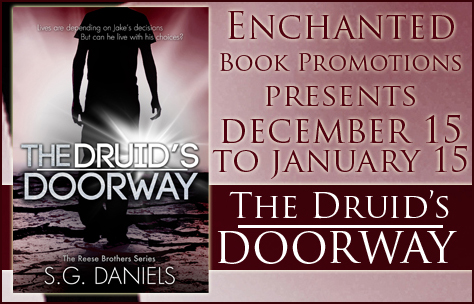 I’m interviewing S.G. Daniels today, author of YA urban fantasy novel “The Druid’s Doorway”. Welcome to my blog, and thanks for answering my questions!

After a palm-reader had told me I had a long author line, she asked if I wrote books or poetry. Go ahead and laugh, it’s okay. It does sound kooky, but it’s the truth. The reader told me things that were spot on, or so close I couldn’t dismiss the idea that she might be right about me writing too.

Where did you get the inspiration for The Druid’s Doorway?

The Robert Plant song, “Big Log” played on the radio one day, and it triggered the idea. A mini-movie began playing in my mind while the song was on, and I hurried after it was over to write down as much of it as I could remember.

Never having been through the editing process on this large of a scale until now, I had no idea what would work best for me. I ended up editing as I wrote each chapter. Yeah, I’ll be doing things differently on my future books. As I mentioned before, this was all new—live and learn.

What I ended up doing was reading it twice, and then used a text to voice program to listen. I had a team of dedicated beta readers I knew wouldn’t cut me any slack. I love them!  An awesome critiquing partner, and an amazing editor.

What was the most challenging part about writing The Druid’s Doorway?

I would have to say it was trying to come up with the blurb on the back cover! Haha, I wrote the entire book, and then had the hardest time trying to summarize it. After I found out I wasn’t the only one who had that issue, it made me feel a little better.

I have two books I want to publish in 2014. Book two of the Reese Brother Series, and a prequel novella.

The two books I mentioned are both partially completed. The prequel will be about Jake and Jessie’s mother, Darcy. So much of her story went untold in “The Druid’s Doorway” that I’m giving her a novella so she can tell us more about what happened before she died.

About The Druid’s Doorway 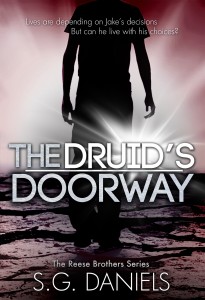 Jake Reese thinks he’s just a screwed-up high school kid living in a small town isolated in the Arizona desert. Traumatized at an early age by his mother’s sudden death—and believing he might have had something to do with it—he’s allowed his guilt and lack of self-confidence to rule his life.

Hailey is the fiery little redhead that sees Jake as more than a just a good friend. When she invites him as her date to a school function, it brings down the walls he’s built to protect his heart, and sets off a series of events that threaten not only Jake’s life, but that of everyone around him.

The discovery of a portal on the outskirts of town brings Jake face-to-face with death and reveals a closely guarded secret about his mother. No longer is his memory of her the only thing that haunts him. Something evil from her past has escaped through the portal, and nothing will prevent it from trying to steal Jake’s future.

Can Jake overcome his fears to keep Hailey safe? Will the decisions he’s forced to make destroy everyone he knows and loves? And ultimately…is he strong enough to live with those choices?

S.G. Daniels lives in rural Central Illinois with her husband of thirty-one years, and two spoiled cats, Payne and Jenks. She works full-time in a local medical facility as a patient accounting refund specialist. Most of her evenings she can be found in front of her computer, working on story ideas, or learning the ins and outs of the writing world. On the weekends, if she’s not spending time outside, she’s usually found nose-deep in a book. When S.G. unleashes her inner daredevil, she usually takes off through winding timber trails or country roads on the ATV. Her weaknesses are iced tea and pretzels, especially when she’s working on a story.