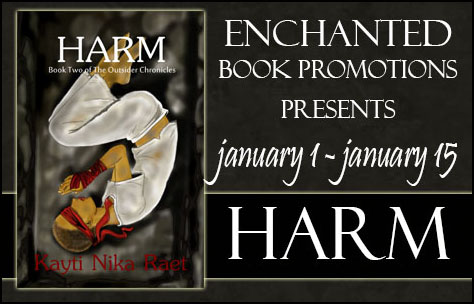 I’m hosting an interview today with Kayti Nika Raet, author of young adult dystopian thriller “Harm”. Welcome to my blog, Kayti, and thanks for answering my questions!

Where did you get the inspiration for Harm?

I knew as i was writing Niko, the first book in the Outsider Chronicles that i wanted it to be a five book series. So i already had a vague idea as to how Harm was going to turn out. It actually wound up being a lot different than i expected with some scene and characters totally surprising me.

After the first draft is complete I usually wait about a week then i read it through, anything i flinch at gets marked to scrap. Then i make note of the scenes i feel need to be stronger, or things that need to be switched around. I try to give myself a month to figure it all out. Then after the second draft is complete. I read it backwards to catch any spelling mistakes that spellcheck missed. Then i read it out loud to find any flow problems. After that i usually have it sit then read it again about a month later. It’s not foolproof and stuff gets added or changed as i learn more and grow as a writer but i’m pretty confident it it. (putting my Virgo tendencies to good use here. )

What was the most challenging part about writing Harm?

The fact that it’s a sequel. I think I scrapped and restarted it about three times, cursed it to the seven hells, picked it back up and said i didn’t mean it, you’re a lovely book bound to do great things. So it was a lot of stress overall but i think it wound up all right in the end.

To type up book three of the outsider chronicles (I write it longhand first, I know sooooo archaic), start Black Rose, book 4 in march (crosses fingers) and start Harmony, the last and final book some time in september/october. Maybe if I’m lucky I’ll be able to start on a new project. Wow! Looking at it now I’m going to be really busy this year.

Write now, I’m just typing up and rewriting Outsider which is the third book in the Outsider Chronicles. It starts up a couple of days after Harm left off, and focuses a little more on the relationships between all my lovely characters. Of course there’s explosions (what would a book be without explosions?), plots and plans, and general mayhem. . . you know, the usual 😉 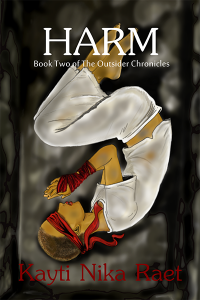 After a harrowing escape from Amaryllis City, Niko is forced to lay low. The people who want to use her unique genetics for their own ends are still out there and their reach is long.

After an emotional split with Ben and hiding deep in the slums she soon meets Songhay, a charismatic thief and his younger sister Roosevelt. Together they dodge violent gangs, roaming Slithers and the ever present threat of acid rain. Growing closer Niko along with Songhay soon form a rag-tag band of Slither hunters to keep the slums safe and the monsters at bay.

But then she discovers shocking information about her past that challenges everything she thought to be true about herself and those she loves.

Now she has to decide if she’d going to stay safe in hiding or stand up to the lies and injustice swarming around her.

She was never one to lie low for long.

Lies and truth collide in the second book of the Outsider Chronicles. 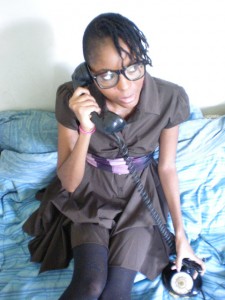 Originally from Brooklyn, New York, Kayti Nika Raet moved down South when she was 11 where she was bit by the writing bug as well as other less friendly insects. She the author of the YA dystopia, NIKO, as well as it’s upcoming sequel, HARM, and  the short stories SLITHER and TAPE THE DEVIL’S MOUTH.
Her procrastination aids are reading, K-pop, and photography.

Kayti lives in Milledgeville, Georgia. Visit her online at http://KNRwrites. tumblr.com, TheOutsiderChronicles.tumblr.com, on Facebook, Youtube (Kayti Edition), or email her at KNRwrites(at)gmail(dot)com.

Win an eBook copy of Niko and Harm. International.