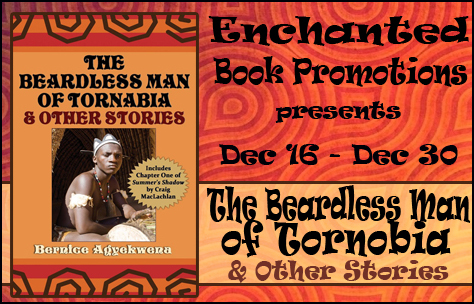 I’m interviewing Bernice Agyekwena today, author of african folklore / fairytales collection “The Beardless Man of Tornobia & Other Stories”. Thanks for answering my questions, Bernice, and welcome to my blog!

The idea of becoming an author took root in me quite early in life even though it was several years later before I could write my debut book. As a child in primary school who enjoyed reading a lot, I knew the books were written by people and I longed to belong to that class of people because they had brought so much joy into my life.

So in early childhood, I nurtured thoughts of writing books for children and by the time I was twelve years old, having made up my mind that I would like to write books one day, I  studied very hard to pass my common entrance examinations to further my education so I could achieve my dream. My big sisters who were then students used to talk a lot about the literature books they were studying in school and I could not wait to get there and also study literature.

2) Where did you get the inspiration for The Beardless Man of Tornabia & Other Stories?

My inspiration came from several sources since each of the twelve stories in the book was influenced by something different. The stories were influenced by a mixture of traditional and cultural beliefs, my experiences in life as well as the numerous books that I had read over the years, including folk tales and fairy tales and the famous Greek fables. In fact I still miss these Greek fables which are no longer around unlike the European fairy tales which are still on our bookshelves.

The first story from which the book takes its title, “The Beardless Man of Tornabia”, was inspired by the cultural belief that goats are evil, especially when reared on a large scale and there are numerous stories about goats talking to their owners,

In the same vein, “Adua and the Buffalo Princess”, another story in the collection was influenced by the widely held belief that buffalos are evil animals and normally try to challenge hunters when they go into the bush or forest to hunt them. Even cattle, especially, black ones, are considered an evil omen when they appear in one’s dreams and to dream of being attacked by a black cow would normally send most people panicking. It is interesting to note that the name for buffalo in most Ghanaian languages is bush cattle, indicating that they are considered to be the same in our culture.

And since the animals living in the bush and forests are believed to have spiritual powers to protect themselves from hunters, so it was also considered prudent for hunters to arm themselves to the teeth spiritually when going on a hunting expedition. This was not only to enable them to hunt the animals but also to defeat any evil spirits they might encounter whilst hunting since the bush and forests are also considered to be the abode of evil spirits. So such beliefs culminated in the creation of the character “Adua”, a hunter who relied on spiritual powers to hunt animals.

“Kachana and the Magic Silk Cotton Tree” was also inspired by the traditional belief that certain trees are imbued with spiritual powers. These kind of trees, according to our cultural beliefs, can even assume human forms and approach human beings; usually asking for some form of material assistance and tend to punish those who refuse to assist them. I can remember my late mother recounting stories she had been told  about how people escaping desperate situations, such as ethnic wars in the past, called on trees to open their trunks for them to escape into them and they did. According to my mother, these people forever remained prisoners of the trees that offered them refuge and could not go back home even after the wars were over.

In addition, a legend about an existing pond in a town called Paga in Ghana which is a major tourist attraction because people go there to view its friendly crocodiles, take pictures with them, touch them, with some  even daring to sit on them influenced a section of the story about “The Crocodile and the Land of the Giants”.  Even the terrain around this place which consists of huge boulders, rocks and stones also formed an important part of the plot.

A portion of “Kalinsi and Keleesa, the Monster Spider” was influenced by one of Shakespeare’s plays, “Macbeth”. Just as the three witches in Macbeth all relied on one eye to see so the “Wise Wrinkled Witches” in this story also relied on one arm to perform all their duties for them. The rest is taken over by cultural practices like smearing sheabutter on one’s body to protect it during the harsh hammattan season characteristic of the savannah climate in West Africa. According to traditional beliefs, certain geographical phenomena, such as whirlwinds harbour evil spirits. Hence, when there is a whirlwind, it is customary for people to chant certain words to scare away the evil being residing in the whirlwind. It is also a widely held belief that throwing an egg inside the whirlwind would reveal the identity of the being residing in it. All these beliefs found their way into the plot of this story.

A friend of mine who read this particular story said it reminded him of “The Head of Medusa” but I certainly was not  thinking about “The Head of Medusa” when I wrote this story even though I read it as a child and it was one of my favourite Greek fables, In this case, the influence could have been covert.

And yes, even my cat became an inspiration for me which culminated in my writing the story, “The Poor Widow and Tiabu, the Talking Cat”. I later read an article which said pets are a big inspiration for authors so perhaps I should think of keeping more pets.

I tend to edit my stories as I write them. I believe this is a carry-over from my career as a journalist, where it is necessary to present your best copy to your editor. Hence, when under inspiration to pen down a story, I write as fast as I can while under inspiration, not wanting to lose any insights but as soon as the inspiration is over, I go over what I have written, correcting it for both grammar and content, Then after I have written down everything I would go over the story again, once again editing it for grammar, content, consistency and making sure that every paragraph contributes something to the story.

4) What was the most challenging part about writing your book?

I actually faced very few challenges while writing this book. The stories just flowed and it was as if my mind was pregnant with stories and very anxious to let all of them out. In addition, I wrote the book at a time when I was freelancing as a journalist and there was no restriction on when and where I could write. Hence, anytime I wanted to write, I simply wrote.

My writing goals for 2014 are a carryover from 2013, which I could not finish because I was involved in a lot of online courses and also got a permanent job last August. So for the year 2014 I hope to finish my second collection of African fairy tales and make progress on a novel I am developing.

Right now, my concentration is on my second collection of original African fairytales. This time, I have included a story on mermaids because mermaids feature a lot in our cultural beliefs and the storyline is about three mermaid sisters who fall in love with the world of humans and make an attempt to come and live in the world. The story revolves around how they entered the world of humans, the kinds of activities they carried out and how they finally exited the world.

There is also another story about a fisherman from a fishing village who went fishing with his son and his son got missing at sea during a storm. The story revolves around how the fisherman journeys into the sea world to ask for his son back as well as the ordeals that he and his son went through to regain their freedom from their captors.

So this new collection would feature stories related to the sea and coastal areas of Ghana and other scenarios’ which were not featured in “The Beardless Man of Tornabia and Other Stories”. 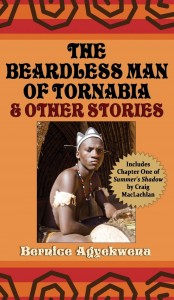 Title: The Beardless Man of Tornabia and other stories

In the grand storytelling tradition of ‘One Thousand and One Nights’ comes “The Beardless Man of Tornabia & Other Stories” by Bernice Agyekwena.

‘The Beardless Man of Tornabia & Other Stories’ is a collection of original African fairy tales rooted in the traditional beliefs, practices, myths and cultural practices of the peoples of Africa. It shares the same characteristics with traditional fairytales from all over the world. These include common themes such as an ordinary girl getting married to a personage of royalty, deprived children finding a benefactor, as well as tales examining the eternal battle between right and wrong, good and evil.

So, re-discover Africa with this vivid and exciting collection of unique African fairy tales, deeply rooted in African myths, folklore and cultural traditions, with the very talented Bernice Agyekwena in her stunning debut work for children and adults of all ages. 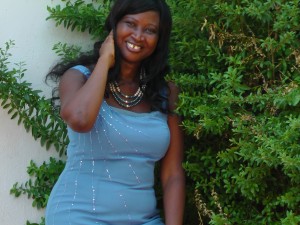 Born in Ghana, Bernice Agyekwena attended the Ghana Institute of Journalism from where she graduated with a Diploma in Journalism. She later joined the Ghana News Agency after her National Service in 1991 where she covered issues ranging from politics, health, economics and agriculture to issues on the environment, climate change, culture and human rights. Bernice also holds a Masters Degree in Social Communication from the Pontifical Gregorian University in Rome and a Bachelors Degree in Social Science from the same university.

‘The Beardless Man of Tornabia & Other Stories’ is Bernice Agyekwena’s first published work.