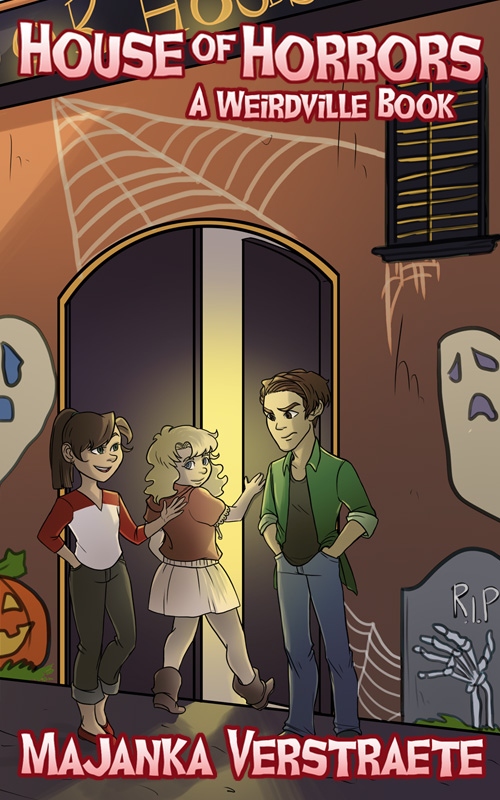 An excerpt from House of Horrors

My chapter book, “House of Horrors” released this Monday. I wanted to share an excerpt from the book with you all. Hope you enjoy it!

Jacky stared at the newspaper her dad clutched in his hands. He was reading the sports section, but she was more interested in the ad section turned toward her. A giant picture of a traveling fair was flaunted on the newspaper, taking up half a page in a myriad of colors, a stark contrast to the grey background of the newspaper.

Mystica Fair, coming to Weirdville on May 10th-12th, the headline read. Most of the rides on the picture were too blurry to make out, but she recognized a Tilt-a-Whirl and a Ferris Wheel pictured in the background.

Mom glanced over her shoulder to look at her. “Jacky, I’m busy,” she said, focusing back on the eggs in the frying pan, as if they were somehow more important than Jacky.

That made no sense, because they were eggs, and who cared about eggs? Jacky didn’t even like eggs.

But Dad did. He hadn’t moved, just kept on reading the sports page as if it were the most interesting thing in the world. Jacky sighed and slumped back in her chair, giving up.

About five minutes later, Mom dumped the fried eggs on Jacky’s plate. “Now, what were you saying, sweetheart?”

“There will be a carnival in town next weekend,” Jacky tried again. “Can I go?”

Dad chose this moment to turn the newspaper around and look at the article about the carnival. He wiggled his nose, which Jacky took as a bad sign. He always did that when he disapproved of something.

He was all about safety: always wear your helmet when you’re riding a bike, never get into a car with strangers, look left and right before you cross the street. It was hard to keep track of all his rules.

“It’s in the town square,” Jacky said. “A five minute walk, tops.” She gave her Mom her best puppy-eyes look, but Mom ignored her.

“I suppose we could go.” Dad lifted his coffee mug and stopped right before taking a sip from it. “To keep an eye on you.”

“Daaaaaaad.” Jacky rolled her eyes. “My friends already think I’m spoiled because you babysit me everywhere I go.” She sighed and fell back into her chair.

“Don’t talk to your Dad like that,” Mom snapped at her.

“It’s all right.” He set his coffee mug down and rested a hand on Mom’s arm. “Jacky has a point, and it’s only in the town square, after all. Aunt Beth lives right next door.”

“Hmm.” Mom looked from Dad to Jacky and back again. She bit her lip and ruffled a hand through her hair. “Very well, then. Looks like I’m on the losing side.”

“You can go on Saturday afternoon, in broad daylight, and you’ll be back by dinner time,” Dad said in one breath. “If something happens, you rush straight to Aunt Beth’s house, you hear?”

“Yes. I promise.” She nodded her head, to reinforce for her parents that she’d keep her promise.

“And you’re not going on your own,” he added. “Safety in numbers.”

“Of course.” By now, Jacky would agree to anything to be able to go to the fair, but she hadn’t planned on going alone, either way. What was the fun in that?

“Good. Then you’re allowed to go.” He gave Jacky one of his rare smiles, and she returned the gesture, a broad smile that reached from one ear to the other.

Jacky wiggled her nose, an imitation of her Dad’s nose-wiggling whenever he disapproved of something, but she didn’t protest.

Two more days until she’d get to go to the fair. Even the eggs tasted less horrible than usual when she thought about that.

About House of Horrors