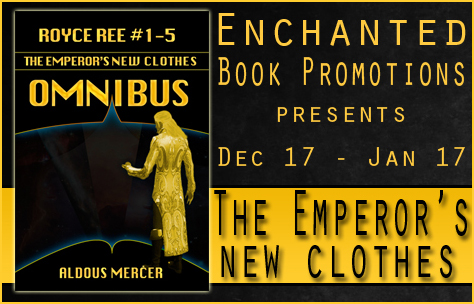 I’m hosting a character interview today! This time with Royce Ree, the main character of “The Emperor’s New Clothes”, a science fiction M/M romance novel by author Aldous Mercer. Thanks for answering my questions, Royce Ree!

1) Please tell us all there is to know about you! Well, keep it short though. 😉
Royce Ree, Imperial Agent, 27-standard-years old, divorced, specializing in covert and combat ops. Nice to meet you etc., but I don’t like being interrogated, so like you said, let’s keep this short and sweet–maybe we’ll get out of it with our dignity intact…

Best friend? A few years ago, I’d have said my husband. But a friend’s someone you can count on, someone you know the ins and outs of, and my ex is as incomprehensible to me as a 5-dimensional quantum wormhole.
My ballistic (gun, to you Earth folks) has been restored to its “best friend” pedestal.
Nemesis? The same force that is antithesis and adversary to all right-thinking people everywhere: Government Bureaucracy. It doesn’t get any better even when the guy on top is an absolute dictator. Forms and red tape, and “Royce Ree, we need to give you sensitivity training again, you *can’t* call an Intergalactic Dignitary a “plasma-zit-faced piece of grrash’ in public”.

3) What is your number one pet peeve?

See Question 2(b) above.

4) If you could choose one holiday destination, what would it be?

Plostroon V. Best salt-water taffy this side of the ‘verse.

Um. Please and goodwill for all planets? Collecting *all* the Pokemon? Seriously, I’m Royce Ree. I don’t have goals, I have mission objectives. The Emperor has not seen fit to assign me an “ultimate objective” as of yet…it’ll be my last undertaking, when he does. I’ll go out with a bang; he owes me that.

Imperial Agent Royce Ree needs to pull off the biggest heist the Universe has ever seen, or it’s bye-bye cushy government job, hello cleaning toilets in a dive-bar on Baga-V.

To succeed, he will need help from the last person he’d ever ask: his ex.

Royce has a simple mission: steal some tech from the newly-discovered civilization of Baldessh. But Royce thinks HQ’s mission specifications are utterly stupid. So he disobeys a direct order, and goes to steal the tech his own way.

“The Empire has survived wars, supernovae, democracy, and the collapse of a neighborhood universe. Let us hope it survives the good intentions of Agent Royce Ree.”
– Author unknown (personal communication to the Emperor)

Royce’s primary mission has been abandoned in the chaos of Baldessh’s hostile takeover by a third party. Now his only objective is to get himself, and his fellow “agent” off-planet as fast as possible. Unfortunately for Royce, nobody is quite ready for him to leave just yet.

“”I find it curious that the agent was not rescued before the comms-blockade, Spymaster.”
“Imperial Intelligence is not in a habit of rescuing AWOL agents, Councillor. Apprehend and prosecute, yes, but not rescue.”
“I suppose both of us must wait. For…evidence.”
“Would you mind waiting somewhere other than my office? Only, we can’t all be Councillors, Councillor, and I have real work to do.”
-Conversation, Imperial Intelligence Headquarters, Trinity Prime

THE GORILLA IN THE VENTS: PART 3

Royce now has three days to rescue 40,000 space marines, and he’s just been told that the tech he came to Baldessh for doesn’t actually exist. He also has some real problems—his co-agent’s time is running out, and somewhere, far away, traitors are plotting to start a war that will engulf the entire Universe in flames.

Hope, however, can sometimes be found in the darkest of places. Like ventilation ducts.

“ “Every pre-FTL civilization we know of has alcohol. I mean, imagine being stuck to a single planet, wasting decades just crossing your own solar system! Who wouldn’t invent vodka?”
-Gaste Trade Cartel Sales Representative (Conversation overheard at spaceport dive-bar, Gomo-Prime)

Royce has been betrayed, Baldessh’s burgeoning rebellion is going to be crushed, and all the animals are going to be exterminated. But Royce is smiling. Because Royce, like always, has a Plan.

It looks like things are going to be OK for everyone except Royce and his ex. Looks can be deceiving—there are plots within plots, and Royce’s true test awaits him at the edge of Imperial Space.

“ “I’m sorry, sir, your payment didn’t go through.”
“What! Why?”
“There is a hold on your accounts, pending a Deadbeat Investigation.”
“I’m the Procurement Officer for the entire Kovan Fleet, woman!”
“Yes, sir, I recognized your uniform. But I’m afraid your job description has nothing to do with this conversation.”
“The hell it doesn’t! What are my soldiers going to do if you don’t sell to us?”
“Respectfully, sir, that’s not my problem.”
“We’re in the middle of an invasion!”
“I’m very sorry to hear that. Perhaps your soldiers could target a facility that manufactures the toilet paper you need?”
–Transcript, Kovan Flagship: “Comms exchange between Fleet Procurement and Gaste Cartel Customer Service.”

A native of Toronto, Aldous Mercer enjoys martinis and relaxing on the beac-ha! No.

Aldous Mercer is a workaholic with a penchant for numerical mind games and caffeinated beverages. He uses his degree in Engineering to ensure that none of the spaceships in his books have cubic pressure-vessels. In real life he always annotates Engineering Drawings in Iambic Tetrameter.