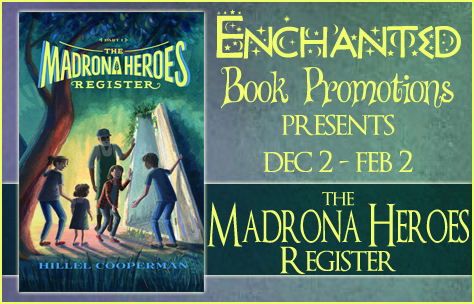 I’m interviewing Hillel Cooperman today, author of YA superhero fantasy novels “The Madrona Heroes Register”. Thanks for replying to my questions, Hillel, and welcome to my blog.

Honestly, I’m still not sure I want to be an author. It’s more like I felt compelled to tell this story. Being an author was just what I had to do to tell it. Maybe a couple of books down the road I’ll think of myself as more of an actual author. 🙂

Where did you get the inspiration for The Madrona Heroes Register?

The overall series is really about these three children (who resemble my own in only positive ways 🙂 Zach, Binny, and Cassie – siblings – who have to deal with the introduction of a superpower into their family.  Eventually, over the course of the books I intend to create a new superhero universe along the lines of DC or Marvel. But more importantly I gravitate towards more realistic superhero stories, and that’s really what I’m striving for here. What would actually happen if a seven-year-old suddenly had a superpower?

How long did it take you to write The Madrona Heroes Register from start to finish?

As I finished each chapter I read them to my ten-year-old daughter Bella. I knew if she was bored that the chapter was no good. Luckily that only happened a couple of times. After that the chapters went to my alpha readers who gave great feedback. And then finally, my ex edited the entire book from start to finish and did an awesome job.

What was the most challenging part about writing The Madrona Heroes Register?

I know it sounds dopey, but writing. It’s not a particularly enjoyable process. It’s an effort to pull something out that seems moderately non-terrible. I found that the only time I could really force myself to write was when the alternative (not creating this book) became more unbearable than the thought of sitting down and writing another chapter. Also, waiting months to get cohesive feedback on the book is hard.

My goal is to produce the next book in the Madrona Heroes Register Series. I’d be pretty happy with that.

I’m working on Book #5 in the Madrona Heroes Series (the second book to come out). The title hasn’t been announced yet. 🙂 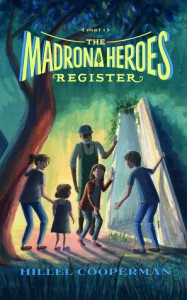 Someone in ten-year-old Binny Jordan’s family has a super power – and it’s not her. Binny’s seven-year-old sister Cassie can turn herself invisible and now a strange man is keenly interested in what Cassie can do. Binny’s parents seem more distracted than ever, and her older brother Zach is hiding something of his own. Binny needs to find a way to protect her sister, but she’s never felt more alone.

Hillel Cooperman has pretended to be a superhero since he was a small child. He conceived of the story of the Madrona Heroes in the summer of 2012 on a trip abroad with his family. By winter, he had started writing in earnest. He lives in the Madrona neighborhood of Seattle with his three children, their three cats, and thousands of Lego bricks. His superpower is procrastination. The Madrona Heroes Register is his first novel.