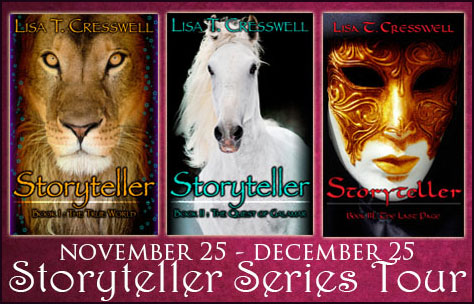 I’m interviewing author Lisa Cresswell today. She is the author of YA fantasy series, the “Storyteller” series. Thanks for answering my questions, Lisa.

I started reading to my own son and daughter when they were very young. Reading so many wonderful books with them made me want to pick up my own pen and give it a shot. I’d always written stories since I was a kid, but I didn’t get serious about getting published until my own kids inspired me.

Where did you get the inspiration for the Storyteller series?

It’s hard to remember, the project started so long ago now.  I had been reading some middle grade fantasy books with rather annoying main characters and I knew I could do better. I always start off with my character, my hero.  With Lily, I knew I wanted a strong female character who could dig deep to find the strength inside herself to save an entire world.  When I was writing the last book in the series, I became a Pinterest addict.  For fun, I created a board of pictures that inspired me as I wrote. You can check it out here: http://www.pinterest.com/peach83352/boards/

Oh boy! Well, it used to be kind of random, but I have a better plan now. I get out a calendar and I plan which chapters I’ll edit each week. I try for five chapters a week. Sometimes I make the goal; other times it takes longer.  I have a bad habit of over using words like “smile” and “look”, so I do a global check for those for sure.

Writing the books was a lot of fun. Probably the biggest challenge for me is always finding time to do the actual work of writing and editing. I have two kids with lots of activities and it’s a full time job!

Oh, there’s so much to do. I’ll continue to promote my published work, but I have another book to edit for a publisher and I have several potential projects I want to outline.  Not sure which manuscript I’ll start writing first. We’ll see which outline inspires me the most. J

Don’t laugh, but I’m working on a young adult, paranormal pirate/ghost story. I hope to have it ready for submission around New Year’s.  After that, I’ll be working on edits to my young adult science fiction tale, Vessel, that’s due out from Month9Books in early 2015. I think it might be my best novel yet and I can’t wait to share with readers.  Bookmark my web site and blog so you can watch for it! www.lisatcresswell.com 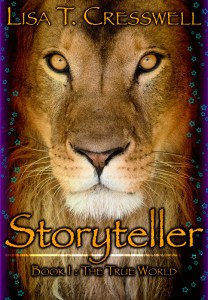 Storyteller Book I:  The True World

Lily Lightfoot can make weird things happen, just by telling a story. It’s a gift she can’t always control, making her the queen of seventh grade outcasts. She can’t make a million dollars appear out of thin air or make it rain cupcakes, but it’s not for lack of trying. More than anything, she wants to see her mom, who’s left her in the care of her unconventional grandmother, Gwendolyn, and her only friend, Peter.

When Lily finds a strange fairytale book, she’s drawn into a fantasy world where her mother waits for her. When her grandmother admits to Lily they are fairies, hiding in this world from dark forces in another place, Lily is convinced the book she’s been reading is real. According to the book, those dark forces now threaten to destroy her mother. What Lily doesn’t know is they are already hunting her as well. Despite the dire warnings of Gwendolyn and Peter, Lily embarks on a mission to find a way into the fantasy world to save her mom. The events she sets into motion with the telling of a story will change all of their lives forever. 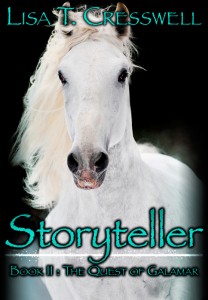 The second book in the Storyteller Series, “The Quest of Galamar”, continues the tale of Lily Lightfoot and her friends Peter Everheart and Heather Whipple.  Now that they’ve found their way into the True World, the friends must rely on the help of Lord Gabriel, an enchanted elf, now a manticore, to find Lily’s captured grandmother, Gwendolyn.

Gabriel sends the three friends to find the full moon amulet, hidden deep in the mountains and guarded by a fierce dragon.  The amulet, one of four moonstones created ages ago by the fabled elf warrior Galamar, holds the power of the Northern Portal keeper, Ironblood the dragon.  Whoever possesses all four amulets has the power to recreate or destroy the True World.  Gabriel’s brother, Lord Kane, will stop at nothing to have the ancient powers for himself and keep Lily from fulfilling the Prophecy of Galamar.

On their epic journey, Lily learns more about magic, friendship, the power of forgiveness and finding the strength we all possess inside. 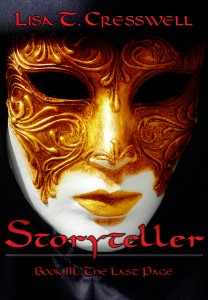 When her story began in Storyteller: The True World, Lily Lightfoot didn’t know she was a fairy with the power to make things happen, just by telling a story, but then everything changed. Now she’s on a quest to save the True World with only a few friends to help her. Her mother and her best friend captured, it’s up to Lily to complete the Quest of Galamar – a centuries old fairy tale.  All she has to do is figure out how to turn back time. Easy, right?

In Storyteller Book II: The Quest of Galamar, Gabriel sent the three friends to find the Full Moon Amulet, hidden deep in the mountains and guarded by a fierce dragon. The amulet, one of four moonstones created ages ago by the fabled elf warrior Galamar, holds the power of the Northern Portal keeper, Ironblood the dragon. Whoever possesses all four amulets has the power to recreate or destroy the True World. Gabriel’s brother, Lord Kane, will stop at nothing to have the ancient powers for himself and keep Lily from fulfilling the Prophecy of Galamar.

The amulet recovered, Lily loses her guardian and best friend in the process. The only way to save him is to face the remaining portal keepers, the Griffin and the Harpy, and Lord Kane himself. As the True World prepares for an epic battle, Lily races to find those she loves and fulfill the ancient quest before it’s too late. 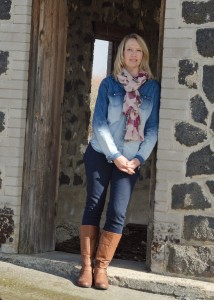 Lisa, like most writers, began scribbling silly notes, stories, and poems at a very young age.  Born in North Carolina, the South proved fertile ground to her imagination with its beautiful white sand beaches and red earth.  In fifth grade, she wrote, directed and starred in a play “The Queen of the Nile” at school, despite the fact that she is decidedly un-Egyptian looking.  Perhaps that’s why she went on to become a real life archaeologist?

Unexpectedly transplanted to Idaho as a teenager, Lisa learned to love the desert and the wide open skies out West.  This is where her interest in cultures, both ancient and living, really took root, and she became a Great Basin archaeologist. However, the itch to write never did leave for long.  Her first books became the middle grade fantasy trilogy, The Storyteller Series.  Her first traditionally published work, Hush Puppy, is coming soon from Featherweight Press.

Lisa still lives in Idaho with her family and a menagerie of furry critters that includes way too many llamas!

The Quest of Galamar links

Three lucky winners will each get a set of eBooks of the entire series. Fill in the Rafflecopter form to participate!
a Rafflecopter giveaway