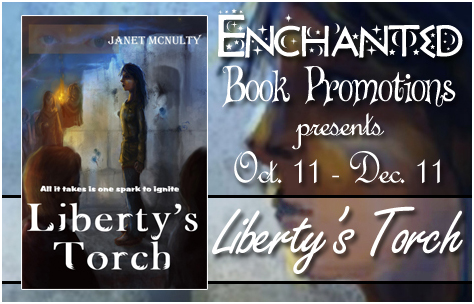 I’m interviewing Janet McNulty today on my blog. She is the author of a YA dystopian novel called “Liberty’s Torch”. Thank you for answering my questions, Janet.

Whine I was in high school I liked to write short stories. Most of them were garbage and I threw them away.  However, I liked telling stories.  Also during that time I had an idea for a fantasy novel and that was when I realized that I wanted to write.  Of course, I put it all on hold while I went through college and struggled to get a job, but my desire to write stories never waned.   About a year or two after college, I realized that I really wanted to be a published author.  So I finished up the book I had begun writing in high school and published it myself.  Now whenever  I get an idea for a book, I jot it down and save it.

2) Where did you get the inspiration for Liberty’s Torch?

I got the idea for the book from current news events.  I tried to keep politics out of it as I want Dana’s struggles to be the main focus.  However, I have come to realize that in our modern world everything we do is tracked and can easily be traced.  My concern is that personal privacy is being lost.  Also, it isn’t that hard for someone within the government, police, or even the kid down the street to look up every record of your life, copy it, or steal it.  How does this work in the world of Dystopia?  Every citizen has a chip implanted in their arm which tracks and records their movements.

When I came up with the idea of Dana’s character, I decided to take my concerns about privacy and wrap it all in an Orwellian landscape.  I happen to be a fan of his books anyway.  I believe that most people like to be left alone to live their life as they see fit.  Dana encompasses that.  She grew up in a world where her actions were controlled, but all she wants is to be left alone.

3) How long did it take you to write Liberty’s Torch from start to finish?

It took me about two to three months to finish Liberty’s Torch.  Two months for the actual writing and another three weeks of editing.  This was a project I wanted to make sure I had finished, so I buckled down and worked on it nonstop until it was done.

Before I begin editing, I usually put a finished manuscript away for a while.  I do this to distance myself from the story so that when I edit it, I can look upon it with a fresh perspective.  It really helps. Then I read through it line by line and decide if that sentence really belongs there.

5) What was the most challenging part about writing Liberty’s Troch?

Getting started.  Liberty’s Torch is the last book in a series.  But when I finished book 2 (Tempered Steel) I had changed the storyline a bit.  That meant that my outline for Liberty’s Torch was no longer of any use.  I ended up having to go back and reread the first two book before I could start he third.

My goals for 2014 is to publish another trilogy, that I am currently working one.  This one is called Solaris and is set in space.  I hope to have the first book out by spring, but that is still a tentative date.

Yes. I am working on another trilogy. I am currently writing a science fiction series.  It is more of a space opera, or an adventure story in space.  The basic storyline is that four people from earth—from different time periods—are transported from their home to an alien ship. Once there they learn that there is this weapon that can destroy entire solar systems and they are needed to stop it.  Okay, that is the general, and most basic storyline.  The series is called Solaris.  I hope to have the first book published in 2014. 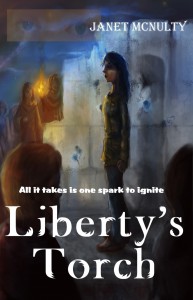 All it takes is one spark to ignite the flame of liberty.

Six months have passed since Dana and Kenny parted.  Forced to live as a wanderer, Dana discovers a crashed drone and learns of the chaos within Dystopia and what President Klens has planned for the resistance. Realizing that she must go back, Dana acquires the help of a seventy-year-old man and an old friend.  Upon her return, she finds that rebellion is in the air as the government continues to eliminate dissenters.

Forced to disguise herself, Dana searches for the resistance to tell them of President Klens’ plans.  After a few run-ins with the officers and narrow escapes from Colonel Fernau—his obsession with her growing each day—she learns that the people of Dystopia yearn to be free from their oppression.  What they need is a leader.  Knowing that everyone she cares for will never be safe so long as the government reigns supreme, Dana must decide how far she is willing to go achieve freedom.

Ms. McNulty began writing short stories at an early age. That passion continued through college until she published her first book: Legends Lost: Amborese under the pen name of Nova Rose. Since then she has gone on to publish a mystery series, children’s books, and even a dystopian series.

Recently, her grandmother was diagnosed with Alzheimer’s causing her to visit her grandparent’s and record her grandfather’s memoirs before they become lost. The final result is Grandpa’s Stories: The 20th Century as My Grandfather Lived It. She did this to preserve her family history before it becomes lost.

Ms. McNulty currently lives in West Virginia where she enjoys hiking, being outside, crocheting, or simply sitting around and doing nothing. She continues writing. She is finishing up her dystopian series (the second book, Tempered Steel, is to be published in August 2013 and the final one, Liberty’s Torch, in November 2013).

Sugar And Spice And Not So Nice
Frogs, Snails, And A Lot Of Wails
An Apple A Day Keeps Murder Away
Three Little Ghosts
Oh Holy Ghost
Where Trouble Roams
Two Ghosts Haunt A Grove
Trick Or Treat…Or Murder

Mr. Chili’s Chili
Mr. Chili Goes To School
Mr. Chili’s Halloween
Mr. Chili’s Christmas
The Hungry Washing Machine
Mrs. Duck And The Dragon
Rhymes-a-lot
How Do You Catch An Alien
Are You The Monster Under The Bed?

You can learn more about her and her writing at www.legendslosttrilogy.com
Follow her blog: http://booksandlegends.blogspot.com/