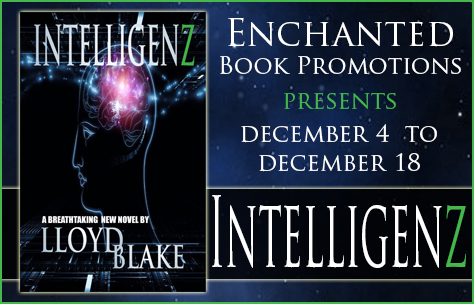 I’m interviewing Lloyd Blake today, the author of science-fiction novel “Intelligenz”. Thanks for answering my questions, Lloyd, and welcome to my blog!

When I was really young I always used to like sitting in my bedroom and reading a book out loud and enjoyed getting lost in a book. Growing up I always thought I had the potential to write and become an author, as I had written short stories in the past, but never acted on it – I think it was a confidence thing. It wasn’t until I read The Da Vinci code by Dan Brown that I decided hey I think I can do this, I can write something. I liked the pace of Dan Brown’s prose and the way he held my attention.

Where did you get the inspiration for Intelligenz?

I was inspired by our ever changing world. The technological revolution, if you can call it that, which seems to be taking over our lives. I’m old enough to remember when there was no internet, when we didn’t have music downloads, and wireless devices or social media. With Intelligenz I wanted to question what the next step is in our technological evolution. Would that journey be a smooth one or one fraught with danger. Just like today, our technology can be used for good or bad purposes and we don’t have all the answers yet to solve them, particularly surrounding the internet. Intelligenz seeks to highlight where we could go wrong if safe guards are not put in place and how a new form of technology can potentially be abused.

How long did it take you to write Intelligenz from start to finish?

Intelligenz took me about 18 months to write. I could have written it quicker if I had been stricter with myself in those first 6 months.

My editing process kind of starts from inside my head. From the get go I already know how many words I want my novel to be. So with Intelligenz I said no more than 100,000 words. To me that’s already an edit. Then when I write I may complete a chapter and then go over it and make changes. When the entire book is done I read the whole thing and see if I can make changes and shorten chapters or add to others. A particular example is that when I finished the book and read through it, I felt Clara, one of my main characters needed filling out a bit, so I added things about her having a boyfriend and their relationship ending somewhat acrimoniously.

What was the most challenging part about writing Intelligenz?

Although Intelligenz is more character driven, at its heart are science concepts and I had to do a lot of research into the human brain and how ion channels and synapses work. The hardest part I found was writing about these elements in a way that wouldn’t confuse a reader and making the scenario I was actually confronting the reader with plausible.

I plan to start writing the follow up to Intelligenz, the second book in The Dark Atlanta Series in January. My two lead characters will be sent on another entirely different undercover assignment that will test their resolve even more than the first.

Are you working on something right now? If so can you tell us about it?

At this very moment I am not working on anything but I have ideas for the second DAS popping up in my head all the time so it’s as if I’m working on something already.

Atlanta, Georgia. Something disturbing is happening at one of America’s most successful tech companies. A girl is found dead in her home shower cubicle. A home linked to the Intelligenz corporation network of technologically advanced gated communities. This suspicious death, in a world where everything is scrutinised by the media, sets off unprecedented interest.

A young rookie journalist, Clara Flockhart, is assigned by her chief editor, Eric Nash, to investigate the strange happenings at the Intelligenz compound. An assignment that will plunge her into the unknown and lead her straight to the man whose company is being rocked by events outside of his control, Brandon Bloomfield.

At the same time, a young college dropout, Karl Jones, has his own suspicions about the recent death and the gated community that has overtaken his neighbourhood. Suspicions that will see him undertake his own exploration of the Intelligenz compound, he calls the fortress.

As the body count climbs and the nanotechnology, Intelligenz has secretly guarded, comes under scrutiny, the mysterious riddle as to what is actually happening deepens.

Is there a saboteur lurking within the corridors of the fastest growing company in America’s corporate history? Or does the darkness come from an unlikely source.

Lloyd hails from London, UK, and has always been fascinated by the power of words and books. As a child he engrossed himself in books, his favourite author being Roald Dahl. Years later, he was reading his brothers X-men, Spiderman, and all other super hero comics. Soon after, he would try his hand at writing short stories, mostly grizzly stories dripping with horror elements.

It wasn’t until he was at university studying business and marketing, he decided to fulfil his lifelong ambition of writing a full length novel.  ‘The fight for Naturah’ was born, a science fiction fantasy epic set in a parallel universe. The idea for his second novel sprung from the technological revolution that has immersed our world – what with social media, the internet, and the proliferation of gadgets and gizmos to aid our lives. The dark Atlanta series: Intelligenz, is the first book of an intended series and is a science fiction psychological thriller that examines the perils of our fascination with technology. The first book is published through shiftingpaperpublishing.

Lloyd will soon start work on the next instalment, so watch this space…