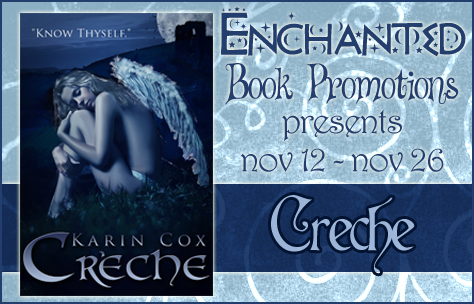 I’m interviewing Karin Cox today, author of fantasy / paranormal romance novel “Creche”. Thanks for answering my questions, Karin, and welcome to my blog!

I don’t think I “knew” that I wanted to be an author as much as I always wanted to write, so I did and always have done. I worked as an editor for fifteen years—I went pretty much straight from my English Literature degree into editorial assistant positions and worked my way up—but writing was always a long-term goal. I’m glad that I paid my dues, in some respects, and didn’t just rush out and publish the first thing I had written. Writing well is a pretty steep learning curve. While working as an editor, there were times when I had to step in and write, and it made me realise that I could do it. Eventually, when the company I worked for needed an inhouse author for some jobs (travel guides at the time), I stepped in. From there, I honed my skills for a few years on natural history and non-fiction before mustering up the courage to actually publish the fiction and poetry I’d been writing behind the scenes for a long time.
Where did you get the inspiration for Creche?
Creche grew quite naturally out of the seed of the idea from Cruxim (which actually started as a 1000-word writing prompt at Byron Bay Writers’ Festival and then grew wings of its own—pardon the pun). As a second book in a series often will, Creche took itself to where it wanted to go, and that was more toward the light than Cruxim’s dive into darkness. The inspiration for the Creches and the high fantasy world I created with the ten different (sometimes opposing) Creches came from lots of different places. I keep Pinterest boards for each book in the series (you can check out the one for Creche here http://www.pinterest.com/authorandeditor/creche/) and post up images that act as my inspiration or mental “jogs” for characters and places, but I suppose I also drew from the history of high and epic fantasy, and from remembering authors I loved to read when I was younger, such as Tolkien, Herbert, Lewis, Rice, Peake, and Renault.

How long did it take you to write Creche from start to finish?

Creche took a lot longer to finish than Cruxim. I was very nervous about its progression and how it would be received. It took me almost a year, but I wasn’t able to write full-time due to family and editorial commitments. Funnily enough, I’ve had a lot of fans say they like it more than Cruxim because it is not as dark or torturous. Of course, the important thing is the narrator’s growth (Ame’s growth), and he has to grow from dark to light or what will be the point? I really love to emerge myself in nitty gritty and throw a lot of conflict at my characters. My aim is to really challenge their sense of self, and sometimes that can get very bloody, but I also want them to ultimately change for the better, and for their own courage, grit and strength to move them towards light and peace.

I consider myself a much better editor than I am a writer, because I’m very familiar with the editorial process. Of course, editing your own work is always harder than editing someone else’s, and it is almost impossible to edit your own work to a publishable standard, so I always use an independent editor and a proofreader. I find finishing the first draft is always a huge relief for me. Once all of the words are there, editing is easy by comparison (for me at least). I tend to have to add words at editorial stage rather than remove a lot, and sometimes I even add entire scenes. I also work in the theme a lot more, remove excess commas (I’m sure my proofreader was pulling her hair out over my pausal commas!), simplify some sentences, and add in question marks (I tend to leave them off). For this series, I also tried to tone down the purple prose in places, even if I quite like to write lyrically for a gothic style.

What was the most challenging part about writing Creche?

As a writer, my biggest challenge has always been being able to let go and just put words on a page. I have had to force myself not to self-edit as I go by using a program called Write or Die and setting its level to “kamikaze,” which means if I don’t keep up with a strict word count it will start to eat my words or play babies crying at me really loudly. Once I have the words down on paper, I do a lot of editing and very careful word placement to ensure that everything flows and works out as it should, but my natural inclination is to obsess over making everything just how I want it to be. If I let myself work like that, it takes me forever to get my work out and sometimes I can prune it too far and end up losing the life in the words.

The first is to finish Creed and then to publish What the Sea Wants. Part of me thinks it will be nice to finish the Cruxim Trilogy, but I will also be sad to say goodbye to some of those characters. I’m very excited about What the Sea Wants, which will be my first contemporary romance. I have a lovely cover designed by Sarah Hansen, who created some fabulous covers for Colleen Hoover and other huge sellers in the genre, so I am hoping it will be well received.

I can give you a little blurb teaser for What the Sea Wants. It is a a contemporary romance young adult novel set in a fictional Australian town called Willow Bay and is about a young girl, Juliette, whose boyfriend is believed lost at sea in a boating accident. It is the story of their romance and growth from teens into adults, but also about hope, being yourself, and following your intuition.

Could you stop searching for the man you love even if refusing to let him go was sending you crazy?

Juliette Brewster has always been different. Bookish but beautiful, from the age of seven she has had premonitions of the future, but the one thing she didn’t see coming was the one thing destined to break her heart forever. When she catches the ocean-coloured eyes of school heartthrob and lifeguard golden boy Elijah Gordon, Juliette’s life changes for the better … until a tragic boating accident upends her world and claims the love of her life. Everyone else has given up, moved on, and put Eli’s death behind them, but Juliette can’t—and maybe she shouldn’t. But is she really receiving messages that Eli is alive, or will the sea claim Juliette’s sanity as well as her lover’s life? 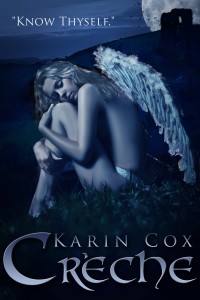 Still grieving the loss of Joslyn and the Sphinx Sabine, and craving revenge upon Beltran, his Vampire nemesis, Amedeo the Cruxim is destined to learn more about his past in the sequel to Karin Cox’s critically acclaimed gothic paranormal romance Cruxim.

When he meets a female of his own kind, Skylar, who takes him to the hidden stronghold of Silvenhall Creche to learn Cruxim lore, the secrets revealed in the holy book of the Cruximus, and the lies told to him by his own kind, force Ame to question who he is really is, where his loyalties lie, and whether there is anything he desires more than vengeance.

“I highly recommend Cruxim to lovers of true gothic horror and paranormal genres. This story provides a fresh spin on old-world vampire lore. I will be stalking this author for the rest of this series and beyond!”  Toni Lesatz, My Book Addiction

“I absolutely can’t wait to read the next installment in this series, Creche. This, to me, is like the next Anne Rice series. There’s a love story alongside some pretty gruesome and evil stuff. I like the contrast and the fact that both can live in harmony in a very well-written, character-driven novel. Bravo to the author, Ms. Karin Cox!” Kathy from Literary R&R

“I loved how the author was able to bring what was usually mortal enemies and have them work together to resolve the conflicts the characters encounter.” Rachel at The Jeep Diva

“Cruxim is filled with passion, revenge, action, and love all mixed together to form this story that is unlike any I’ve ever read. The ending had me in near in tears, but now I have to find out what fate lies ahead for Amedeo in the next book!” Sarah Jones, Give it to Cupcake Blog.

“I fell in love with the Cruxim. Amedeo is like no other paranormal hero. He’s not infallible. He bleeds, he grieves, he suffers in affairs of the heart and personal conscience. He must make choices that no man, or angel, should ever have to make. I recommend this debut novel by Karin Cox.” Bestselling Author Carol Davis Luce

“I thought the blend of paranormal and mythology brilliant. The grammar flawless. The prose, poetic. If I could give this book a higher rating, I would. It is simply the most intriguing, creative and original paranormal I’ve ever read.” Tara West from the Book Eclective

A wonderfully new, and fresh novel of vampire lore. A dark world of a wide range of oddities. It’s a story that you must read to understand the complex array of characters, and the remarkable way that Ms Cox has woven this phenomenal world in which they exist in. Karin Cox is most definitely an author that I will and look forward to reading more of in the future.” Anne from Angel Anne’s Reviews 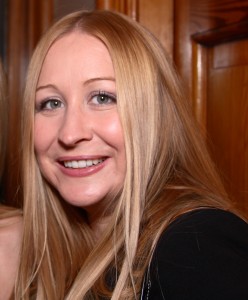 Karin Cox is an Australian editor and Whitley-Award-winning author. Since her first book was published in 2004, she has had more than 30 titles published across a range of genres, from children’s fiction and non-fiction, to novels, to non-fiction social history, natural history guides, and educational and coffee-table books. She is the author of Cruxim (a gothic paranormal romance novel) and its sequel Creche, Cage Life and Crows & Other Beasts (both dark, literary short stories), Hey, Little Sister and Pancakes on Sunday (illustrated picture books), and Growth (an anthology of poetry). Karin lives in Australia with her long-suffering fiancé, her daughter, her two dogs, and a cat with the improbable name of “Ping Pong.” You can follow her on Twitter (@Authorandeditor), or on Facebook at http://www.facebook.com/KarinCox.Author or http://www.karincox.com. Sign up for her mailing list to be alerted to new releases http://eepurl.com/vk_bP