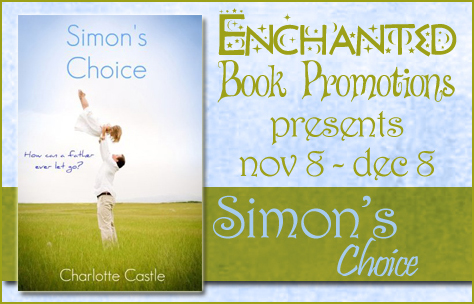 I’m interviewing author Charlotte Castle on my blog today. She is the author of contemporary drama novel “Simon’s Choice”. Thank you for answering my questions, Charlotte!

Actually the last thing I wanted to do was become an author. My mother is a successful author and in the way of many children, the last thing I wanted to do was the same career as my parents. However, inspiration for Simon’s Choice came and I suddenly found there was a story in me that I simply had to get out. It turns out I was a chip off the old block – I found an agent easily, a publishing deal and my second book is already with the editors. So, perhaps it was just meant to be.
2) Where did you get the inspiration for Simon’s Choice?
A random conversation with a friend. He blurted out that ‘if his daughter was dying, he’d tell her that he’d go with her’. I immediately felt there was a book in it and was writing a first draft only hours later.
3) How long did it take you to write this book from start to finish?
I was quick on this one – three months. I wrote for five hours a day, every day. More recently though my output has slowed down. Simon’s Choice is very character based and the words just flew out of me as the characters battled to tell their stories. Plot-orientated books – one’s where the story rather than the characters lead the prose – I find harder.
4) What is your editing process like?
For me, very simple. I’ve been lucky in that I’ve never been asked to make major changes or cut vast tracts of text. I edit the book twice – once on the screen, once printed out as a manuscript. Then the work first goes to my editor who makes any changes in plots, tense etc – for instance in my more recent book we’ve changed a number of names as they were jarring or confusing. She also edits the novel twice. THEN it goes to the copy-editor who does a final sweep for typos and grammar issues.
5) What was the most challenging part about writing the books?
Oh, self-motivation. True there are days when the words flow, but mostly it is hard, intense work, necessitating extreme concentration. It is quite amazing how many excuses you can come up with not to sit down and write. Facebook does not help. I am a master of procrastination and without deadlines I’m quite useless.
6) What are your writing goals for 2014?
Aiming to have my third book out by September 2014 – though the idea is only just marinading in my mind at the moment, so I’m afraid I can’t say anymore…
7) Are you working on something right now? If so, can you tell us more about it?
Publicity. My second novel ‘When I Was a Wife’ is released later this month. It deals with the disappearance of a very famous Lord after the murder of his children’s nanny… 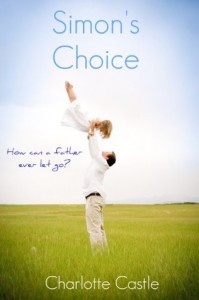 “But, Daddy? Who will live with me in Heaven?”

Doctor Simon Bailey has everything a man could ever want. Then his beautiful daughter is diagnosed with Leukemia.

He answers her innocent question in a moment of desperation, testing his marriage, his professional judgment and his sanity to the limit. As cracks form in Simon’s previously perfect family, we wonder, as do his loved ones … will he really make the ultimate sacrifice?

Combining poignant moments of both humour and pain, ‘Simon’s Choice’ is a penetrating account of parenthood at the sharp-end. 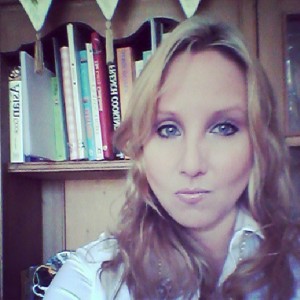 Charlotte Castle lives in the North Yorkshire countryside in a ‘madhouse’ full of children, dogs and cats. Simon’s Choice was her first novel – her second, ‘When I Was a Wife’ is due out in November.