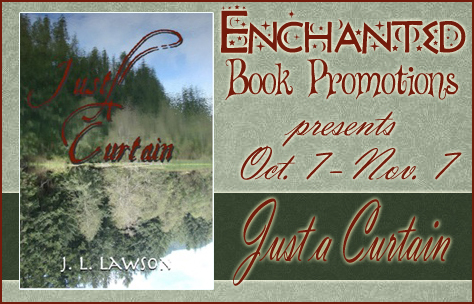 I’m interviewing J.L. Lawson today, the author of coming of age / adventure  novel “Just a Curtain”. Thank you for answering my questions, J.L.!

That’s a funny story. You see, I haven’t been a doctor, lawyer, policeman, firefighter, air traffic-controller or lion tamer; so picking a childhood notion of “What will I be when I grow up?” didn’t happen. While at University, I worked as kitchen clean-up and assistant at a few local eateries, took training in Ikebana and landed a relatively long term gig with a start-up florist near my home. I worked in delivery for them as well as for a Scandinavian furniture store—very high end—and also moonlighted, literally, as a night auditor for a respectable motel on the interstate at the edge of Austin. I still hadn’t thought of writing for a living.

My first job out of college—with a double major in Renaissance History and English Lit, with a double minor in Greek (Koine: the dead language, not the people or culture) and Roman Republic Culture—I apprenticed to paint cars in a Body Shop. Really, no kidding. I went back to college for an Associate degree in Drafting with a focus on Land Planning (Architecture would’ve taken too many years and I already had a family to take care of). I worked as a draftsman for a small but successful firm, then rose to Associate Land Planner for several years with the same company and was very happy there. I was not considering shifting to writing at this point either.

My Land Planning “career” was going along swimmingly until my parents, somehow, talked me into (read: guilted me numb) relocating to California and heading up a manufacturing venture my crazy Uncle Al had gotten off the ground. So I became a Plant Manager of a fully capitalized and operational bottling facility… for all of six months before no paychecks and hunger drove me from that farcical existence to the Bay area and Silicon Valley. No hint in my mind as yet that perhaps writing was a viable career path.

I worked as a research gofer for the Research & Development arm of the top hard drive manufacturer of the time. A contractor’s work life dangles by a thread; I learned the hard way. I later contracted with a major Aerospace corporation after an interlude of early mornings throwing papers for the local Santa Cruz rag pursuant to being left jobless during hard times for the hard drive company. I rose through the Engineering Standards department, was made a permanent employee—with all the classified and top secret clearances attendant on that employ, and was offered the prestigious position of Department Chair. As fate would have it, that was when the economy went south, again, I and 40,000 other white collar folks found ourselves jobless again—last in, first out.. I headed back to Texas. It was over that non-stop trip with all my stuff in the back of my van that I realized I had gained the life experience and possibly the skills to venture into writing full-time. I had, during excruciating lulls in contract work, begun researching and sketching a rough draft of a science fiction novel. That had to wait.

I picked up contract writing and illustration jobs with the young an newly booming hi-tech companies then flooding into Austin, Texas. (Dell computer’s first ‘campus’ was just outside the back door of our building, where I hung out during smoke breaks.) Anyway, those contracts led to permanent positions and before I knew it I was back in the thick of the corporate world once more. One thing led to another and I ended up with a severance from IBM—don’t ask—and a solid nest egg of a retirement account. My wife, the second and last, and I relocated to some acreage in north Texas. I designed a system of ponds on these fourteen acres, had foundations built overlooking the largest of them, and proceeded to build our house from my own plans. Really. I plumbed, wired, erected the walls, the roof the gardens, everything, with erstwhile help from friends and the occasional contractor for things I couldn’t get permits for myself: Septic fields, transformer installations, etc. Perhaps it would finally be time to pick up my keyboard and finally start writing…

Then, from out of the blue, I was asked to step in for an ailing teacher. I went on a substitute assignment at a little private school in a nearby town—where one of my neighbors was at that time the science teacher. The few days initially requested turned into an entire semester and a half… Then ten years later I was still there, the only Literature and Composition teacher for all four grades of the high school. I graduated hundreds of great students over the years… and some who weren’t such great students, I just loved them anyway. Then came the my nemesis, the Overlord, once more into my life—the Economy—and that’s when I finally settled down once and for all at my laptop and started storytelling. That, my dear readers, was three years ago. After my first volume of the trilogy was compiled, edited and the cover art was in place, I spent a chunk of money on, what I later found to be a poorly connected independent publishing house. When my later books were ready for publishing I decided that I could do just as good a job outsourcing my needs as that first indie publisher had. I was corroborated in that decision by a rep from Voyager Press. They were transparently independent, had the experience I was just beginning to gain and offered me the confidence and guidance to pursue publishing on my own. A short while later I actually added my meager efforts to their on-going work—which is why my FB page says: “Head Whipping Boy at Voyager Press.”

I have published, independently, sixteen books. I am an integral part of a private publishing firm—all work and no glory, I’m afraid—and I get to read and offer edits to other writers’ submissions in addition to continuing my own writing!

Now I’m sitting here chatting it up with ya’ll. What a great job; I couldn’t be happier!

Where did you get the inspiration for Just a curtain?

Actually, this book was written inside out. That is to say I wrote six short stories—the final six chapters of the extant novel—and published them as “Six Leaks A’Leaking.” They highlight the dominant ways we as people are drained of the energies necessary to do anything more than barely get through our daily lives, let alone strive for anything higher. After a lengthy camping/road trip with my wife last year, I realized that those six stories begged a champion, a character amongst those included who could offer the antecedent direction for what were already herculean endeavors. Hence: the coming of age story of Dashiel Drummond as the first part of the book.

How long did it take you to write Just a curtain from start to finish?

Let me start with how I write. Every day, from around seven-thirty until around four. I sit down at my laptop, cover the previous evening’s email, find where I left off the day before and relax. The characters then take over for the next eight hours or so and I chuckle, shed a tear, hold my breath and sigh at everything they attempt to do—and sometimes accomplish. Then I get up go down to the smoking porch, open a beer have a smoke, and start “pre-writing” for the next day. Have dinner, check the weather forecast, go to sleep, get and do it all over again.

Then once the whole book is drafted, I sit for hours and days reading slowly back through every paragraph and chapter, emending as I go. Then when that’s as much as I can take, I pass it off to one of the Voyager Press editors (we have an understanding: just because its mine, it doesn’t get special treatment). After that process is concluded, I proof it one more time before sending it off. That’s it.

What was the most challenging part about writing Just a curtain?

Actually, as much as I’d like to say I remember every single character from the trilogy and Saga, I don’t. And so the most difficult parts of writing Curtain were when I needed to dove-tail passages with the extant future histories in the rest of my work.

What are your writing goals for 2013? Are you working on something right now? If so, can you tell us more about it?

I am in the midst of The Elf series at present,–the fifth installment actually: The Elf & Erin’Los is its working title. There maybe perhaps a dozen, or not, of those before I’m done with them—-each is only a couple hundred pages; the first three I wrote in nearly as many weeks earlier this year.

Then life decided I’d had too much time simply writing and brought other urgent activities my way. Let’s see, where was I? Oh…

I would like to think that once my readership gets beyond the few hundred it is at these early stages of release, I’d be amenable to responding to specific suggestions or requests for expanding certain characters’ lives adventures, etc. Or even continuing the Saga beyond the seventh generation of Livingsons—that actually does appeal to me to great degree. 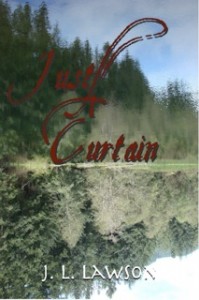 “If you had virtually unlimited resources and a pristinely practicable imagination, and a knack for turning air into butter, what do you suppose you’d do next?”
—Tera Elphinstone, Drummond Group Director

Just A Curtain is the remarkable, fast-paced gateway to both The Elf series and the grander epic recorded in J. L. Lawson’s other works: The Donkey and The Wall trilogy and The Curious Voyages of the Anna Virginia Saga.

Just A Curtain chronicles the remarkable life and achievements of Dashiel Drummond and the capable group of people he gathers around him to make a change for the better in the world in which he finds himself. A coming of age story, orphaned at sixteen, he rises through the angst of adolescence to the challenge of fulfilling the promise of his potential—from ranch hand and welder to the pre-eminent global entrepreneur and builder of starships.

I am a father, a grandfather and a “Came-to-Writing-Professionally-Late-in-Life” kinda guy. After rewarding careers as a Land Planner, Standards Engineer, Technical Writer/Graphic Designer, and as an Educator (High School and College Literature/Composition) I settled down at the laptop and began storytelling for a living. My wife and I live in the Cross-timbers country of North Texas and spend as much time seeing this amazing country, its National Parks and Forests, as we can manage.

My own journey has taken me both far afield and deep within. It is a journey, no doubt, similar in nature to many seekers’ travels who have come before me. However, an unconditional commitment to the work is the trait of only a handful of those who set their aim very high indeed, and then to find a guide who knows the way through this rarely known land, is without question what all others have equally sought. Some gave up the search, some became distracted by the lure of other interests, many became satisfied with the knowledge they had already gleaned from their initial searches. There is, in the end, only so much gold.